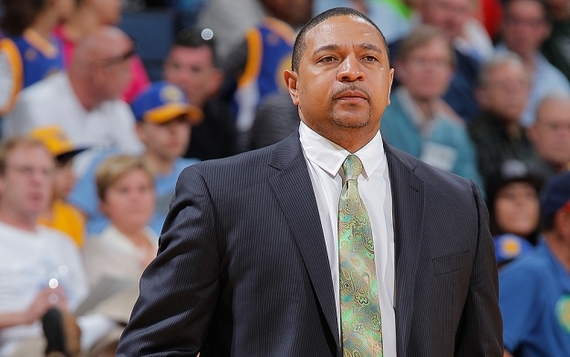 Photo by the Warriors

Oakland, CA - It took thirty-three games into the season before the man who sculptured a winning team returns for the first time since his firing last May. The Golden State Warriors are the best team in the NBA. That wouldn't have happened without former head coach Mark Jackson. Tonight he will be apart of ESPN's broadcast team who will cover the Warriors vs Cavaliers game in Oakland.

A bitter-sweet reunion for a man who would still be coaching this team if things didn't go sour between him and senior management. I'm sure Jackson is not expecting any extra fan fare or red carpets to be rolled out in his return. But he should prepare for his former team to embrace him just as if he were still their head coach. What he did over the course of three years is why this team is number one.

"I can't wait to see him," said guard Klay Thompson. "He's a great friend and great mentor to me. We absolutely would not be where we are now without him."

"He gave me my first opportunity to showcase what I could do, so I'll forever thank him," forward Draymond Green said. "He taught us a lot, and he really helped turn this organization around."

Stephen Curry has blossomed into one of the top point guards in the league and leads the NBA All-Star balloting along with LeBron James. Thompson has emerged and is off to the best start of his career. And Green has been absolutely phenomenal in the starting lineup. Without James tonight, Cleveland has been out shinned by Jackson's return. The Cavaliers haven't been much of a threat lately and Golden State takes no mercy for struggling teams.

The Warriors are off to the best start in franchise history. At the helm of current coach Steve Kerr, this team has absolutely nothing to lose. Everything seems to be working both offensively and defensively. Kerr is a coach whose won multiple NBA Championships. He's the icing on a well prepared three-story cake. It'll be a hard pill to swallow but Jackson finally gets a close up look of the team he once coached that's no doubt the best in the league.

"He set the tone and changed the identity of what it meant to be a Warrior and be a relevant team in the playoffs," said point guard Stephen Curry. "I would say he was very successful at his job for those three years. Obviously, it didn't end the way he expected or the way most of us expected."