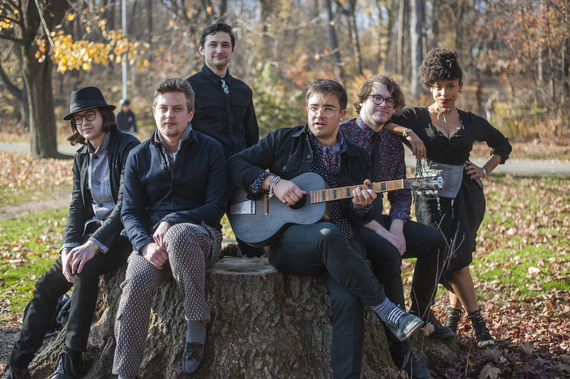 Great Caesar's new EP captures a future-great band at a formative moment in their history. You will want to remember how you felt when you heard them like this.

I am maybe the worst person on Earth to write this review.

Great Caesar's publicist contacted me out of the blue to record an interview promoting their new EP, Jackson's Big Sky. It's unclear to me whether it was clear to them that I knew John (-Michael Parker, Great Caesar's frontman), or that I was good friends with John, or that I work with John, or that once upon John was the very first member of a class of people--Dream Directors--whom my company (The Future Project) helps place into high schools across the country, or that I adore John with all my heart.

Moreover, it was very clear to me that although I've scribed many a piece of music-criticism, I've never once advocated for someone to get excited about an EP--or go stream an EP, or go download and EP, or go purchase an EP, or go act like an EP in any way really matters very much. Certainly I personally have never purchased an EP, nor do I know how to go about purchasing an EP if I wanted to. Like voter-ID fraud, it's a thing I hear a lot more about than I see with my own two eyes.

So it looks like an objectively-framed critical assessment of a new EP I'm encouraging you to go stream/download/buy is sort of out of the question, isn't it?

Alright then. Forget the EP. Forget objectivity. What I know is this: when someone very close to me got sent to jail last month, I typed and deleted maybe three e-mails to my Mom, scribbled and erased maybe six vacuous condolences and hollow expressions of sympathy to his, and instead Facebooked them both a YouTube link to the Great Caesar prison ballad "Hey Mama"--because what could I possibly say better, more profoundly, and more powerfully than this:

Hey Mama, it's good to see you
And I'm gonna need you to pray for your son
'Cause Mama I really miss you
And I promise the disappointment is done.

Great Caesar is a band that will center you on the meaning of your own experiences, and will open up a window to help you peer into a more expansive world.

"This is our first real statement," John says when I ask him why anyone should care about Jackson's Big Sky. So the question becomes: what's being stated?

John's music takes the narrative immersion of classic country and blends it with the jubilant rapture of chamber pop and indie rock. What comes through are two things: sincerity and other-directedness. Very few of Great Caesar's songs are actually about the kinds of things you'd expect from a ragtag crew of well-educated late-twentysomethings who have been playing together since high school: the usual meditations on growing older; musings over responsibility; tensions between 'stability' and creative wanderlust, etc., even though those themes weave themselves throughout the bulk of my conversation with John. Instead, Jackson's Big Sky succeeds at acknowledging the reality of those perspectives while exploring the journeys of other people at equally formative--but meaningfully divergent--stages in their own lives.

"I often write about experiences that I haven't had--that are beyond me," John says. "I haven't written a song that is like: 'This is how I feel today.' But maybe what I'm doing is capturing the space around it." The result is a sincere appreciation for the deep inclusiveness of the human experience. A father returns to an abandoned son. A prodigious young girl from rural Ohio waits for her boyfriend to get out of prison. A religious penitent contemplates the impending toll of the bell of mortality. A teenager makes love for the first time. In each case, Great Caesar takes it as a given that the experience they're describing is intrinsically valid and valuable, and attempts to explore the significance of what that reveals.

I mention as much to John. He smiles and adjust his glasses. "I don't think about that that much," he says. "I don't walk up there with that intention--I walk up with the intention to be authentic, and I think that comes through."

This is why I'm a critic, and he's a musician.

It's important also to emphasize, of course, that Great Caesar is crazy fun. Fans of the band will recognize the sports-chant singalongs and elated bursts of brass. For newer listeners, polished-but-playful hooks earworm their way into memory and take hold before you even realize you've started humming. There is, however, a refreshing attention to discipline that reflects the band's crisper, more integrated sound in the wake of saxophonist Stephen Chen's departure for Ellis Ludwig-Leone's touring orchestral phenomenon, San Fermin.

"The songs are much more intentionally-crafted" John points out. "They're really efficient--the words and the notes and the length. Although four years ago I was only 24, it feels like I was younger than that, and GC captured a raucous energy of that point in time--especially in our shows. As we've grown up a little, we've tried to button that up some more."

Is it a bit too buttoned-up, though?

"I don't want the experience to be, 'ahh, sophistication!'", he explains. "But there's an element to it that's...yeah, like, a desire to be revelrous, but with your collar up. Because there's a certain realness you have to confront at this point in your life. I had a guy come to one of my shows--he's a doctor. We went to school together. The path he's taken was the exact path I was going to take--go to Yale, go to Med School, be a doctor, be this shiny thing that makes people proud. And to see this guy living a life that was so clearly what I would have been--because we had just been there together--and now we've diverged. It makes me proud to hold on to the 'dreaminess' of being musical, but if I'm honest, I'm a bit insecure about what I have to say for it. He saves lives on the regular; we play shows in bars for 65 people. People say it's cool, but I'm sort of ashamed."

A big part of Great Caesar's maturity arrives via the accompaniment of supporting vocalist Niki Morrissette. A counterweight to John's obsessive intensity, she's also pushed him to increased levels of technical sophistication. "She's opened my, and our, vocabulary--our expressive potential," John says.

The highlight of their collaboration is "Jolene," the album's standout track (and not the Dolly song), where their yearning middle-of-the-road refrain underscores the distance and difficulty of the better future their characters want to pave. "She takes the story and the lyrics so personally," John says. "When I sing that part with her onstage, it feels like a TV thing--like, who does that, who literally looks into someone else's eyes and sings with them. But we do that, and I have experienced that with Niki in a way that feels so true and genuine. The empathy is really resonant: a little somber, a little concerned, but there's fundamentally an openness that you can sense every single time."

I highlight the elation along with the budding maturity because it's the reason to listen to this EP. Great Caesar will release more albums, and they will be good albums, and they will be great albums. But it's at this particular moment you get to witness that goodness and that greatness taking root. Jackson's Big Sky reveals a unique combination of ambition, discipline, technical excellence, and good old fashioned storytelling that comes along only a few times in a generation. It's dense with a rare authenticity that knows almost no parallel in music--the closest example might be Jonathan Blow in gaming--and reflective of a guilelessness that most directly evokes Kimya Dawson. The end result is a satisfying appetizer to what will become, over the years, an exquisite feast of sound.

"What I can do," John emphasizes after he tells me the story about the doctor--differentiating his own skills from from his doppleganger's--"is take you on an emotional journey through a sound that seeks beauty and seeks fullness." This is why we listen to music, and why Jackson's Big Sky is worth our time.

Great Caesar is playing at the Marlin Room in Webster Hall on March 31st, along with Parlour Tricks and Flint Eastwood. You can stream Jackson's Big Sky here.