Ohio State's national championship win Monday night inspired many fans to celebrate, but for 15-year-old Jacob Jarvis, who lives with a degenerative muscular disorder, the win meant so much more.

The Buckeyes superfan has been a presence on the football team since July 2013, when head coach Urban Meyer met Jacob and his brother, Noah Studebaker, on the sidelines during a summer players' camp. Both boys have Duchenne muscular dystrophy, a fatal disease for which there is currently no cure. 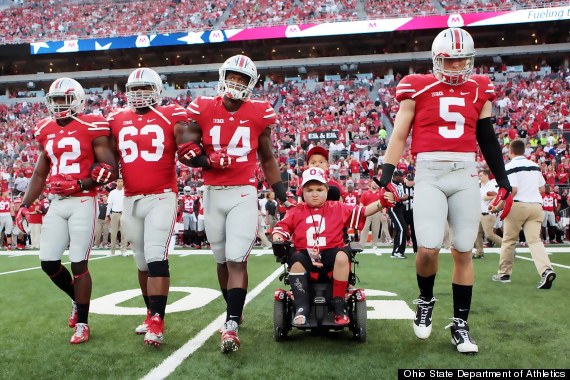 Jacob (center right) enters the field with OSU captains for October's game against the University of Cincinnati.

Jacob and Meyer connected immediately, reports the Columbus Dispatch, by throwing a football back and forth -- with Jacob in his wheelchair and Meyer giving him pointers on throwing a spiral.

“I saw an incredible spirit,” Meyer told the Dispatch, describing their first encounter. “His eyes were just glistening, being in the [stadium], on the field."

From there, young Jacob became a fixture on the team. In October, he and Noah were named honorary team captains, a title which earned the brothers pre-game coin toss duties and the game ball.

"I was trying not to cry," Jacob's stepfather, Chad Studebaker, told Yahoo. "It was just a very emotional stage. Just, our family facing the whole team and I didn't see too many dry eyes among the players. That was a very emotional event."

An emotional event only to be surpassed by the team's championship win on Monday, that is, after which Jacob got to hoist the trophy:

This was an awesome moment right here with @JHeuerman86 and Jacob Jarvis. pic.twitter.com/DTVFeS1XCm

"It's my team," Jacob told ESPN of his deep connection to OSU. "My team loves me."

WATCH ESPN's touching look at Jacob's involvement with OSU, above.