Author Jacquelyn Mitchard's life has been marked by epic luck: massively good and heartbreakingly bad. She lost her first husband to cancer, and had three young sons to support. Then she wrote a novel, "The Deep End of the Ocean," which was the first-ever selected for Oprah's Book Club in 1996. It went on to sell five million copies and become a movie. Mitchard remarried, had six more children and moved into her dream home in Wisconsin. And then in 2009, she lost her entire fortune, including her children's college funds, when she was swindled by a financial advisor her husband had hired. She ended up applying for food stamps to survive.

"Two If By Sea," Mitchard's new novel, is a thriller that opens with a tsunami in Australia. A former police officer, who has just lost his wife in the flood, saves a small boy from drowning -- a boy with special gifts. The man shelters the boy from criminals trying to exploit his powers, and in the process, begins to recover some of his faith in life. I recently spoke with Mitchard about the novel, and what it takes to move forward when everything falls apart. Here are the highlights of our edited interview.

What was it like to navigate the heartbreak and success of the last two and a half decades? How did you have the courage to keep moving forward when many people would have simply shut down?

I guess you can't really call it courage, because courage requires having a choice. And I didn't have a choice at all. I was surrounded by people depending on me to figure a way out of these circumstances. I don't think I bounced back; I took small handholds and found my way back up. I needed to be an example for the children I'm raising. No matter what kind of hole life drives through you -- even if it's a hole big enough to drive a truck through -- you don't really have permission to live a small life. I wanted that to be my guiding principle.

When you navigate a shattering experience, there's the philosophical aspect -- deciding you'll keep it together for your kids -- but there's also the practical day to day. What wisdom do you have for someone who is trying to move forward from a trauma?

Some small grace -- a good cup of coffee, or hearing one of [your] kids sing -- is sometimes enough to get you to the place where you can put yourself in bed at night and hope that the sun comes up tomorrow morning. And sometimes that was all it was -- thinking, 'I've navigated one ordinary day and nothing bad happened.' Learning to live that way is difficult to me, because I tend to live in great leaps rather than small steps. But I've had to learn that sometimes you really do need to focus on one day, one day, one day -- and they pile up. 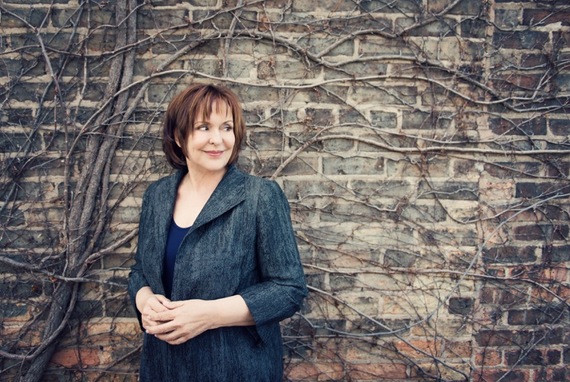 How much of the character of Frank, the former police officer, and the story overall was informed by your own experiences of trauma?

Much more than I realized. Frank [is] someone who tumbles reluctantly toward being a hero. He never wanted these things in his life, he never prepared for them or saw himself at the center of an epic drama. Then one thing happened and it set off a chain reaction and suddenly he was thrust into taking care of this kid. I wanted the ability to survive the extraordinarily bad with extraordinary grace to be part of this story. But I didn't know it related to me [when I was writing it].

Parts of your book are a love letter to Madison, Wisconsin, a place where you built your dream home and had to leave after the financial loss. Why did you make it central to the setting?

I'm helpless to forget my Midwestern roots. I live a mile away from the ocean in Massachusetts, which is a wonderful place. But the character of people is perhaps a little bit more wintery at the core than in Madison, where if you run your car into a ditch, someone is going to help you. I grew up in Chicago and lived in Madison for 100 years and in my dreams -- I get a little weepy when I talk about this -- I'm on that farm again where our kids started to grow up. I guess a big story like this, that takes place on three continents, demanded that broad Midwestern streak of possibility and decency.

Some people were actually hostile when you went public with the story about being swindled. That shocked me -- especially because you grew up in a middle-class family, and wrote your first novel as a widow raising three boys alone. It's not like you inherited the money. What do you think was going on there?

Even on this book tour I did get a whiff of this feeling that I had somehow lucked into the success -- in fact, [someone said] 'easy come, easy go.' It's heartbreaking to me because I never realized that people would have that kind of attitude toward anyone who was the victim of misfortune. But perhaps especially toward someone who worked really hard for it. Because it sure wasn't easy, and seeing it go was extraordinarily painful, [like] having surgery in the woods with a stick. One of the only reasons I talked about it at all [was] people [with similar experiences] wrote to me through friends to say how much shame they felt. And that broke my heart. Why should you be ashamed? That's like being ashamed if someone ran up to you in a city and stole your purse. That's not your fault.

You have written more than 20 books for adults and teens. And yet you once told an interviewer that you still live with self-doubt. Talk about the most challenging part of your work.

I know a great many writers who enjoy the process the whole time -- they're happy, they feel like they're channeling wisdom from the universe, they feel assured because they've been to this rodeo before. I'm not that way at all. It's all hard for me. Every part of it is as hard as it was at the beginning. In fact, it's harder because I know what I can do wrong. I didn't know that when I wrote "The Deep End of the Ocean."

You recently completed an MFA in creative writing; you're an editor at Merit Press, which publishes young adult novels; you teach as well as writing your own books. And you still have children at home. Talk about how you try to balance it all.

There's no hope for me to balance anything. I'm really disciplined and I keep track of everything. But it's an illusion to think I can control anything in my life. I try to put first things first -- the kids, my health and the jobs. I hope I have my priorities in decent shape. But I've never been bored a day in my life. And I'd love to know what that feeling is like. I'd love to wake up and say 'I don't know what I'm going to do today.' Because I've never had that experience.

Someone once asked what you wish you had known when you started out, and you said 'how many ups and downs there would be.' Would you really want to have known that, given everything you've gone through?

No. Now I look back on that and think 'what silly little girl said that'? Any of us, if we knew what was around the corner, and how much it was going to strip the very hide off us, would not want to get out of bed in the morning. And you don't want to live your life in fear. So I guess it's better that we don't know that we're standing -- all of us -- on the trap door, and someday it's going to open and we're going to fall. Planning is an illusion. You can't really plan your life. You can only hope to retain a certain level of good practice and integrity. I guess if I had a tee-shirt it would say: 'Be Brave. Try to Do Good.' That's it.

Finally, what is your idea of perfect happiness?

My idea of perfect happiness is a midsummer day without mosquitos, sitting in my brother's driveway watching my kids horse around on their skateboards; telling stories about what it was like to grow up on the west side of Chicago when we were kids. It's the simplest sort of connection with people that I trust -- that's absolutely heaven on earth. And sweet corn. I get people to send me boxes from the Midwest. The smallest things are what I am grateful for.

Jacquelyn Mitchard will speak at the Des Moines Public Library on April 6. Check out my podcast interview with her here.