Authorities in Nevada are trying to locate a missing child who was in the care of a woman later arrested for stabbing a co-worker at a Las Vegas casino.

Jade Morris, 10, was last seen Friday by family members, when she got into a red, 2007 four-door Saab with her father's fiancee, 50-year-old Brenda Stokes, also known as Brenda Wilson. Jade's father was out of town at the time.

"Jade went shopping with [Stokes] at about 4:50 p.m., but by 9 p.m. they had not returned," Morris' godmother, Ni'cola Mitchell, told The Huffington Post.

When Stokes failed to return with Jade, the little girl’s mother contacted police and reported her missing. The girl's mother then learned Stokes had been arrested at the Bellagio casino, following a violent altercation with another woman.

According to the Las Vegas Police Department, Stokes was arrested at about 10 p.m. Friday, accused of slashing the face of friend and co-worker Joyce Rhone, 44, several times with "an edged blade."

Rhone survived the attack, but was admitted to Sunrise Hospital and Medical Center with deep lacerations to her face, police said.

Stokes told police she would have killed Rhone if casino security had not intervened.

Stokes referred to a betrayal that had ended her seven-year friendship with Rhone and said she recently had gone to a doctor because she felt as though "she wanted to hurt someone."

According to police, Stokes initially denied she had Jade with her Friday. She has since asked for an attorney, Mitchell said. 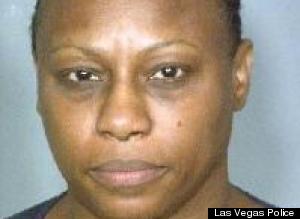 Contacted by police Wednesday, a spokeswoman for Las Vegas police told The Huffington Post that the investigation is ongoing.

Mitchell said she is very concerned for her goddaughter's safety.

"The police have only given us limited information so we don't even know where to begin searching," Mitchell said. "We just want to find her. We just want her safe."

Jade Morris is described as an African American female, 5 feet tall and about 70 pounds with black hair and a medium complexion. Her hair was in two ponytails and she was last seen wearing blue jeans, a blue shirt and a long brown jacket.

The Black and Missing Foundation is assisting Jade's family. The organization is urging anyone with information concerning Morris' whereabouts to contact Las Vegas police at 702-828-3111 or 702-828-2907 or confidentially via their website.