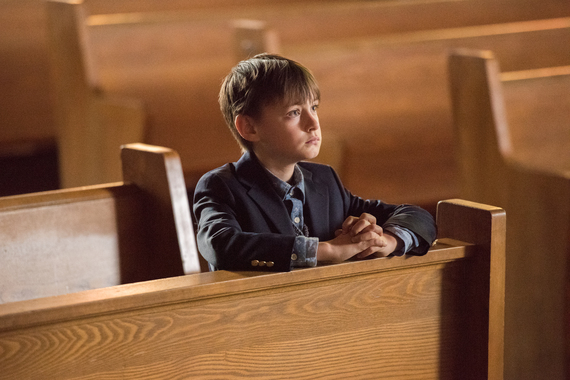 It's not every day that you meet a young actor that can hold their own against the likes of Clive Owen, but Jaeden Lieberher certainly can.

With the charm of a young Macaulay Culkin and the natural acting chops of a young Leonardo diCaprio, Lieberher will go as far in his career as his young heart desires.

In his latest role as Anthony in the film, The Confirmation, (which just hit theaters and is available on VOD) Lieberher portrays the child of a divorced couple struggling with the imposing religious views of his mother (Maria Bello) and an alcoholic father (Clive Owen).

I had an opportunity to connect with Lieberher about the role, what he learned from Clive Owen and his advice to young actors who want to follow in his footsteps.

Do you remember what your audition was like?
The audition was a little, I don't know how to put it. It seemed like a small, little place. I met Todd Hoffman, the producer, and Bob Nelson. They were just so nice, and I felt like I was at home right away as soon as I met them. They were just so nice. It was just a fun, quick audition, and I didn't feel too much pressure.