"The Kingdom's political system is rooted in Islam's traditions, which call for peace, justice, equality, consultation, and respect for the rights of the individual."

So, proudly, claims the official website of the Royal Embassy of Saudi Arabia in Washington, D.C. If you were to ask imprisoned liberal Saudi writer Raif Badawi, you may hear otherwise. Or not. He may not be able to tell you what he really thinks.

One of these coming Fridays, my friend Raif will be brought out in front of Al-Jafali mosque in Jeddah after Friday prayers, tied up, and flogged 50 times as the public watches.

It won't end there. He will be brought out and lashed again the following Friday. And then the Friday after that -- until his entire sentence of 1000 lashes is complete. 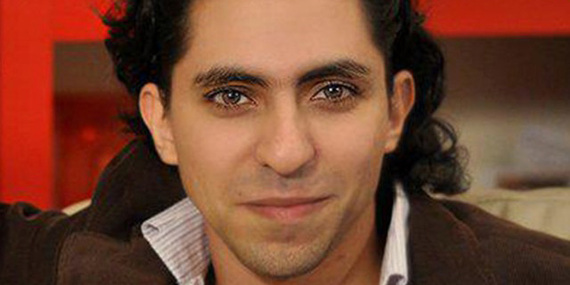 After attempting to appeal his initial sentence of seven years in prison and 600 lashes, Raif's sentence was increased this year to 10 years, 1000 lashes, and 1 million Saudi riyals (about $267,000). To add to that, his lawyer, Waleed Abulkhair, was also thrown in jail, allegedly for trying to set up a human rights organization.

Raif is being punished for expressing his ideas -- exactly what all of us are able to do here every day. He is officially charged with "adopting liberal thought" and "insulting Islam."

Having grown up in Saudi Arabia myself (read my account here), and in Pakistan, where writing or saying the wrong thing can easily land you in jail or dead, I resolved long ago never to take my freedom of expression for granted once I had it. When I think of what Raif, his wife Ensaf, and his three beautiful children are going through, it makes that resolve even stronger. What is a fundamental right for the rest of us has proved to be a costly luxury for them. That is wrong.

Again, I ask moderate Muslims and their influential liberal allies like Ben Affleck and Reza Aslan, who frequently conflate criticism of ideas and books with racism and bigotry, to consider how damaging their rhetoric can be to activists like Raif Badawi, their liberal counterparts in the Middle East.

Public floggings, limb amputations, and beheadings remind most Westerners of ISIS or the Taliban. But in Saudi Arabia -- the one country in the world that enjoys more unconditional U.S. support than any other -- they are the law, sanctioned not only by the government, but by the state religion. In the same month that the world was reeling with shock at the brutal beheading of James Foley at the hands of ISIS, Saudi Arabia publicly beheaded 19 people, for crimes ranging from smuggling cannabis to sorcery.

In 2013, Saudi Arabia was elected to the United Nations Human Rights Council. Last summer, Raif's case was brought up at one of its meetings in Geneva by Josephine Macintosh from the Center for Inquiry. Saudi Arabia attempted three times to shut down Macintosh's statement, but was successfully overruled.

It is now time to start holding Saudi Arabia accountable.

Last month, Raif Badawi received the PEN Canada One Humanity Award in Toronto. The award is given every year to a writer whose work "transcends the boundaries of national divides and inspires connections across cultures."

My partner Alishba Zarmeen and I had the honor of attending the ceremony, where Raif and his family requested that Alishba, a Pakistani secular activist, accept the award on his behalf.

Below is her speech, with a complete transcript, as well as remarks from PEN Canada president Philip Slayton and patron Florence Minz, who funds the One Humanity Award.

Since the beginning of human societies, we have seen injustice and violence justified in the name of nationalism and religious duty. Countless innocent men, women, and children have been victims of torture and genocide because of our poor understanding of human rights and civil liberties. Before the advent of modern science, human beings had resorted to the tactics of dehumanizing the "other" simply because of a different skin color or spoken language.

Today, we live in a modern scientific era where our species has seen the universe beyond our solar system and where racism, sexism, and censorship are not accepted norms but taboos which have no place in a civilized society.

Alas, not every citizen of this planet knows what it feels like to have equal opportunities and the freedom of thought and expression. Raif Badawi is one such victim of gross injustice and a prisoner of conscience, suffering from blatant violation of human rights. He is imprisoned for nothing more than daring to think for himself and having an opinion about the world he lives in.

Raif Badawi is a father of three young children and the loving husband of Ensaf Haider. His wife's name literally translates into "justice." She is spending her days in Quebec, fighting the injustices her husband is a victim of.

Raif is a friend and brother in humanity who wants nothing more than to make this planet a better place for its inhabitants. And he is not alone in this fight. We stand with him and support him.

Raif's sister, Samar Badawi, is also a dedicated human rights activist, fighting for women's equality in Saudi Arabia and trying to free her lawyer husband, Waleed Abulkhair, from the same injustice her brother is being subjected to.

I want to take this opportunity to call upon the Saudi authorities to take a moment and seriously reflect on how it wants to be seen as a country in the international community.

Does Saudi Arabia want to be a country which is admired for its cultural gifts and seen as symbol of tolerance which it claims the Islamic religion preaches? Or does it wish to continue to serve as a reminder of outdated legislations and an example of a dystopia which refuses accept humanity, compassion, freedom, and reason as the fundamentals of a society?

It is time for Saudi authorities to decide if they really want to treat Raif, his family, and others like him the same inhumane way the Quraish tribe of Mecca treated Muhammad, the prophet of Islam.

I will close my statement with a message from Raif Badawi:

For more on Raif Badawi's case and how you can get involved, click here.