Warning: This story includes images of dead and injured animals that may be disturbing to some readers.

OREFIELD, Pa. ― Animal advocates on Friday released graphic footage from a celebrated Pennsylvania farm that has provided the White House with Thanksgiving turkeys for over 50 years.

The images show birds with mangled beaks, broken legs, missing eyes, open sores and facial lesions. In one scene, turkeys peck and nibble at a young bird’s festering wound. In another, a decaying carcass rests on the floor among live animals.

The footage was taken at Jaindl Farms, a sprawling turkey operation that raises 750,000 birds a year and also supplies high-end grocery chains including Whole Foods.

It was recorded by members of an animal advocacy group, Direct Action Everywhere, that has launched a petition calling on President Barack Obama to stop accepting turkeys from the farm.

After viewing the footage, David Jaindl, the farm’s owner, invited The Huffington Post to visit and photograph his property ― an exceptionally rare offer in an industry whose operations are usually hidden from public view.

Jaindl said he is “committed to animal welfare” and that the grisly images present an “inaccurate depiction of our farms.” He’s won praise for raising and slaughtering turkeys using practices that inflict less pain than standard industry methods, and his farm has received perfect scores on third-party welfare checks.

But to Wayne Hsiung, an attorney and organizer with Direct Action, this is precisely the point of his group’s investigation. Large industrial farms still subject animals to cruelty and intense suffering, he argued, even when they’re run by people who may mean well.

“A well-managed factory farm is something like a clean landfill,” Hsiung said. “It’s the nature of an industrial farm that it cannot be well-managed from a welfare perspective. It is in the farmer’s interest to confine the animals, to mutilate them and ultimately slaughter them.”

About 230 million turkeys were slaughtered last year in the United States, and roughly 40 million of those were consumed around Thanksgiving. Virtually all are raised on factory farms, where they’re housed in large barns by the thousands.

Turkeys in close confinement can attack and even cannibalize each other, so it’s typical for farms to amputate their clawed toes and sever or trim their nerve-filled beaks, painful procedures that are performed without anesthetic.

Frightened female turkeys struggle to resist as they are seized and have their sex organs held open by hand for insemination, according to people who have performed the work. Hens can be subjected to this process weekly for over a year.

Jaindl’s farm does not cut off birds’ toes, and it uses an infrared method to trim birds’ beaks that is less painful and more costly than traditional debeaking. But, Hsiung noted, turkey farms with the highest ratings from animal welfare auditors do not alter or mutilate their birds’ beaks at all.

Jaindl said his barns were less crowded than industry standards deem acceptable, and Hsiung agreed. Yet those standards produce bird populations of such generally poor health that the industry’s pre-slaughter mortality rates average 6 to 9 percent.

In other words, recommended industry practice results in about 18 million turkeys dying each year from aggression, disease and other causes. For perspective, that number amounts to about a quarter of all dogs kept as pets in the United States.

Dr. Greg Burkett, an avian veterinarian, said that crowding, even at industry-approved levels, was likely the root cause of many of the health problems he observed in the images from Jaindl Farms shot by Direct Action.

“Crowding prevents the birds from getting to food,” he said. “It causes the plucking and feather loss, the skin damage and disease, because the crowding forces birds to be competitive for space and weaker birds get pecked and picked on.”

“It’s a common thing to see out in the industry,” Burkett added. “That doesn’t make it right.”

Temple Grandin, a livestock industry consultant and professor of animal science at Colorado State University, also viewed the footage. “The management of this farm needs to be more conscientious and do a better job of culling and euthanizing sick or injured birds,” she told HuffPost.

Direct Action members practice what they call “open rescue,” meaning they enter farms and remove animals from situations in which they believe the animals are suffering.

On Nov. 9, activists removed three birds from Jaindl Farms, with plans to bring them to a veterinarian and then an animal sanctuary. The group’s volunteers also took photos and videos of the farm, as they had done during past visits dating to June.

Hsiung argued that activists may legally enter farms without permission when they have reason to suspect animal cruelty has taken place, and they have the right to commit more minor infractions ― like trespassing ― to prevent it.

As in many states, Pennsylvania’s animal cruelty law is mostly clear, but gets fuzzy when it comes to farm animals. Abuse and neglect of animals is considered a crime except in the case of “normal” agricultural practices.

“As activists, we want to test that exception,” Hsiung said. “By any definition of the word normal, this is not normal.”

Two of the turkeys they selected had severely injured legs, splayed out at strange angles. One’s skin was oddly pale and discolored. One was caked with feces. All of the birds were weak and bewildered, and could barely stand.

A veterinarian said that two of the turkeys were too unhealthy to survive and they were euthanized. A third is now being cared for at a sanctuary.

Days after the rescue, HuffPost visited Jaindl Farms at the invitation of its owner. As both Jaindl and Hsiung had attested, the housing units did not appear overcrowded by industry standards, and few birds had injuries as severe as those photographed by Direct Action.

Yet not all was idyllic. Here and there were turkeys with visible sores, and in one barn, farm employees rushed in to remove a bloodied turkey whose open wound was being pecked at by two other birds.

Obama has donated all of the dressed turkeys he’s received from Jaindl to local charities. The White House declined to comment for our story.

A Whole Foods spokesperson denied to HuffPost that it sourced turkeys from Jaindl Farms, but labels on turkeys sold at the grocery chain showed otherwise. Later, the company clarified that it does source turkeys from Jaindl’s free-range barns, which have higher welfare standards and allow the turkeys access to an outdoor pen. None of the adult turkeys in the footage released by Direct Action were from those barns.

Upon learning of the investigation, Jaindl’s legal counsel sent a letter to Hsiung stating that Direct Action members were guilty of “ecoterrorism” and a range of other offenses. “This criminal activity fostered by your organization is reprehensible, and cannot be overlooked,” attorney Joseph A. Zator II wrote.

Hsiung says he’s unmoved. “It shows you the absurdity of the system that they are trying to say that taking an injured animal to the vet, an animal that they have tortured, is an act of ecoterrorism.”

“If we see an injured animal,” he said, “we try and help him out if we can. This is what all good, decent people do. The notion that it should be criminalized is a wonderful example of the bizarre world that animal agriculture has created for us.”

Correction: An earlier version of this story stated that Jaindl Farms also supplies the Kroger grocery chain. It does not.

The Turkey Farm That Supplies The White House Says It's Humane. See For Yourself.
Jaindl Farm 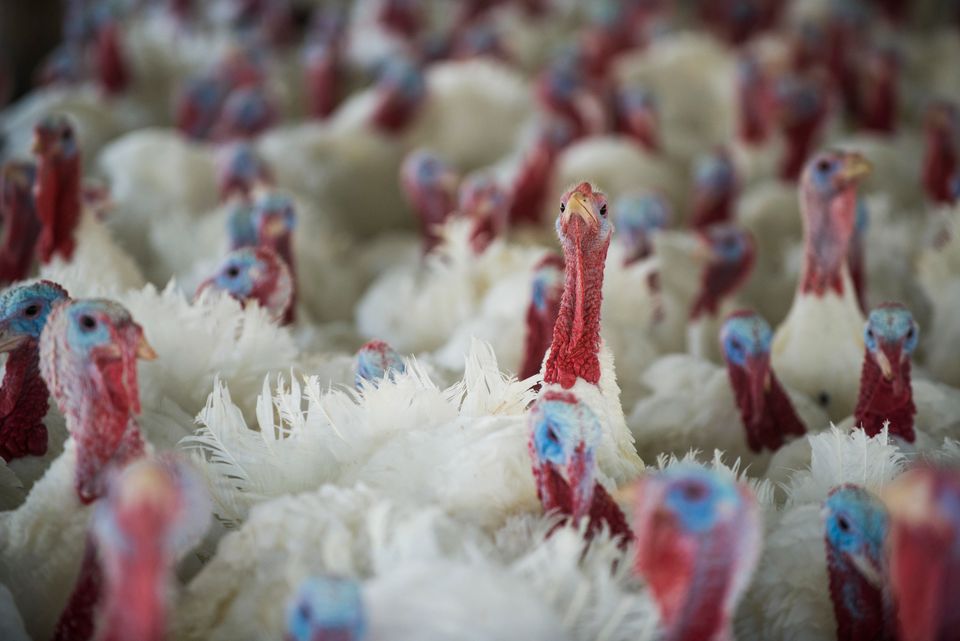