It's a nightmare, packing for the Jaipur Literature Festival: five frenetic days that kick off next week, from January 20 - 24, on the edge of Rajasthan's Thar desert, which means it's hot and dusty while the sun is up, then cold and clear at night. Think L.A. weather, but with a sub-continental ambience: no sports cars or freeways, but heavy on the auto-rickshaws and camels. No micro-minis and bandeau tops, but cotton trousers and fitted kurtas. Thankfully, there are more turbans than baseball caps and, this being the throbbing core for India's gem-cutting industry, evening accessories can be off-the-charts dazzling. Packing tip: borrow someone's vintage Cartier diamonds, pronto. 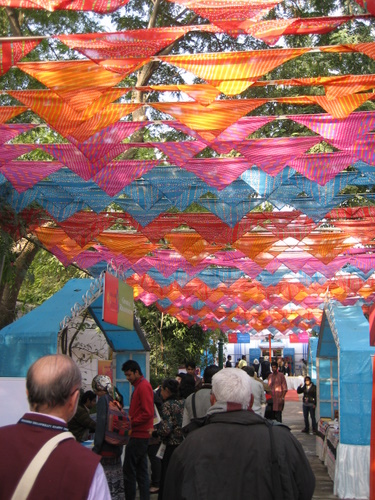 This year is, depending on which tree ring you favor, either the fifth or seventh incarnation of what has become the largest book-fest in Asia, an astonishing extravaganza that is the most unconventional event of its kind. Anywhere. Free and open to all, last year's attendance topped 60,000, the audience an insanely democratic mix of jet-setters and cab drivers, students and publishers, Bollywood superstars, international fashionistas, British peers, and any random tourists who happen to be visiting Jaipur and become ensnared in the Lit Fest's overpowering wake. To describe it as the rambunctious love-spawn of the mercantile-minded Frankfurt Book Fair and free-spirited Woodstock barely scratches the surface of this spectacle: it's an all-encompassing sensory vortex of incense and Mughal tents, live music and colorful banners, sweaty crowds by day and gyrating dancers by night, with the attendant notes of gasoline, burning dung, incessant honking, and tinkling bangle-bracelets that permeate life everywhere in India. It is utterly and completely marvelous.

Festival time in the so-called Pink City can mean hitting the road early, since the first sessions begin at 10 am. Luckily, after a chai at sun-up -- and if your eyes aren't fused shut from fatigue -- there are a number of splendid "heritage walks" offered by the preservation-minded Virasat Foundation to introduce historic areas having nothing remotely to do with books, publishing, autographs, or awards. And Festival nights can go on and on: there are rollicking concerts at Festival Central, namely the Diggi Palace's sprawling grounds where, during daylight hours, book-minded multitudes swarm. Or, if you're lucky, there might be an invitation to a private soiree hosted in one of the exquisite 300-year-old mansions around the city, perhaps attended by some of the elegant Jaipur royals (although probably not the current Maharaja, all of age 13. He's the grandson and adopted heir of Jaipur's last king, who died in April, and the newly minted Maharaja has set off a family firestorm of lawsuits and recriminations). Another night-time possibility? Dine from embossed silver plates in a sky-high restaurant perched atop the Amber Fort, with all of Jaipur splayed out beneath you. But the most likely scenario is that you'll retire to your hotel to rest up for the next day's arduous festivities, taking time to wash the desert dust off your shoes. Packing tip: jettison the stilettos.

And then there are the speakers, a kaleidoscopic -- if somewhat fluid -- roster of some 200 Indian and international authors, playwrights, journalists, actors, artists, and (this year), talk-show-hosts that seems to evolve until nearly the very last second. For instance, in the past few weeks, Umberto Eco and Nicole Krauss mysteriously disappeared from the schedule, while Salman Rushdie and Oprah Winfrey spectacularly materialized, the very presence of these two luminaries ensuring that what is already the Mother of All Wingdings has just catapulted into the celebrity stratosphere. Crowd control not being a priority in years past, seating in the overflowing sessions is at a premium, and the prospect of a literature-inflected stampede isn't out of the question. Packing tip: bring a sharp-tipped parasol, and folding stool.

My own calendar is marked with too many readings, panels, and interviews for a single, un-cloned person to attend: Annie Proulx, Kunal Basu, Tom Stoppard, Michael Ondaatje, Lionel Shriver, Chetan Bhagat, David Hare, and a dozen others have caught my eye, including Oprah if at all possible, because she is so removed from her customary zip code and can have no idea what awaits her. And I'll try to elbow my way into any session featuring William Dalrymple Lit Fest co-director, impresario, and author of such award-winning best-sellers as City of Djinns and White Mughals. I'm an avowed Dalrymple fan-girl.

Too bad Jaipur's visionary founder, Maharaja Sawai Jai Singh II, isn't around to witness all the hoopla. This culture-and-design-besotted Rajput laid the cornerstone of his capital in 1727, determined to create India's first planned city based on orderly blocks and boulevards, unlike any other metropolis in the country at the time. Jaipur became an instant tourist-magnet, its draw only increasing over the centuries, with the Literature Festival as its crescendo.

Of course, there are endlessly beguiling pleasures to explore outside the Diggi Palace confines, like wandering the city's neighborhoods, bazaars, palaces and temples, not to mention the fabulously surreal Jantar Mantar, a collection of outdoor astronomical devices constructed by the scientifically astute Maharaja that call to mind an alien child's playground. And then there are visits to the contemporary fashion designers, painters, block-printers, jewelers, and other artisans for whom Jaipur has become an important nexus. But finally, for absolute serenity after days of raucous throngs and high-falutin' chatter, there's Jaipur's latest jaw-dropping showpiece: the breath-taking, 18th-century Jal Mahal pleasure palace, on view after five years of intensive restoration, replete with carved marble, shimmering frescoes, and a jasmine-scented garden. Hand-carved boats glide visitors across the surface of Lake Mansagar, where the Palace seems to float like an apparition. 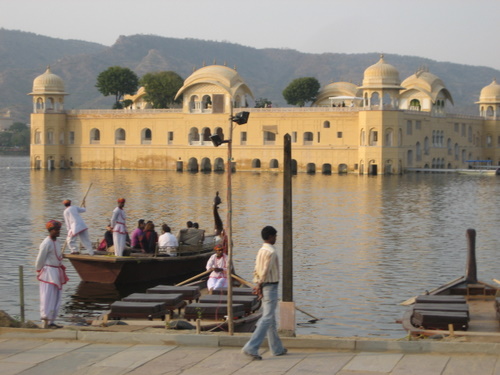 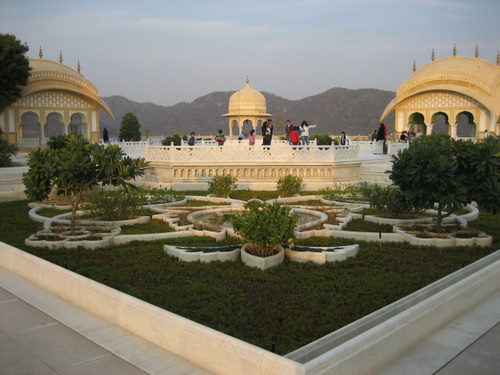 Packing tip: bring enough clothing so that you can stay forever.