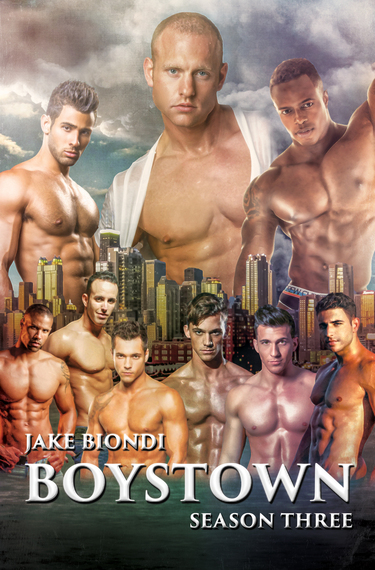 The wait for 'BOYSTOWN' fans is finally over!

"The wait is finally over," Biondi told fans of his 'BOYSTOWN' book series. The third book in the popular 'BOYSTOWN' series was released on May 1, 2015.

"Due to the success of the first two books in the series, fans from all over the country have been dying to know when the third book would be released. Well, their wait is finally over. Today is the day." Biondi added, "'BOYSTOWN' fans are the best. Today is really all about them. I am so excited that fans will finally be able to know what the future holds for their favorite characters and couples."

Biondi promises that readers won't be disappointed. "'Season Three' picks up with the aftermath of the New Year's Eve explosion. While I won't reveal who lives and who dies, I will say this: lives will be forever changed." Biondi added that 'BOYSTOWN Season Three' continues the storylines from the first two books while introducing new ones -- and some hot new characters, too!

As in his second book, Biondi pays tribute to and features some of his favorite performers in 'BOYSTOWN Season Three.' The "Whiskey & Cherries" trio, singer Amy Armstrong, and pop sensation Steve Grand are all featured in the third 'BOYSTOWN' book.

"Meredith, Danielle, and I are thrilled to again be written into the 'BOYSTOWN' series. As an avid fan of our musical trio Whiskey & Cherries, Jake Biondi has included us as the musical entertainment for the fundraiser at the end of the book. As in book two, it's always exciting to read about yourself interacting with the primary characters and being a part of the never-ending twists and turns in the brilliant plot line," said Brian Felder of W&C.

Amy Armstrong added, "I'm so excited that I got to be a part of this outstanding series."

The 'BOYSTOWN' series has a fascinating history. It began as an online story released in installments, each ending with a cliffhanger that left readers wondering what would happen to their favorite characters. Enthusiastic 'BOYSTOWN' fans from all over the world petitioned Biondi to release the installments more quickly; they simply couldn't wait to find out what happened next. Overwhelmed by and grateful for the fans' responses to the series, Biondi began to write more quickly.

In 2013, Biondi published the first ten 'episodes' in book form as 'BOYSTOWN Season One.' The sequel, 'BOYSTOWN Season Two,' was released in July of 2014. Ending in a spectacular cliffhanger, 'Season Two' left the lives of several main characters in peril. Readers were left wondering who would survive and what would happen next. Now, 'BOYSTOWN Season Three' answers readers' questions and, of course, provides even more twists and turns for the fans.

Early reviews of 'BOYSTOWN Season Three' are very positive. Journalist and 'BOYSTOWN' fan Dustin Shrader, who previewed the book, said, "Iconic writer Jake Biondi has done it again. 'BOYSTOWN Season Three' is an emotional roller coaster with page after page of twisting thrills and crafty curveballs coming along at such speed that readers are left breathless. They will not want to get off this ride."

Editor and 'BOYSTOWN' fan Lisa Tepper said, "This story is amazing; it's filled with excitement, drama, romance...you name it, it has it."

Biondi sponsored a nationwide search for models whose images would be used in promotions for the 'BOYSTOWN' series. These handsome men have come to be known by fans and readers as the 'BOYSTOWN Boys.' BOYSTOWN'S Director of Art, Design & Advertising Michael Vargas designed the fantastic book cover for 'BOYSTOWN Season Three.' The cover of the new book features several of these famous 'BOYSTOWN Boys.'

Like the first two books, 'BOYSTOWN Season Three' is available at bookstores across the country as well at online at amazon.com, bn.com, and itunes. The series is available in paperback and all e-book formats. Readers may also order autographed paperback copies of the books directly from Biondi's website: www.JakeBiondi.com