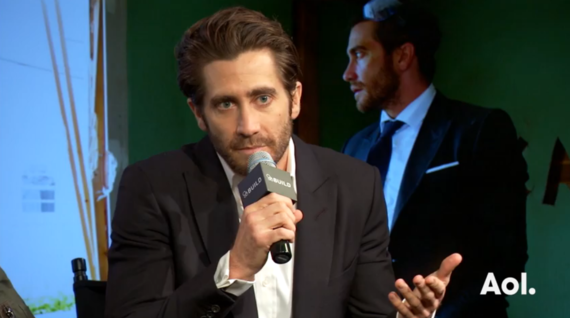 Generally, suitable words cease to exist in the midst of a tragedy. While the horrific terrorism in Brussels is no exception to this, actor Jake Gyllenhaal managed to express a heartfelt sentiment while on the press tour for his new film.

A mere hours after news of the repulsive acts broke, Gyllenhaal and his Demolition costars were set to partake in a live interview on AOL BUILD. The Academy Award nominee looked visibly upset as he took to the stage with the rest of the cast. Once the interview began, Gyllenhaal politely paused from answering the moderator's first question regarding the film. He felt it was more important to address the fresh wounds that terrorists had cut in the world.

"In the spirit of compassion, I feel like I'd be remiss if I didn't acknowledge all the people in Brussels today who are victims of the horrific bombing that happened there," he said gazing at the audience. "We're all having fun here now and talking about a movie we deeply love, but at the same time it's important that we express our support. So, I wanted to say that, first and foremost, before we get into everything..."

When the interviewer asked if hearing terrible news makes it feel different to go out and promote a film, Gyllenhaal responded eloquently:

"I had the honor of meeting President Obama many years ago and he said to me very clearly -- it is your job as entertainers to provide entertainment and, given the tough times that we all live in, to create art that says something, but also really brings people joy. So, I consider that to be my initiative. I think we all do here. It's very important that we stay positive and always create things that are saying something, but also entertaining."

Looping back to the question he said, "it is weird and feels a little funny, but it's important for things to go on."

The other talent on stage (which included Naomi Watts, Judah Lewis and Chris Cooper) firmly nodded in agreement and applauded, along with the studio audience, as Gyllenhaal finished his statement. He appeared to not only extend support to Brussels, but to urge everyone (artist or not) to do what they can to go on with their lives in a positive manner.

You can watch the full interview on AOL BUILD. Our prays are with those affected by the Brussels attacks.