Jamaica Kincaid is simply not one to mince words.

When she speaks, the revered 65-year-old Antiguan-American novelist does so deliberately -- and she's not afraid to interrupt a question when she sees it fit.

Kincaid, who got her start at the New Yorker during the magazine's William Shawn era in the '70s, has produced work that has earned her an enviable list of awards, including an American Book Award for her latest novel, 2013's See Now Then.

One gets the impression Kincaid is afraid of nothing -- something that comes across in her writing, as well. Her work, at times, has been criticized for being "angry," a criticism she's rightfully dismissed as invalid, saying her work is only labeled that because she is black and a woman.

Based on an interview with The Huffington Post, here are just some of the many qualities that make Kincaid -- and her work -- so incredible.

She doesn't like taking life too seriously.
"I've never thought of myself as having a profession because then I'd have to take life really seriously," she said. "I hate taking life seriously, because there's time enough for seriousness. What is death if not serious, and that seems to last forever."

She saves her nice side for students.
When Henry Louis Gates Jr. asked Kincaid to teach at Harvard, where she's taught since 1992, she said had "never really thought of doing it before" and didn't feel particularly drawn to it.

She has no need for Twitter, Facebook or any other social media.
"I plan to never know how to use these things. Life is too short."

She can always get down with a good ol' literary classic.
Kincaid said Herman Melville's Moby-Dick is the last book she read. "I read every sentence twice because I couldn't believe how beautiful it was," she said. "I read it when I was young, but it's still so fresh and wonderful. I still like books with pages." 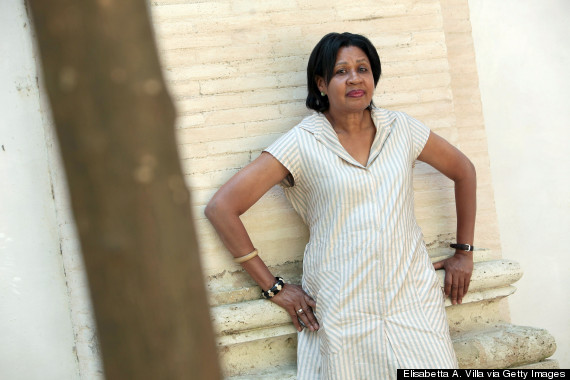 She doesn't appreciate being pigeonholed -- and will let you know it.
When asked what about her writing is most frequently misunderstood, Kincaid said she's grown tired of her work being viewed through the prism of race, something she has little interest in. "I'm almost never thinking of race in particular since I have no real respect for race and don't particularly understand it or care about it," she said.

Still, she doesn't hesitate to speak frankly about race in America.
When asked about the New York Times' controversy concerning TV writer and producer Shonda Rhimes being depicted as an "angry black woman," as well as the protests in Ferguson, Missouri, Kincaid called present-day racism mystifying.

"I think when we look at black people, we just lose our senses. We still can't believe we're here, that they're here. There are black people in America and, God, they're kind of smart! It's still a surprise," she said. "It's like everyone lived in a dream when they were voting for Obama. Who did they think they were voting for? He's a black guy!"

She's more than OK with changing her mind.
Kincaid resigned from the New Yorker, where her career took wind, in 1996 due, in part, to the magazine becoming more celebrity-oriented. But she says has absolutely no problem with Hollywood A-Listers like Tom Hanks writing in the magazine today.

"It's possible that Tom Hanks is a great writer. There's a possibility that we all will be great writers," she said.

And though Kincaid has previously been critical of civil rights leaders like the Rev. Jesse Jackson, she says now "nothing about Jesse Jackson frustrates me. I leave Jesse Jackson alone. I wish we had more Jesse Jacksons and Al Sharptons and less of that idiot Rick Scott from North Carolina or wherever, or Ben Carson."

In her opinion, there is such a thing as a dumb question.
Kincaid also said she's grown weary about being asked the specific degree to which her semi-autobiographical fiction is autobiographical.

"We live in a world in which everyone is very interested in your private life and I don't really have a private life," she said. "But I suppose I object to the idea that I can't reflect on something without it being my life as a scandal, as opposed to my life as a thinking person. The questions about whether [my work] is autobiographical are annoying for sure."

She's got a searing sense of humor.
When asked about what she's working on, Kincaid said: "Oh the usual: a book with very long sentences, and only two or three people on the face of Earth who speak English will like it."

Jamaica Kincaid will appear at Cahn Auditorium in Evanston as part of the Chicago Humanities Festival on Oct. 25.

Reader&#039;s Choice: 20 Books That Every African-American Should Read