UPDATE: Here are all the winners:

Northeast
Tim Cushman of O Ya in Boston

South
Chris Hastings of Hot and Hot Fish Club in Birmingham, Ala.

The annual James Beard Awards, happening Monday night at Avery Fisher Hall at Lincoln Center in New York, are one of the biggest events in the food world. Little else brings together as many chefs from across the country. Alton Brown, the co-host of this year's awards, actually lit the Empire State Building in honor of the festivities.

Monday night's James Beard Awards will honor established and rising chefs from across the country, outstanding wine programs, restaurateurs, individual restaurants and more (see the full list of 2012 nominees). On Friday night, the nominees for the broadcast, book and journalism awards gathered for a separate awards ceremony. Check out the winners for those honors here.

Like any major award show, the James Beard Awards are not without its detractors (see here and here), but the medal still remains one of the few recognized -- and coveted -- accolades granted to chefs and other food professionals across America.

HuffPost Food is on hand at the awards to fill you in on the evening's winners, attendees and festivities. If you want to follow along, check out the liveblog below, watch the awards live if you'd like, and be sure to follow the hashtag #jbfa on Twitter (and follow us @huffpostfood).

Check out some photos (courtesy of Tina Wong) of the night:

Check out our liveblog below.

"I wish there was an award for outstanding wife," said Humm.

Boulevard in San Francisco won the much-coveted Outstanding Restaurant award. Chef Nancy Oakes, perhaps sensing the crowd was getting restless, had one of the shortest acceptance speech of the night!

"Any award you win from the Beard Foundation is bound to be memorable," said Thomas Keller, before announcing the winner.

"The most exciting thing about the award is the party after," responded Daniel Boulud.

We can hope that Tom Douglas will be partying afterwards, even if he wasn't present at the awards. He is the first restaurateur from Seattle to win this award.

Worth noting: it is in fact spelled "restaurateur" not "restauranteur."

New York's La Grenouille has been around for 50 years -- since 1962 -- and is now the winner of the Outstanding Service award.

Chef Grant Achatz and partner Nick Kokonas' Next Restaurant in Chicago, helmed by executive chef Dave Beran, has won for the Best New Restaurant. Next, which only debuted about a year ago, changes concepts every three months. So far, the restaurant has gone through Paris 1906, Thailand, Childhood and is currently serving an homage to El Bulli.

After a rather long interlude from Wolfgang Puck, the recipient of the Lifetime Achievement Award, Mindy Segal of Mindy's Hot Chocolate in Chicago won the award for Outstanding Pastry Chef. She couldn't be at the awards as she is currently renovating her restaurant.

Alton Brown's wise words for how to snag some food for the Gala post-awards:

Who's Who of Food & Beverage Of America

Chef Rick Bayless announced the new inductees of "Who's Who of Food & Beverage Of America."

If you haven't heard of these people already, now you can catch up! But hopefully you've heard of at least a few of them...

Grant Achatz, of Alinea and Next

For Outstanding Restaurant Graphics, Pandiscio Co won for The The Americano at Hôtel Americano, also located in New York.

I wonder if there are more people Tweeting from the James Beard awards than there are people reading the Tweets. 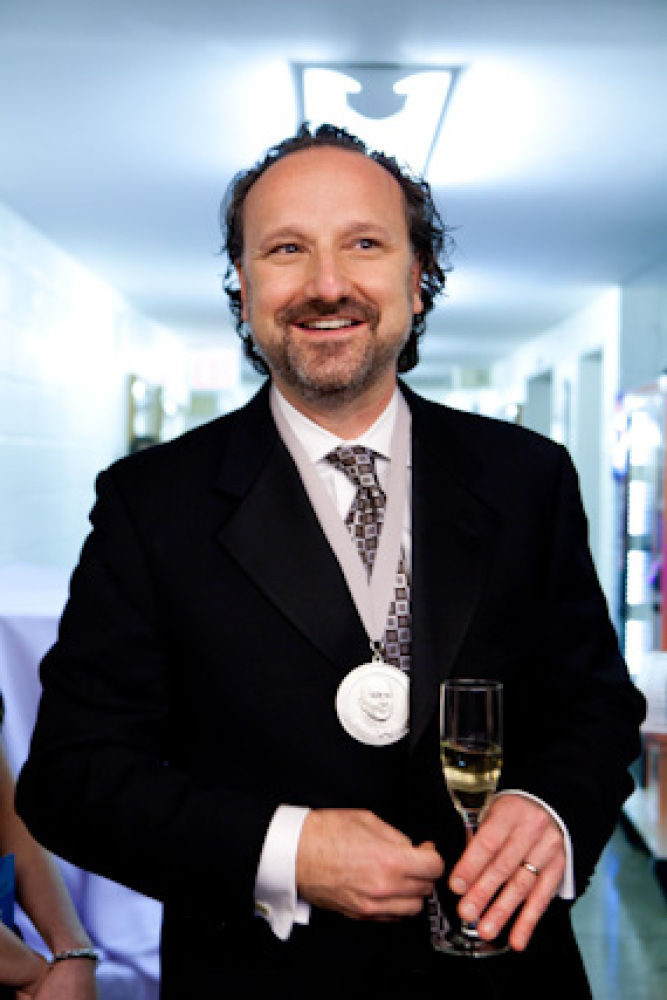