MEXICO CITY -- The news went viral on social networks, while the main print and electronic media trumpeted it on front pages and in prime time as a brilliant coup for bolstering Mexico's international image: James Bond, the super-macho, all-terrain star of the spy world, had descended on Mexico City for two weeks in the midst of staged Day of the Dead festivities.

The government hailed the filming of the opening sequence of "Spectre," which is primed to be the 26th Bond blockbuster, on locations in and around the Zocalo, the historical center of Aztec Tenochtitlan, in colonial Mexico City and the present-day capital. The set is a quick skip from the Great Temple, where, in pre-Hispanic times, high priests gouged out the hearts of victims stretched over a sacrificial stone and displayed the severed heads of war captives on a massive wooden skull rack that resembled an abacus.

The government of Mexico desperately seeks good publicity these days. The lengths it is willing to go for that were revealed by the website Tax Analysts in March, drawing on internal Sony documents hacked and made public by an unidentified organization possibly linked to the North Korean government: Mexican businessmen and officials offered Sony and MGM millions of dollars in in financial incentives and possible tax rebates to portray the country in a favorable light.

Among "elements needed to preserve the Mexican deal" listed in the leaked memo was the inclusion of a recognizable Mexican actress. Stephanie Sigman, star of "Miss Bala," a 2011 thriller about an aspiring beauty queen kidnapped by drug traffickers who is forced to work as a mule, was cast in a small part.

The irony of casting an actress whose image is so tied to the ongoing Mexican tragedy may be lost on international audiences, but not on Mexicans. According to a UN report, 63 percent of women in Mexico have suffered violence at the hands of men. Femicides are on the rise with six women murdered every day, according to the National Citizen Femicide Observatory. Among Latin American nations, Mexico leads in the number of disappeared women forced into sexual slavery.

The government's requirement to film at least four minutes of the film in Mexico City was satisfied by the opening scene, with Bond "taking off into the Mexican skyline" in a helicopter. The portrayal of Mexican police was to be favorable, according to the hacked documents -- the opposite of the reality exposed by President Enrique Peña Nieto himself when he called for disbanding police forces possibly infiltrated by organized crime in 1,800 municipalities throughout Mexico, beginning in Guerrero, Jalisco, Michoacán and Tamaulipas, states that lead the country in extreme violence.

Why should projecting a distorted and unrealistic image of Mexico in a Bond film matter so much to officials in a country where everyone knows the reality: that this is a country where 43 rural teacher's college students disappeared half a year ago, into a vast archipelago of the dead, where myriad clandestine graves yield remains that are never identified?

Since taking office in December 2012, one of President Enrique Peña Nieto's stated aims has been to reposition the image of Mexico abroad, which has been sullied by years of drug war violence that has left more than 100,000 dead and nearly 26,000 missing since 2006. He aims to boost international tourism, a goal that has become more urgent with the fall of oil prices by nearly half since last June, which cut revenue and jeopardized foreign investment in the country's oil industry.

The incentive package for the Bond film is believed to be as high as $20 million. This was obviously considered a fair amount for product placement of "Brand Mexico" in a movie that may be seen by billions. "Spectre" will be released worldwide Nov. 6, days after genuine Day of the Dead ceremonies in Mexico.

While bogus Bond violence was being filmed, thousands marched in Mexico City on the six month anniversary of the students' disappearance in Guerrero. Some of the families have been touring the United States to garner support for demands for justice and to emphasize their rejection of the government's official story, which is largely based on an unverifiable match of one tiny bony fragment to one missing student's DNA. 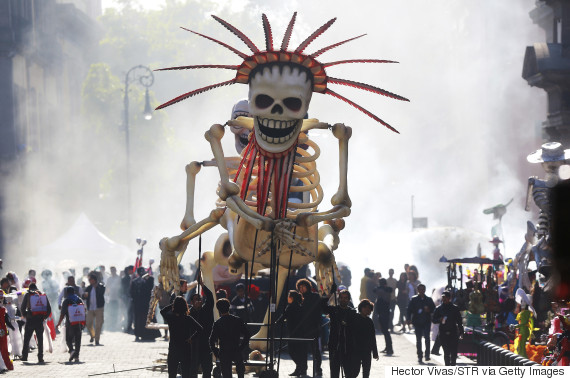 Mexico is not a failed state, but several of the country's 31 states are failed. Guerrero, with the highest homicide rate in the country, is the epicenter of institutional collapse where a dangerous mix of drug trafficking and poverty is larded with pervasive official corruption. In the village of Nuevo Balsas, in the rugged Guerrero mountains, marijuana and opium poppies used to be the main source of income. Since the Canadian company Torex opened the Media Luna gold mine a few years ago, there have been jobs but worse trouble. Kidnappings and extortion have increased, and security is in the hands of community police. As a lawyer in the town of 1,500 residents said, "There's more money and we're a blank check for the mafias. If you don't pay up, they kill you."

Since the media have begun to reflect the rising popular anger over corruption, violence and impunity, they too are at risk and freedom of the press is deteriorating. Among the latest irritants is the firing of Carmen Aristegui, Mexico's most popular broadcast journalist, who last November broke the story of "The White House," a sprawling mansion in the capital's most exclusive neighborhood built for the president's wife, former soap opera star Angelica Rivera, by a company that has received juicy contracts from the government. It is widely believed that she lost her job at the behest of the presidency.

While prestigious journalists are usually protected by their high visibility, the human rights organization Article 19 has documented 656 attacks against journalists since Peña Nieto took office, including more than half a dozen unsolved murders in 2014. On Reporters Without Borders' 2014 World Press Freedom Index, Mexico is 152 out of 180 countries, between the Democratic Republic of the Congo and Iraq.

The latest blow to "Brand Mexico" is a scathing United Nations report accusing police and security forces of practicing widespread torture. "Police and soldiers have regularly turned to torture to punish or extract false confessions or information from detainees in its so-called War on Drugs," the report says. "Frequently, victims are forced to sign declarations under torture and in many cases are convicted solely on the basis of those statements." 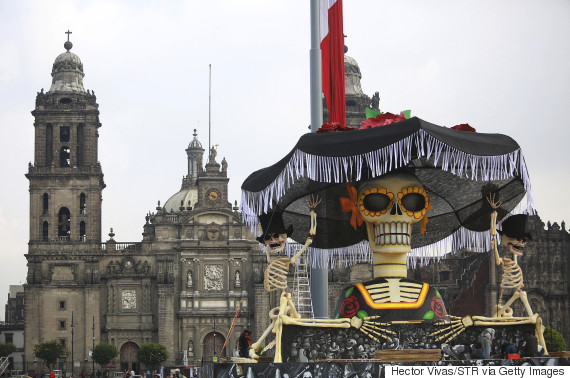 Two recent presidential appointments are also troubling the public. Mexico's new attorney general, Arely Gomez, is the sister of a top official at Televisa, Latin America's largest media company and a key factor in Peña Nieto's electoral triumph. Gomez replaces Jesus Murillo Karam, whose credibility plummeted after he declared "Enough, I'm tired," abruptly ending the Nov. 7 news conference where he had just given the official version of what happened to the 43 missing students: how they had been handed over by police to members of a drug gang, who incinerated their bodies at a garbage dump, pulverized the remains, packed them in plastic bags and threw them in a nearby river. On Jan. 27, Murillo Karam stated categorically that this is the "historical truth." After taking office, Gomez was quick to give her position on the affair of the missing students, calling it an "isolated case."

In yet another bad sign, Eduardo Medina Mora, the former Mexican ambassador to the United States and previously to the United Kingdom, following his tenure as attorney general under President Felipe Calderon, has now taken office for 15 years as a supreme court justice, despite never having served as a judge. As attorney general he midwifed Calderon's disastrous and tragic "War on Drugs." He is widely suspected of having authorized Operation Fast and Furious, a failed program run by the U.S. Bureau of Alcohol, Tobacco, Firearms and Explosives that enabled Mexican drug cartels to get their hands on high-powered weapons, although he denies any involvement. As secretary of public safety under President Vicente Fox, his responsibility for human rights violations during operations by federal police in the repression of residents of Atenco, in the state of Mexico (governed at the time by Peña Nieto) -- whose protest against a new Mexico City airport left two dead and a number of women accusing the police of sexual abuse -- has repeatedly been called into question.

The hope these days is that Mexicans fed up with corruption and impunity will not accommodate political business as usual. Midterm elections will be held in Mexico on June 7 for nine governors, all 500 seats in the lower house of the national legislature and other influential positions. Throughout Mexico, but especially in Guerrero, there are calls for boycotting the elections.

So while James Bond is cavorting in downtown Mexico City among giant skeleton props, leaping over rooftops and jumping into helicopters in an fictional exercise the government hopes will bolster "Brand Mexico," Mexicans all over the country are clamoring for a new deal and real justice.