SAN FRANCISCO — The deepest place on the planet may also hold the clues to the origin of life on Earth.

The discovery of microbial mats — bizarre-looking, filamentlike clumps of microorganisms — living off chemicals from altered rocks 35,803 feet (10,912 meters) beneath the surface of the Pacific Ocean comes from samples and video collected by an unmanned lander, part of movie director James Cameron's mission to the bottom of the Mariana Trench. Researchers have speculated that a similar setup may have sparked the chemical steps that lead to life on Earth, and possibly elsewhere in the solar system.

"We do think that this chemistry could be the roots for metabolism," said Kevin Hand, an astrobiologist at the Jet Propulsion Laboratory (JPL) in Pasadena, Calif. "It could be the driving engine that leads to the emergence of life," he said. "Perhaps not just here, but also on worlds like Europa," an icy moon of Jupiter.

Cameron's Deepsea Challenger expedition made dives to the New Britain Trench and the Mariana Trench in the southwestern Pacific Ocean between Jan. 31 and April 3, with one manned dive to Mariana's Challenger Deep, the dark, flat pool that scientists now know houses a surprising array of life. A peek at results from the expedition were presented to a packed audience here Tuesday (Dec. 4) at the annual meeting of the American Geophysical Union.

The filmmaker journeyed inside a steel sphere encased in foam — dubbed the Deepsea Challenger — built to withstand the crushing pressures below the ocean's surface. The expedition traveled with two unmanned seafloor "landers" — large contraptions hoisted over the side of a ship and dropped to the seafloor. Once on the bottom, bait attached to the lander lured seafloor creatures to the craft, and a suite of instruments took samples, photographs and data.[Images: James Cameron's Historic Deep-Sea Dive]

When he emerged, Cameron told reporters the view was "bleak" and "looked like the moon." But scientists who examined data collected during the deep dives, both manned and unmanned, soon discovered there was life in the coldest, darkest sea.

Along with the discovery of thriving deep-sea mats, several new species swam by the expedition's high-definition cameras and into its collection tubes. Scientists are now analyzing bacteria and other organisms brought back to the surface.

Giant, 7-inch-long (17 centimeters) amphipods, a shrimplike crustacean that may scavenge fallen logs in the trench,were trapped at nearly 7 miles (11 kilometers) below the surface in Challenger Deep and hauled back to the ship. Tests reveal the creatures contain compounds that help tissues and proteins function better at high pressure, including scyllo-inositol. The compound is identical to a drug used in clinical trials to break down the amyloid plaques associated with Alzheimer's disease, said Doug Bartlett, a microbiologist at the Scripps Institution of Oceanography at UC San Diego.

Some 20,000 microbes from the trench are being picked over and will undergo genetic analysis, he said. There were also abundant numbers of xenophyophores, a giant amoeba that is among the largest individual cells in existence. 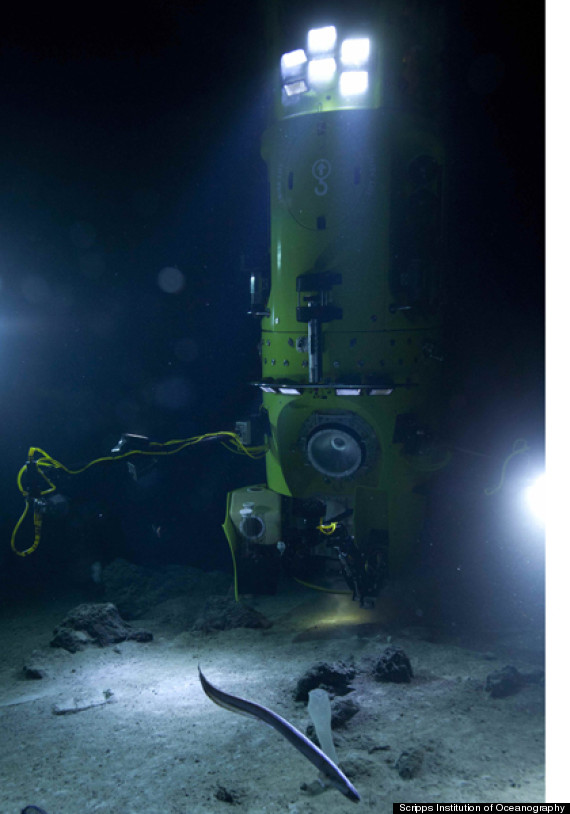 Could you love a worm?

The biggest species of the deep-sea trench was a type of sea cucumber called a holothurian, Bartlett said. "They have been implicated in the past to exist at these depths, but not filmed and reported. We saw one that we think could represent a new species," he said.

The higher elevation walls of New Britain, which extend to a depth of around 12,467 feet (3.8 km) depth, anchored hundreds of acorn worms, a deep- sea invertebrate that leaves distinctive spiral traces of poo on the seafloor. "If you've never thought of loving worms, if you've seen these videos, you would love worms," Bartlett said.

The high-definition video provided close-up images of not only the world's deepest sea life, but also the planet's oldest seafloor. At 180 million years old, rocks at the bottom of the Mariana Trench were molten lava when giant dinosaurs roamed the Earth.

Cameron's imagery from the New Britain Trench, shown at the meeting, may be the deepest pictures ever taken of pillow lavas, formed when lava erupts under water, said marine geologist Patty Fryer of the University of Hawaii in Honolulu. And in the Sirena Trench, where an unmanned lander made a descent to 35,761 feet (10,900 m), researchers unexpectedly discovered outcrops of chemically altered rock called aragonite, lizardite and brucite, said JPL's Hand.

Though the lander's rock sampling arm wasn't functioning properly, Hand later deduced the rock's composition by sieving a few grains of sediment from a water sample brought back to the surface. "It was akin to Mars sample return for me," he said. "Though it's not much, it was plenty to do some great analysis. The analysis was very consistent with seeing those alteration products," he said.

The altered rock is part of the younger tectonic plate overlying the ancient Pacific seafloor, Fryer said. The Mariana trench is a subduction zone, where two of Earth's tectonic plates meet and one slides beneath the other. Water percolating up through the rocks alters the minerals through a process called serpentinization, releasing sulfur, methane and hydrogen, which can feed bacteria — the last, in particular, is "like cotton candy" for microbes, she said.

The outcrop was covered in part by a few meters of thick, filamentlike organic mats. "There was an astonishingly bizarre microbial ecosystem populating these talus blocks," Hand said. "To see this kind of structure, this kind of mat in organized form was quite a surprise."

In recent years, researchers have speculated that early life on Earth arose 4 billion years ago at subduction zones similar to the Mariana Trench. Temperatures were cooler in the deep trenches, and serpentine rocks may have provided the necessary chemical jump-start.

"These deep-sea trenches are places were life might have emerged on Earth," Cameron said. "These mysteries need to be unraveled. Hopefully, we will dive again."

There are no plans for another dive as yet, but Cameron said the submersible and landers are operational and sitting in a barn on his Santa Barbara, Calif., property. "The question is where the funding is going to come from," he said. "I'll have to aggregate funding to do it. I've also got this hobby I do occasionally where I make movies about Pandora." 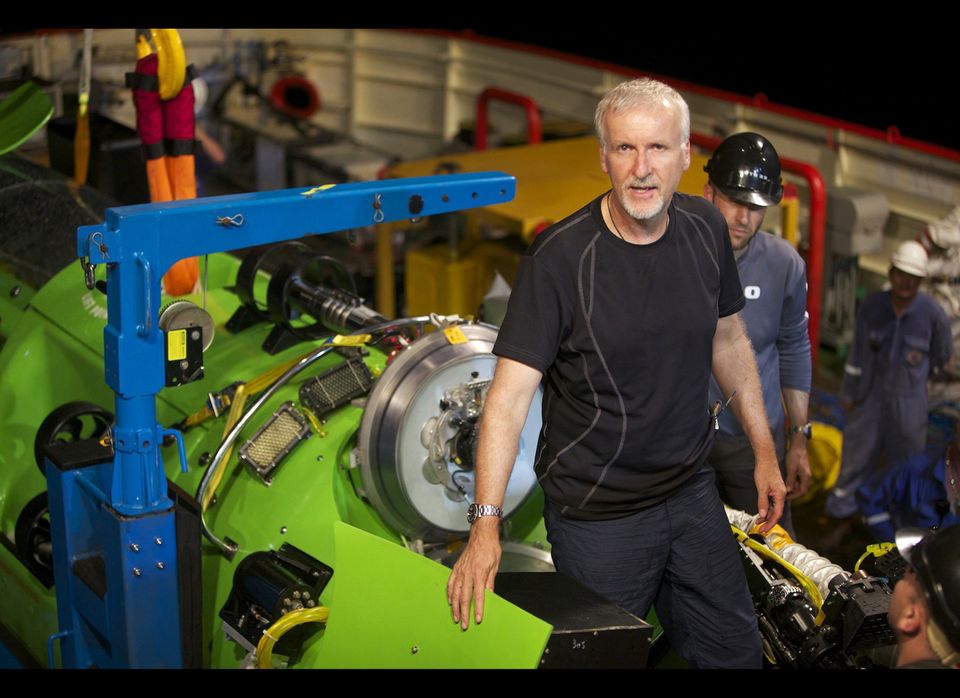