This week has shown yet again what humankind can achieve with commitment,
drive and the passion to explore. In my lifetime I have had the great
honor of meeting men and women who refuse to accept the word 'impossible.'
They are people who dream big and then throw everything thing they have --
blood, sweat, tears (and for many their life savings!) to make those dreams
a reality.

But what drives them -- is it simply the desire to be the first? The desire
to beat their competitors? Sometimes perhaps. On the whole though I believe
the desire is a more altruistic one. To conquer the 'unreachable' parts of
our planet and beyond and bring back those images to show the world. To
share the majesty of worlds previously unknown.

On Monday 26, March 2012, James Cameron dove to the deepest point in our
planet -- a place that only two other men have ever reached. Jim's sub uses a
pressure vessel that is not dissimilar to the original sub that made the
same dive in 1960 using heavy but proven materials, however, he improved
greatly on the exterior design creating an ingenious and rapid express to
the deep. But what is remarkably different is the scientific technology and
importantly, the cameras (aptly!) that Jim and his team were able to fit on
the sub. Jim's desire was not only to do the first ever solo dive to the
bottom of the Mariana but to use modern equipment to bring back those images
for the world to see. As Jim stated yesterday 'he'll be back!' -- he wants
to capture as many images as the new camera technology allows and bring the
secrets of the deep back to the surface for all to see. An incredible goal.

As I mentioned I've had the great honor to meet many inspirational
explorers. Many commentators think we are in competition and never share
ideas or plans. This couldn't be further from the truth!

Over the last few months James and I have discussed working together on the
oceans, these discussions are ongoing and exciting! Virgin Oceanic's Chief
Pilot Chris Welsh has been down in Guam with Jim over the last week. We
share many of the same goals: exploration, scientific discovery and
conservation. We have co-sponsored some of the scientific experiments he has
conducted on the dives this week, and in return Jim is helping us with a
special buoyancy foam that he has developed. Both teams are co-funding a new
sonar that will help us both stay out of the discarded nets that the fishing
industry leaves behind.

We are looking at ways to dive together. Virgin Oceanic's sub has the
ability to cover large distances, at tremendous depth, and discover
interesting sites -- we would act as the seeker \ explorer. Jim's sub has the
capability to move slowly, stop and take samples. They compliment each other
perfectly and in the future will make a great 'sub tag team'! 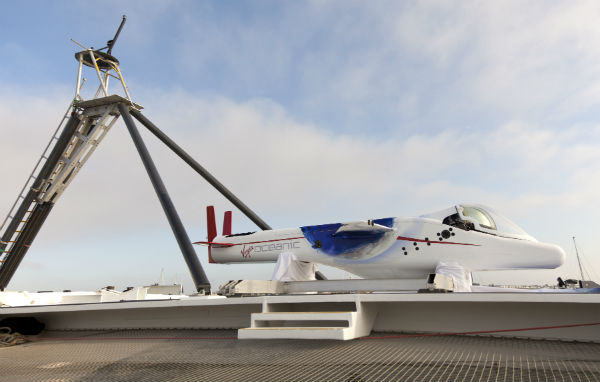 To make the above achievable Virgin Oceanic is attempting to reduce the
weight of our sub to the lowest it can possibly be. Our complete vehicle
will weigh less than one-third of the weight of Jim's sub and will be
capable of exploring much further and faster. Hence, why in the future
Virgin Oceanic would be the 'pathfinder of the deep'!

As a result of the light weight nature of our sub it requires a smaller
vessel and team, we have fitted out a retired sailing cat which will have a
crew of only 10 and is fitted with its own crane. We hope this will reduce
the cost of operation and therefore exploration, to a fraction of what the
current very heavy subs cost to operate. We can then explore more with less,
hopefully making it possible for many more of us to be able to afford to
visit the, so far, undiscovered parts of our Oceans.

This week Jim has shown the world it is possible to take 21st-century camera
technology to the depths -- he has sparked humankind's curiosity to discover
more. We believe many, many more people in the future will want to discover
these worlds for themselves -- we believe Virgin Oceanic's innovative
technology may make that possible.

Virgin Oceanic, from the start of our project, have said that we would like
to conquer all five deepest points in all five oceans. Four of which have
never been explored. That goal has not changed. We will do this by using new
technology that will make exploration less expensive and therefore more
sustainable. But this technology has never been proved before. It is
innovative technology, specifically our much lighter carbon and quartz
pressure vessel. Much like Virgin Galactic and our innovative approach to
space travel, we will need to prove this new technology a step at time.

The first of the unconquered or "virgin" oceans we are setting our sights on
is the Atlantic and the Puerto Rico trench. I have a great affinity with the
Atlantic -- I started my first airline across it and even named it after it!
I have crash-landed balloons on it, raced speedboats and sailboats across it
to set new records, and now live on an island in the middle of it! I think I
owe it to this amazing ocean, one that seems to have been a lucky charm for
me over the last few decades, to be the first person to explore its deepest
point.

Given the unproven technology of Virgin Oceanic we have to test our pressure
vessel and then conduct sea trials before taking the sub deeper and deeper.
This could take time, as safety is crucial when going to the deepest parts of
our planet -- search and rescue isn't an option...

That being said the Atlantic is particularly gorgeous mid-summer!

Congratulations yet again to Jim and his team -- an incredible feat of human
endeavor.

Hopefully with the development of less expensive and sustainable subs such
as Virgin Oceanic -- the oceans are now officially a 'film set' we will,
hopefully, one day all get to explore!