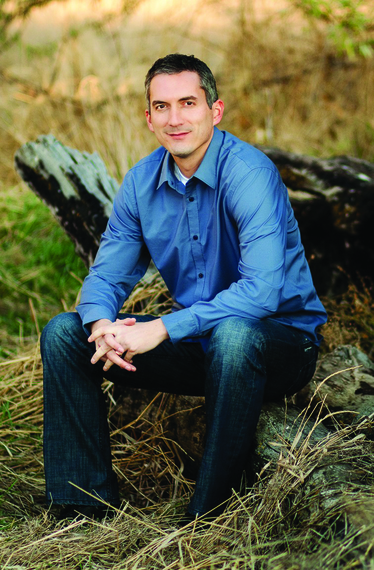 It is no secret that authors create worlds for readers. They shape new worlds, new words and new characters that eventually become our best friends. James Dashner, the #1 New York Times bestselling author of The Maze Runner series, is one of these brilliant minds. Dashner is the author of The Mortality Doctrine series, which takes place in a world of virtual reality, gaming, and hyperadvanced technology.

The highly successful author originally started off as an accountant, working in the field for 7 years. "I've been writing since I was a kid. I wrote a novel in college. I wrote even when I was an accountant. I kept trying to get published and in 2008, I finally got my big break with The Maze Runner, made enough to quit my job, and went full-time," he explains. And while some authors allow their fans' images and ideas to seep into the pages of their books, Dashner prefers that his work remains his own. "My fans don't influence my writing but they definitely influence my job. Without them, I wouldn't be able to do this. This was the reason I wanted to give them something more after The Maze Runner."

Dashner says that he believes his first set of books, The Maze Runner series, came about as a result of experiences throughout his entire life. He was particularly inspired by The Shining. "The ending really influenced it," he says. "The maze and the sun became elements of The Maze Runner. I was also both fascinated and creeped out by mazes in general." Dashner explains that Lord of the Flies, the television show Lost, and the idea of an apocalypse also played significant roles when he was writing his first novel.

Dashner has an interesting technique to writing his books: he imagines them as movies as he writes them. He takes the visuals from these "mental movies" and begins to describe them with words and a novel is born. "Star Wars and Indiana Jones are definitely two film series that influenced my writing," he says, enthusiastically. "There's so much adventure, they were so popular. Lord of the Rings is my favorite movie, though." He also explained that every person he meets contributes to the personalities of his characters. "I definitely leave a piece of every person I meet in the characters I write. A bit of myself goes in, too. I like to think that Thomas [from The Maze Runner] is a braver version of myself." The bestselling author adds that Mad Max (the 1979 dystopian-themed film starring Mel Gibson) and Lost inspired the world of The Maze Runner.

"I can't help but let myself bleed into the characters a little."

However, when comparing The Maze Runner series to Dashner's newest series, The Mortality Doctrine, similarities seem to be nonexistent. "I didn't want to stop writing with just The Maze Runner. I grew up with all kinds of games; I loved the Matrix movies as well. Inception was also a movie I found fascinating, with the concept of layered dreams. I added that idea to virtual reality when writing The Mortality Doctrine."

Dashner explains that the title for The Mortality Doctrine series came from him wanting the series to be a bit mysterious. "I wanted readers to see it and say, 'Oh, what's this?' The main idea behind the series is mortality, too. I found the word 'doctrine' very interesting. There was the Monroe Doctrine and I think I just picked up the word from that. It fit the story." When asked if The Maze Runner inspired The Mortality Doctrine in any way, Dashner explains that it both did and didn't. "Every book I write becomes a part of me. I didn't want The Mortality Doctrine to be the same as The Maze Runner, but there were ideas of my own that fueled both."

In Dashner's new world of virtual reality, a being called a Tangent exists. "I used to tell people it was Pinocchio meets The Matrix," Dashner says with a laugh. "Puppets inspired me, but I didn't want to call the character a 'Puppet'. It wasn't original. 'Tangent' just came to me and I made it a being of artificial intelligence."

The world of The Mortality Doctrine was inspired by movies such as Blade Runner and Back to the Future II.

In terms of future works, the versatile writer says that readers can expect a second prequel to The Maze Runner series that bridges the gap between The Kill Order and The Maze Runner. He also hopes to write a novel that reminds him a bit of Stephen King's work.

"Stephen King is my favorite author. I think my favorite book of his is The Stand. He's a brilliant writer."

His advice to writers? "I found that going to a lot of writers' conferences helped me. They have classes and pitch sessions. I made a lot of friends and connections that way, too."

The third and final installment of The Mortality Doctrine series, The Game of Lives, was released on November 17, 2015.