Like most classic Hollywood dramas, this Oscar story has a happy ending after all.

Following what seemed to be an attack on his hosting performance by longtime Oscar writer Bruce Vilanch, a vengeful James Franco tweeted out a graffiti'd photo mocking Vilanch's career.

The photo can be seen here; the crux of Vilanch's comments is:

"I don't think he realized how big a deal it is to do it until he was actually confronted with it. I think he thought he would kind of ... I don't know what he thought. I thought maybe it was a performance-art prank, and then I realized he sincerely wanted to do it. But it's outside of those guys' comfort zones. The only people who know how to host those shows are people who get up onstage every night and say, 'Good evening, ladies and gentlemen. A funny thing happened ... ' Or people like Bette [Midler] who get up and sing all night and tell stories."

Turns out, Vilanch didn't quite mean what he said maliciously; in a message to Franco, he claimed that he actually defending his host. It reads, in part:

"i was JOKING with this guy on the red carpet about all the sleeping jokes about you. he then got vehement about how bad you were and i was trying to DEFEND you. i don't know what version, what context you read these remarks in, but believe me, i would never diss you. that's not my style."

It was an apology that Franco accepted, and he tweeted a photo of the message and his response, which calls out dumb blogs. Breathe easy: all is right with Hollywood. 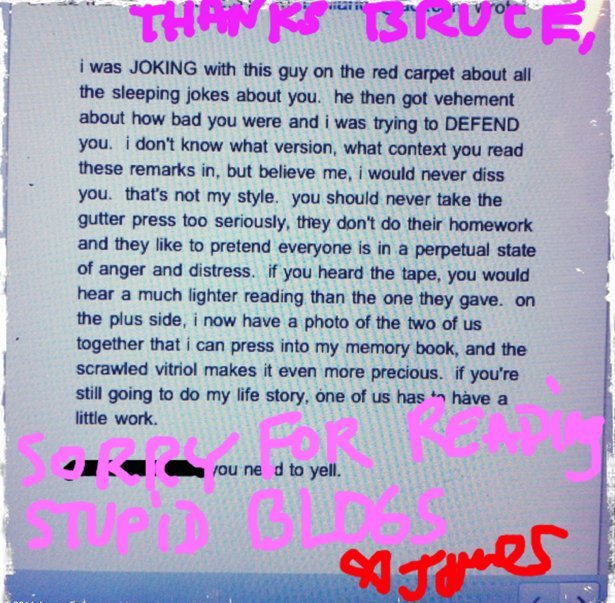