James Franco has taken on plenty of odd projects in his day, but now it appears as though the actor/director/writer/eternal student is making a movie about Lindsay Lohan -- or a "Lindsay Lohan type."

According to a casting notice on Actor's Access, Franco is listed as the director for a new feature film, or "video/art project," which will tell the story of "two Hollywood celebrities."

The casting breakdown is seeking "James Franco types" and "Lindsay Lohan types" at the ages of 13, 21, 30, 45 and 60, and unfortunately, it doesn't state whether or not Franco or Lohan will appear in the film as themselves.

Miles Levy and Vince Jolivette are listed as producers on the project. In 2003 they teamed up with Franco to form Rabbit Bandini Productions, and have a number of anticipated films waiting to be released, including the upcoming Linda Lovelace biopic staring Amanda Seyfried "Lovelace," Harmonie Korine's "Spring Breakers" and "Francophrenia (Or Don't Kill Me, I Know Where the Baby Is)," a mini-thriller comprised of TV footage of Franco's guest-starring appearances on the soap opera, "General Hospital."

Again, the casting notice doesn't say if Lohan will be involved with the film, but the 26-year-old has been trying to make a comeback and has been involved in a number of art projects, including a short film shot by Richard Phillips, and a number of controversial photo shoots with photographer Tyler Shields.

It's possible that Lohan will take part in the film given that she and Franco are, by her own admission, apparently very close. In April 2011, she told the New York Post that and Franco are "like best friends. We're hanging out later." In March of that year it had been reported that the two were teaming up with photographer Terry Richardson to create an "explicit photographic book," which includes "full frontal nudity" and "graphic shots" -- though that project has yet to happen.

Franco and Lohan's friendship reportedly goes way back and the two might have once been more than just friends. The pair worked together in cameo parts in 2006's "The Holiday," and in January 2007 it was reported that Franco may have prompted Lohan to check into Wonderland Rehab Center, after he reportedly ignored her at a post-Golden Globe party and refused an expensive watch she tried to give him as a gift. According to NBC News, Franco was one of several people who received an email from Lohan when she entered rehab. 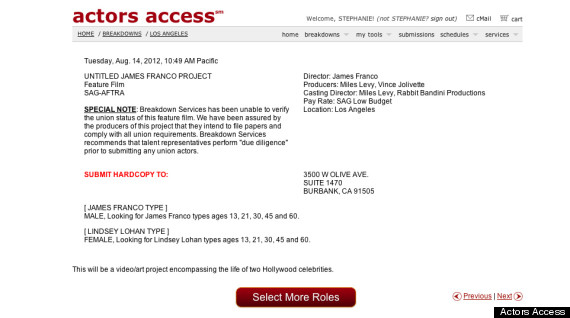