An alleged private conversation between James Franco and a 17-year-old girl visiting New York from Scotland has leaked online, in which the actor appears to try to convince her to meet him at a hotel room.

Photos and screencaps of their alleged conversation were uploaded to Imgur by an unknown source on April 2, but have since been removed from the site.

In their conversation, Franco appears to ask the teen where she's from, if she's single and if she wants to meet up if he gets a hotel room, after being told she's a few days shy of her 18th birthday. Franco and the teenage girl seem to have first crossed paths while the 35-year-old was signing autographs outside the ‎Longacre Theatre, where he's currently performing in "Of Mice and Men." The teen tagged Franco in a photo she shared on Instagram, and it seems they began chatting from there. The girl also posted a video of Franco to her Instagram account, in which he explicitly asks her to tag him in the photo, presumably so they could connect afterward.

During the alleged conversation the teen was doubtful that she was talking to the real James Franco and requested that he write her name on a piece of paper and send her a photo of his face. Franco appears to have complied.

Request for comment from Franco's rep has yet to be returned, however, after the images from the conversation leaked, the actor Instagramed a photo of himself with "WHY ARE YOU SO THIRSTY FOR UNDERAGE ONES," written on it and tweeted, "I'M NOT! I HOPE PARENTS KEEP THEIR TEENS AWAY FROM ME. Thank you." While the Instagram photo has since been deleted, the tweet still remains live on Franco's account. 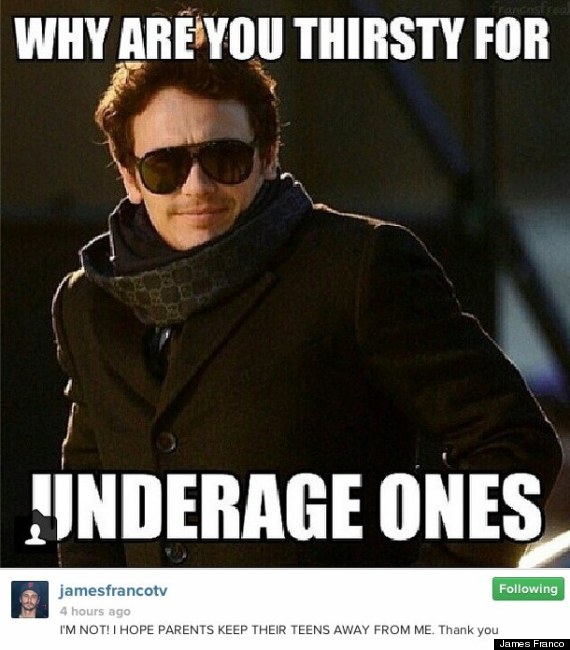 Given Franco's response to the leaked conversation, it's worth noting that this all seems very strange. We can't help but wonder (and hope) if this could be part of an elaborate promotional campaign for Franco's new movie "Palo Alto," based on his own short stories, in which he plays a high school girls' soccer coach who has an affair with one of his teenage players.

To see the entire alleged conversation, check out the slideshow below: