In a story about Hollywood's biggest night, the plot has just gotten a whole lot thicker.

Intimating that Franco was perhaps too busy to fully commit to the job and perfect his performance, Vilanch said:

"I don't think he realized how big a deal it is to do it until he was actually confronted with it. I think he thought he would kind of ... I don't know what he thought. I thought maybe it was a performance-art prank, and then I realized he sincerely wanted to do it. But it's outside of those guys' comfort zones. The only people who know how to host those shows are people who get up onstage every night and say, 'Good evening, ladies and gentlemen. A funny thing happened ... ' Or people like Bette [Midler] who get up and sing all night and tell stories."

In response, Franco posted on Twitter both a message saying, "Bruce, he let me down," and a graffitied photo. He quickly took both the message and photo down, but then, around 8:00 pm ET, put them back online. Whether the two items stay online longterm or not, the odds are that Franco will not be hosting next year's show.

Since reposting the Vilanch tweet, Franco has posted a number of videos, including a clips from documentaries. And a video of his cat. 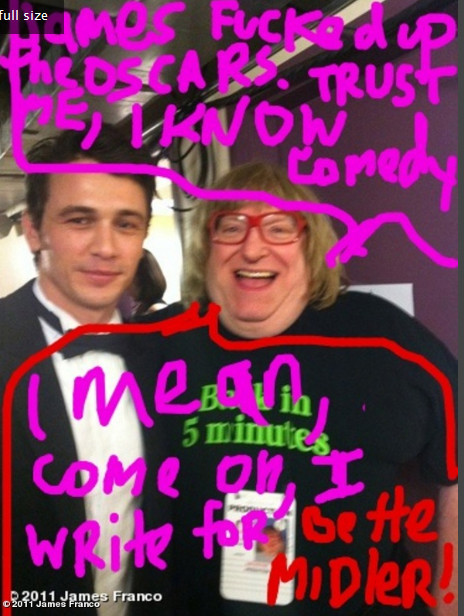