From the premiere episode of The Sopranos forward, I was a huge fan of The Sopranos and the show's amazing lead actor James Gandolfini. What David Chase and team were creating week after week was quite amazing, but what Gandolfini was creating and living moment by moment was the essence of was a timeless work of art and passion that we will not see again for a very long time.

Though I'd worked a long while in film and television, I never dreamed that a tall drink of water from Texas would end up acting alongside Gandolfini in the show that I loved, even when I was invited by the Austin Film Festival to do a panel with David Chase and to honor Chase with their lovely writing award. David and I spent some enjoyable time talking about his hit show and about the past months I'd spent in Italy writing a book about the Calabrian mafia, the Ndrangheta. I'd recently been in La Stampa prison interviewing Ndrangheta hitmen, one of whom told me of taking a target into the woods and ordering him to dig a grave. When the man ran away, the bad guys had cut his achilles tendons, then made him continue digging. "Let's see you run now," they laughed.

A few days later, The Sopranos casting agents called to ask if I'd audition for a part in the show. The scene came over my fax and I read the pages trembling, my eyes pouring over the lines of Aaron Arkaway, Janice's born again, narcoleptic boyfriend. The title of the episode was one of my lines, "Have you heard the good news?"

I shot the audition in Austin, Fedexed the tape and was on the plane to New York to start shooting by the next week. The first day on the set -- with one of the greatest casts and crews ever assembled -- I ran through the first scene with the full cast with the exception of James Gandolfini, who I believe was still in makeup. The Sopranos family was watching football on Thanksgiving Day and I had the easy task of taking a deep narcoleptic nap. I asked the director if it would be okay for me to fall asleep on Tony's shoulder and he said to give it a shot with Gandolfini's stand-in.

Here's the thing. I'd been up all night -- a great way to look sleepy and as it would turn out, one of Gandolfini's own tricks to create a look and feel he wanted -- so when we ran the scene a second time, I didn't actually notice that my head was not resting on a stand-in but on the man himself. Just before "action," Gandolfini leaned down to my drooling face on his shoulder and introduced himself. 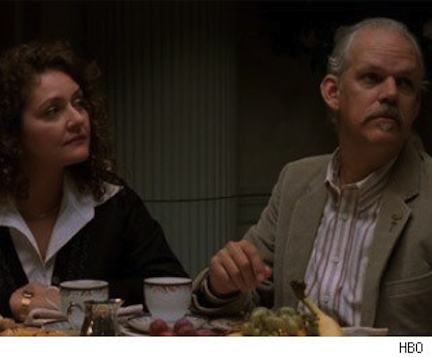 One episode turned into two and then into three. There wasn't a lot of broad comic relief on the show and I was loving being a part of it, especially being in the spell of the great and kind James Gandolfini. Filming the show was a marathon for all involved. Late one night, Gandolfini had a rare break where he wasn't in a scene. When he came back for a post-midnight scene, he brought back enough sushi for the cast and crew to cover a 20' table. Those type of gestures were not uncommon.

When I'd fallen asleep on the dining room table during Thanksgiving dinner, he bounced nuts off my noggin from the other end of the table, and between takes kept saying, "Man, am I throwing those too hard." I said, "Is that all you got?" And it turned out that indeed he had a little more.

Gandolfini was a cigar smoker and between scenes would retire to the back porch of the Soprano family home for a stogie. This is on an indoor soundstage at Silver Cup Studios in Queens mind you, a definite No Smoking zone. I asked him what it takes to get that privilege and he said, "All it takes is asking. And you're the first to ask."

So there I was, looking at the painted swimming pool Chroma Key of the Sopranos family back yard, smoking a Cuban cigar with the greatest actor of my day. Thank you Jimmy, for that and for so much more.

I was just a tiny cog in the great wheel that was The Sopranos, just one of thousands who James Gandolfini treated with kindness and respect. There are few so great who remain so humble, who are able to grasp their own incredible abilities and still recognize them as a gift.

James Gandolfini was a gift. And he will be missed beyond measure. Luckily we have his incredible body of work to keep us company. Thanks Jimmy for showing us the way. And thanks David for letting me lean on the shoulder of greatness.