The man who's been called the Paul Revere of climate change, Dr. James Hansen, launched his new book, "Storms of My Grandchildren," last night at Houston's Wortham Center to a packed house. 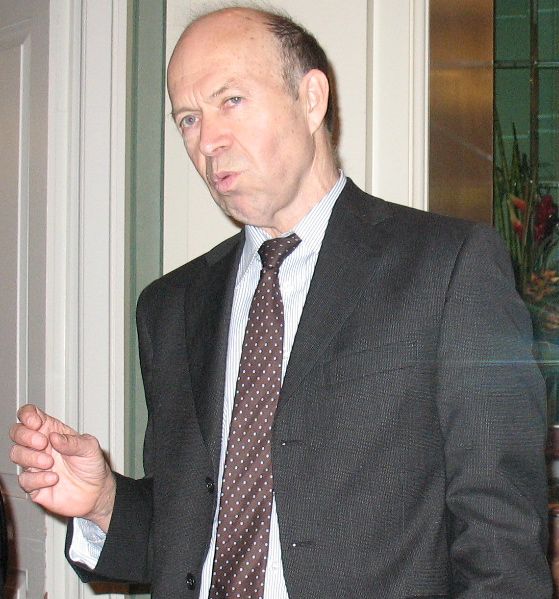 Why would Houston be chosen for this honor, you might ask? It's the No. 1 carbon-emitting city in the nation. Progressive Forum Founder Randall Morton pondered this question out loud as he prepared to introduce the imminent climatologist, and his 13-year-old daughter Eva piped up with a pithy response: "Because we need it more."

Hansen first emerged into the public eye in 1988, when his Congressional testimonies first put the issue of global climate change into public circulation. For awhile he went back to the laboratory and focused on doing science, as he explains it, hoping that other more eloquent spokespeople would take the ball and run with it. Now that the planet is dangerously close to a point of no return, however, he says, his concern for the future of his young grandchildren has spurred him back into the political arena. He's been arrested at a protest against mountaintop removal in West Virginia and joined protests in Washington, D.C., England and New York, among others. His militancy has made him a lightning rod for climate change deniers.

As a crusading young environmental journalist in 1988, I was captivated by Hansen's emergence on the political scene. Already a high-profile climatologist with the NASA Goddard Institute. Hansen's testimonies before Congress that year and the next outlined an unimaginably grim future if we didn't join forces to reduce the greenhouse gases we were spewing into the atmosphere.

It seemed to me at the time, young idealist that I was, that Dr. Hansen's stature and his clear evidence would finally bring our leaders to their senses, and that we would begin to steer our nation's course in the direction of greater sustainability.

Of course, two decades later, things have only gotten worse. In that 20 years, the Arctic ice has begun to melt; droughts, wildfires, storms and floods have become more frequent and more severe; coral reefs have begun to die as the oceans have acidified. People living in low-lying areas like the Maldives and Bangladesh are already seeing the ocean lapping at their doorsteps. The glaciers that feed the rivers that provide drinking water to billions of people are rapidly melting. Inuits in Alaska and Canada are seeing their villages eroded away as the permafrost melts. The vast body of scientific evidence now available confirms the human genesis of this unfolding crisis, despite the so-called "climate gate" that erupted last week over some leaked e-mails from the Anglia Climate Center in England.

And yet Americans list climate change at the very bottom of their list of priorities - far below the ranking of other nations, particularly those who are on the front lines.

I asked Hansen last night why he thought Americans remain so unconcerned. One reason, he said, was La Nina. This cyclical climate pattern led to an unseasonably chilly summer in the Midwest this year. Despite that, the summer of 2009 was the second hottest on record, he said. The problem is that Americans aren't seeing it because it's not happening here.

"It's hard for the public to recognize that we're in an emergency," he said. "What they don't see is that there's more in the pipeline; the ocean is 4 kilometers deep on average, and it hasn't yet responded fully to the changes we've caused."

Hansen's talk, scheduled to coincide with the opening of the United Nations Climate Change Conference in Copenhagen, was an inconvenient truth taken to the next level.

"We are closer to the tipping point than we had realized," he warned, referring to a series of feedbacks that could be unleashed by the melting of the Arctic ice shelves, combined with other factors to produce runaway climate change.

Unfortunately, he said, the actions that global leaders are planning to announce in Copenhagen "will have no significant effect on business as usual... Politicians are saying the right words, but their actions don't follow suit.

Hansen's assessment of the most likely scenario being floated for carbon regulation, cap and trade, was that it's akin to the Catholic Church's selling of indulgences in the Middle Ages, in which sinners could buy forgiveness for their sins.

The idea under cap and trade, he said, is that "you don't really have to reduce your emissions; you can just preserve a forest in Brazil."

The problem with that, Hansen said, is that demand for wood doesn't go away, and so a different forest will be felled to provide the wood.

Hansen's critique of cap and trade is a controversial one, even among progressives. Yesterday's New York Times put the debate into sharp relief, with Hansen's Cap and Fade calling for a carbon tax and citizen dividend, and economist Paul Krugman, normally a fan, delivering Unhelpful Hansen.

Regardless of how it's done, Hansen makes a compelling case that coal should be left in the ground as we begin to power down from an era of cheap fossil fuels.

Asked how he keeps his hope alive after 20 years on the climate trail, Hansen says he's inspired by his grandchildren. He told a story about his 4-year-old grandson, whom he queried about his persistent failed attempts to deliver a basketball into a hoop.

"You have to have a never-give-up fighting spirit," the boy told his grandfather.

"Thank goodness he has that spirit," Hansen reflected with a wry smile. "He's going to need it."

Tracy L. Barnett, www.tracybarnettonline.com, is the founder of The Esperanza Project.