On the first day of a planned two-week sit in at the White House organized by TarSandsAction over 70 people were arrested including one of the lead organizers organizer Bill McKibben. In an attempt to intimidate concerned citizens and policy makers from continuing the sit-in, the National Park Service did not honor its previous agreement with McKibben and others to "catch and release" participants but is holding them in jail over the weekend. Numerous environmental organizations and leading climate scientists have condemned the Keystone XL Pipeline project which would bring 900,000 barrels of dirty oil from the Alberta Tar Sands to Texas refineries. Preeminent climate scientist and director of NASA's Goddard Institute James Hansen has described the Alberta Tar Sands oil extraction development as a game-over proposition for climate change. Sunday afternoon, he addressed the continuing struggle to address the ever increasing threat of anthropogenic climate change. Dr. Hansen will be participating in the protest against the Keystone XL tar sands pipeline in Washington, DC on August 29th with religious leaders.

JC: President Obama had lofty promises regarding climate change and the environment during his campaign. To date, his administration has failed to deliver and is now positioned to approve the Tar Sands Pipeline, the worst idea in many years in terms of its impact on climate. Do you see any signs that the Obama administration is moving to seriously address climate change? Do you feel they administration deserves a second chance?

JH: Are they serious? The tar sands pipeline approval or disapproval will provide the sign of whether the Obama administration is serious about climate change and protecting the future of young people.

Obama's first chance was when he was elected -- he could have made energy independence and climate a top priority. Talking nice about sun and wind and green jobs is just greenwash. The only effective policy would be a rising carbon fee collected from fossil fuel companies with 100 percent of the funds distributed to the public -- stimulating the economy and moving us rapidly toward a clean energy future. Anything less is just blather.

JC: CO2 levels have now exceeded 391 ppm, and US emissions are growing again at a record rate, over 4% this year so far. This in spite of an ever increasing body of scientific evidence that unequivocally demonstrates anthropogenic climate change to be seriously affecting global climate life support systems. It would seem that policy makers and business leaders the world over are incapable of altering the dead-on course to climate collapse. What can be done?

JH: The problem is that the policy makers the world over are paying more attention to the fossil fuel lobbyists than they are to the well being of young people and nature, as my colleagues and I have described in the paper "The Case for Young People and Nature".

Until the public demands otherwise, the policy makers will continue to serve their financiers.

That's the point of the present action -- to draw attention to the inter-generational injustice of current policies -- our children and grandchildren are getting shafted by our well-oiled coal-fired politicians who do not look beyond their next election.

The tar sands verdict will show whether he really intends to move us to clean energy or whether he will instead support going after dirtier and dirtier fuels (tar sands, oil shale, mountaintop removal, long-wall coal mining, hydro-fracking, deep ocean and Arctic exploration, etc.). 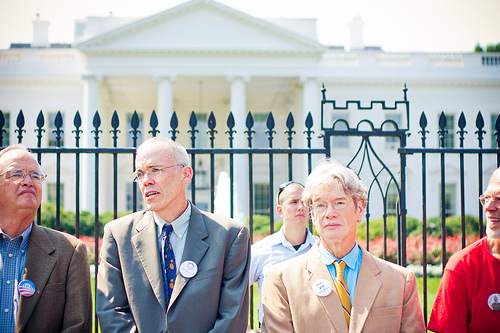 JC: As you know over 70 people including our friends Bill McKibben and Gus Speth were arrested yesterday in front of the White House. As always, Bill and the group had repeated discussions with the authorities prior to the action and were assured that this would be "catch and release". As it turns out the National Park Service changed the terms of engagement and are holding everyone (except DC residents) over the weekend to discourage others from participating in the two weeks of protest. Do you think this change of tactic by the National Park Service will be effective in dissuading others from attending?

JH: No. What we are doing to the future of our children, and the other species on the planet, is a clear moral issue. As Albert Einstein said, "thought without action is a crime." Choosing silence and safety is not an option.

Jail threats did not dissuade Martin Luther King -- and intergenerational justice is a moral issue of comparable magnitude to civil rights.