I imagine that one of the most empowering aspects of being famous is the ability to have your voice heard: to fearlessly and boldly share your thoughts and opinions knowing that people are listening and responding on a national or international level.

While their qualifications to speak on certain topics and issues can at times be questionable, the influence public officials have is truly immeasurable, stirring a debate or movement with a simple act, speech or -- in the case of James Harrison, the linebacker for the Pittsburgh Steelers -- a post on social media.

This past Saturday, the notoriously aggressive professional football player used social media to lambast "participation trophies," writing a paragraph-long post explaining that trophies should be awarded based solely on merit, not for simply trying.

I came home to find out that my boys received two trophies for nothing, participation trophies! While I am very proud of my boys for everything they do and will encourage them till the day I die, these trophies will be given back until they EARN a real trophy. I'm sorry I'm not sorry for believing that everything in life should be earned and I'm not about to raise two boys to be men by making them believe that they are entitled to something just because they tried their best...cause sometimes your best is not enough, and that should drive you to want to do better...not cry and whine until somebody gives you something to shut u up and keep you happy. #harrisonfamilyvalues.

As you might expect, his words elicited a debate and spiked conversations both online and off from those who applaud his sentiment against the "culture of entitlement" and those who were taken aback by the "harshness" and "cruelty" of his message. 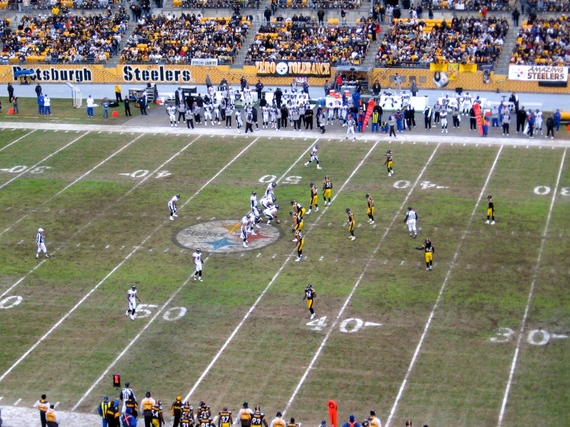 This certainly isn't the first time that Harrison has caused controversy. He made headlines in 2008 when he was arrested on charges of assault and criminal mischief when he allegedly broke down a door his wife was hiding behind during an argument over whether to baptize their son (the charges were dropped when he agreed to undergo anger management and other counseling).

Needless to say, there's a reason Harrison has a reputation for being a fiercely competitive, intense and daring athlete (HBO's Hard Knocks once labeled him "The baddest man in football" and in an ESPN poll, NFL players chose Harrison as "the most violent, dangerous player in the NFL"; his nickname is "Silverback" and his teammates have referred to him as Deebo, from the character in the Friday movies).

There are people who have -- and will -- point to his past imperfections or errors as proof that his "participation trophies" post and message about entitlement should be disregarded. To do so, however, is to cast an unjustly harsh judgment on someone who, like the rest of us, is human and, like the rest of us, has at times faltered.

While no one is required to agree with Harrison's message, the fact that it comes from someone who is living proof that success is earned and achieved through hard work should not be overlooked.

Indeed, his career as a professional athlete was anything but handed to him. Harrison wasn't recruited by Kent State University -- he played as a walk on. And he wasn't even drafted by the NFL (he was labeled "too short" at six feet tall).

The Pittsburgh Steelers signed Harrison as an undrafted free agent in 2002, making him the first Kent State alumnus to play at linebacker for the team since Hall of Famer Jack Lambert. It wasn't until 2007, however, that his career really took off, as he was cut four times by NFL teams before actually appearing in a game. Since then, he has earned two Super Bowl rings, five Pro Bowl appearances and has the record for the longest interception in Super Bowl history (100 yards).

Accordingly, Harrison's thoughts on today's culture of entitlement has merit -- and is certainly not hypocritical. He is right to say that success does not come from being handed opportunities or from being told that we are good, great or worthy. It comes from working hard, being determined and persistent, and having a positive attitude; from making your own opportunities, continually improving, and trying over and over again until you get it right.

There's a reason they say anything worth doing is worth doing well. Ask any of the most "successful" people in our world today and they'd likely tell you that, at the end of the day, their accomplishments were achieved through nothing but hard work.

In a culture overly saturated with "political correctness" -- where the slightest comment challenging social norms is vociferously attacked -- it was refreshing to read a post asserting that any honor or success must be earned and not assumed. And, as far as I can tell from reactions on social media and in news commentary, other people found it refreshing, too.

Admittedly, it also doesn't hurt that I come from a long lineage of diehard Steelers fans who, thanks to Harrison, have just one more reason to wave their terrible towels with admiration and pride on game day.

To anyone who says Harrison is made solely of steel, I say this: he may be intense, aggressive and forceful, but he is not without emotion. In an interview on ESPN, when told that he was one of the best outside linebackers in Steelers history and showed a tape of veteran defensive coordinator Dick LaBeau, this was his reaction.