2012 is not a year that James Monroe Iglehart looks back fondly upon -- mostly because he spent a lot of that year staring at his phone, waiting for it to ring.

"We had done the pilot production of Aladdin in Seattle at the 5th Avenue Theatre in July of 2011. And then the powers-that-be at Disney went off to decide if they really want to bring this show to Broadway," Iglehart recalled during a recent phone interview. "So I and the rest of the cast from Seattle sat around, waiting for Disney to make a decision. And we waited. And we waited. And then we waited some more. And then I heard that Disney had decided to make Aladdin available to the Muny Theatre in St. Louis so that they could then produce a regional production of the show over the summer of 2012. And that news kind of broke my heart."

"And why was that exactly?," you ask. Well, ever since James and his Mom had gone to see the animated version of Disney's Aladdin back in 1992, he had dreamed of someday playing the Genie.

"I can remember clear as day that -- when Friend Like Me finished in the movie version -- I immediately leaned over to my Mom and said 'I want to do that someday,' " Iglehart continued.

There was just something about the Genie in that specific scene that really resonates with me. He is just so happy to be out in the world again after having been trapped inside of his lamp for 10,000 years. Which is why the Genie just pulls out all the stops as he demonstrates to Aladdin what he can possibly do with his three wishes. 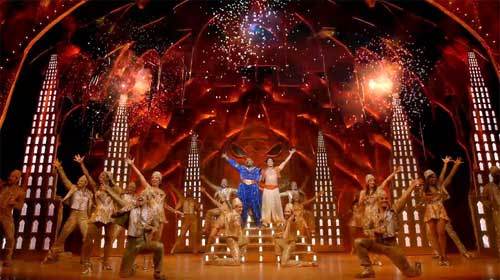 So after having played the Genie in Seattle, James dearly wished that he'd also get the chance to play this exact same part on Broadway. But what with the 2012 production in St. Louis (not to mention a second regional production at the Tuacahn Amphitheatre in Ivins that same year), it looked as though Disney Theatrical had lost confidence in this show.

Ah, but looks can be deceiving. As it turns out, Disney Theatrical hadn't actually lost confidence in the stage musical version of Aladdin. They just thought that the show needed a lot of work before it was then ready for Broadway. Which is why they actually made the Seattle version of Aladdin available for the Muny Theatre & Tuacahn Amphitheatre to produce. So that the creative team could then go view these regional productions and -- after seeing how this same material had been handled by others -- make some cold-blooded decisions about what needed to be done to fix this show.

"Now you have to understand that I actually had friends in those two regional productions of Aladdin. And while I'm happy for them because they got those gigs, I'm still really sad for me because I'm not the one playing the Genie. Which is my dream part," Iglehart explained. " "But then I hear through the rumor mill that the Broadway version of 'Aladdin' really isn't dead. That what the creative team is doing now is rehauling the script, writing some new songs. And I'm just hoping & praying that when Disney finally does decide to go forward with the Broadway production that they still want me to play the Genie." 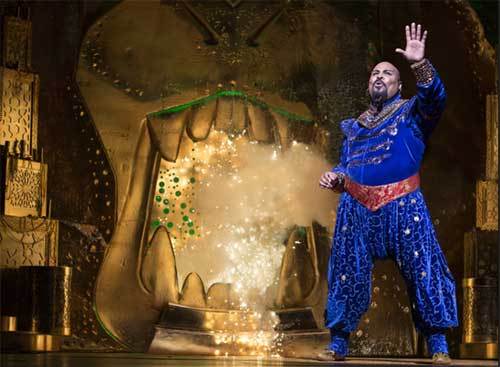 So let's now jump forward to the Fall of 2012. After months & months of waiting, James is told to expect a call from Disney Theatrical. Mind you, he doesn't know if this is the "You've-got-the-part!" call or the "Sorry-but-we're-going-with-somebody-else" call. All he knows is that Disney Theatrical is going to call.

"And my wife is like 'I have to go to work today. But I really want to be able to share this moment with you. So could you please record this call?,' " Iglehart remembered. "And I was like 'Well, what if they say I didn't get the role? Why would I want a recording of that?' And my wife was like 'Just tape the call for me, please?' "

So to kill time as he's waiting for this fateful phone call, James takes his niece out to buy a cell phone. And as the two of them are driving back home, Iglehart's own cell phone rings. And as he looks at the caller ID, James sees that it's Casey Nicholaw, the director-choreographer of Disney Aladdin.

"And I'm like 'Oh, my God! I have to take this call!' But I'm in traffic and it's illegal to answer your cell phone while you're driving. So I let it go to voicemail while I find a place to park," Iglehart said. "Once the car is parked, before I call Casey back, I turn to my niece and say 'Get your cell phone out and tape this. Your aunt wants to see what happens next.' "

And what did happen next? Well, see for yourself.

Yes, James' wish had finally come true. He was going to get to play the Genie again. Ah, but there were a few provisos, a couple of quid pro quos. Chief among them being that Aladdin wasn't actually going straight to Broadway. The show was first heading to Toronto for a lengthy out-of-town at the Ed Mirvish Theatre.

"And do you remember how bad this past winter was? Well, we went through that up in Canada. Which is where winter comes from," Iglehart laughed. "But we'd mush through the snow to the theater and just rehearse & rehearse because the creative team was continually reworking the show. In fact, we were making changes right up until we left Toronto."

And James only learned about one of these proposed changes just before he flew home to NYC.

"I am literally about to head out to the airport when a member of the creative team walks up to me, hands me an envelope and whispers 'Don't open this until you get on the plane,' " Iglehart states. "So I do just like this guy says. I wait to open this envelope 'til I'm actually in my seat on that plane. And what's inside for a brand-new opening for the show where the Genie leads the cast in singing 'Arabian Nights' which Casey wants us all to start rehearsing once we get back to New York." 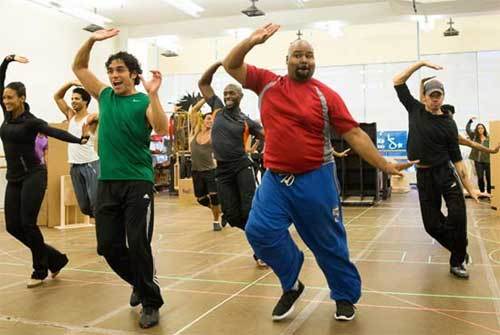 Which gave James some pause. Given that -- up until now -- the opening number for Disney Aladdin has been sung by the show's trio of narrators, Omar (Jonathan Schwartz), Kassim (Brandon O'Neill) and Babkak (Brian Gonzales).

"And Brian Gonzalez is like my best friend on the planet. So I really couldn't go through with this change without first getting Brian's blessing," Iglehart recalled. "So I called him and Brian said -- on behalf of the trio -- that they were okay with the change. That whatever it took to make sure that Aladdin became the best possible show before it opened on Broadway, they were willing to do. That's the caliber of the people that I'm working with here at the New Amsterdam. That's how generous & talented they are."

That's why every night -- as James is onstage performing Friend Like Me -- he makes a point of making eye contact with every other cast member who's out there making this eight-minute-long production number stop the show.

"As I keep telling these guys backstage, you're the real reason we get a standing ovation every night. Without you, I'd just be a big black guy in a blue suit who sings 'Can your friends do this? Can your friends do that?' as he points around an empty stage," Iglehart said. "I'm just so blessed to be part of this cast, to have Disney entrust with this role that I've always dreamed of playing."

That's why James always makes a point to spend a little extra time with those people who turn up at the stage door at the New Amsterdam and want to get a selfie with the Genie. Because he remembers all too well the important part a cell phone played in making his own lifelong dream come true.