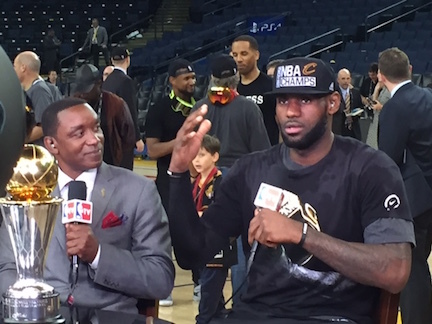 The Cleveland Cavaliers made history of their own. They became the first team in NBA history overcome a 3-1 deficit in the Finals. The Cavs watched the Warriors win an NBA Championship last year on their home court, ending 40-years of no championship. Last night, Cleveland had similar reason to celebrate their 93-89 victory as they waited 52 years to win their first championship.

One promise and one goal was achieved by one man who I even thought was in over his head. LeBron James won his third NBA Championship and brought his city a Championship he promised two years ago. It's something out of a storybook on how these two teams made history in one year. Golden State recorded a phenomenal season with 73-9 surpassing the 1995-96 Chicago Bulls 72-10 record. But failing to win the NBA Championship doesn't make them the greatest team ever.

That feat still belongs to Michael Jordan and his Bulls. I'm not sure we'll ever see a team come close to becoming the NBA's best team of all time. The Warriors were the closest we've ever seen after having such an amazing season, but James thwarted that goal proving all the naysayers and doubters wrong. Despite the suspension of Draymond Green in Game 5, the Cavs played outstanding basketball and deserve to be the champs.

"It was really an amazing year," said Golden State coach Steve Kerr. "It's been an incredible two-year run. We're disappointed that it didn't go our way at the end, but that's life."

However, it does leave a bad taste in my mouth based on Game 4. The Warriors were up 3-1 James and Green got tangled up and tempers flared. James complained about a no-call foul on Green, the league reversed the call after the game ended, then accessed a Flagrant 1 foul and Green is suspended. Then Cleveland wins three straight. So, what if Green had played in Game 5, pretty obvious, Golden State would've won.

"Everybody counted us out and that's when we strive the most," Cavs coach Tyronn Lue said.

"Obviously everybody will say, 'Oh, man, they won 73, but they didn't win a championship.' We didn't," Green said. "But I think this team accomplished a lot of great things individually and as a team, and those things can never be taken away."

The Warriors are not a defensive team and have conquered all with the 3-ball. That was the key to their success until Cleveland's defense shut that down. In last night's loss Stephen Curry scored 17 points on 6-for-19 shooting and Klay Thompson added 14 points on 6-for-17 shooting. Combined they totaled 31 points compared to Green's 32 points for the night. No help from their bench which has been explosive all season.

Many said rest the players toward the end of the season, but the record was too important to ignore. Curry received his second MVP in back-to-back seasons while Kerr became Coach of the Year. Many other awards were given to the organization except the main prize, their second NBA trophy. Looking back Golden State has so much to be thankful for and will have many years to surpass this unbelievable season.

But the facts remain true, James who is now a 3x NBA Champion, 3x NBA Finals MVP, 4x Most Valuable Player and 12x NBA All-Star. He's clearly the best player in the league and at the age of 31, he's proven hard work does pay off. The Warriors shouldn't feel bad for losing, they're former NBA champs and can bounce back to reclaim that victory. There's a lot of time to become better. Collectively they played bad as a team and no one is to blame.

"It's not over," Curry said. "Obviously, it's not how we wanted the season to end this year. But we are very, very confident, optimistic and excited knowing what we can accomplish going forward."