James Stewart has doubled down on his infatuation with Paul Ryan. Ryan's budget, he says, is a viable centrist starting point for budget negotiations, and attacks from "left and right" are mere "partisan rhetoric."

This is several different kinds of crazy. First, Stewart repeats his belief that Ryan's plan would increase taxes on investment income. But that belief has no basis other than Stewart's own belief that it would be a good idea. As I pointed out before, Ryan's own budget argues against raising taxes on capital gains and dividends. The only thing Stewart can find is Ryan's apple-pie platitudes about the need for tax reform. But Ryan's own vision of tax reform, as evidenced by his budget's own words, doesn't include higher capital gains taxes. (In addition, as a signatory to the Taxpayer Protection Pledge, Ryan is sworn to "oppose any and all efforts to increase the marginal income tax rate for individuals and business." That sounds to me like it includes the capital gains tax rate, which is a marginal income rate.) This is further evidence of columnists' ability to project their own fantasies onto Paul Ryan's handsome face.

More generally, Stewart pins high hopes on Ryan's embrace of tax reform. But all Ryan's budget actually says about tax reform can be summed up in two points: tax reform is good; and tax rates should be lower (25 percent for the top individual rate and for the top corporate rate, both down from 35 percent today). This of course allows credulous people to see themselves in Paul's blue eyes (see above). But if you want a serious starting point for tax reform, you should look at Simpson-Bowles or Domenici-Rivlin, both of which spelled out actual tax expenditures they would close (or Feldstein, Feenberg, and MacGuineas, or White House Burning, or any one of many other policy proposals that do the same). Ryan's "tax reform" is nothing more than a few talking points designed to score political points (why else would you specify the lower tax rates but not the closed loopholes), not a starting point for anything.

Stewart also plays the "centrist" card with unprecedented aggressiveness. He cites attacks by the Club for Growth as proof of Ryan's reasonableness. But when it comes to military spending, the Club for Growth isn't attacking Ryan from the right; it's attacking him from the left. Democrats want to reduce military spending as a share of GDP; so does every bipartisan deficit reduction panel; so does the Club for Growth (which thinks that the automatic spending cuts in the Budget Control Act should be respected). Ryan, by undoing the automatic spending cuts to preserve defense spending, is to the right of the budget debate, not in the center. In other words, everyone knows that if you want to reduce the deficit you have to cut defense spending--except Paul Ryan and James Stewart.

Last year he was going to convert Medicare into a voucher program where you could use your voucher toward insurance from a private company, but the value of the voucher was artificially capped so it would buy less and less health care over time. This year the only difference is that now you can buy insurance from a private company or from traditional Medicare. But in either case, the important points are: (a) the vouchers are designed to grow more slowly than the cost of health care, meaning a huge transfer of cost and risk from the government to individuals; and (b) reliance on the private market to reduce costs and improve outcomes (something it's failed at dismally for the last forty years). Having a Medicare plan shouldn't win you any points; it's what's in the plan that matters. At least for most of us.

This inattention to actual policy is how Stewart can think that "within the Ryan budget proposal is the outline of a grand compromise not all that different from the one President Obama and the House majority leader, John Boehner, reportedly came close to reaching last summer: long-term deficit reduction through tax reform, higher tax revenue and spending cuts." Well, yes, if you're going to stick to the level of abstract generalities, I guess the Ryan budget is similar to the Obama-Boehner deal in that both included tax reform and spending cuts.

In practice, though, the Obama-Boehner deal was nothing like the Ryan budget. We know the tax reform was completely different because Boehner was offering higher tax revenues that were not entirely due to supply-side fantasies. Ryan only achieves higher tax revenues by dictating that his plan will bring in 19 percent of GDP in tax revenue; nowhere does he say how we would actually achieve this while slashing tax rates. We also know the spending cuts were completely different, because Obama-Boehner did not convert Medicare to a voucher system (they did include spending cuts, but they kept the same benefit structure), while Ryan does.

Finally, here's one more way to think about the Ryan budget: 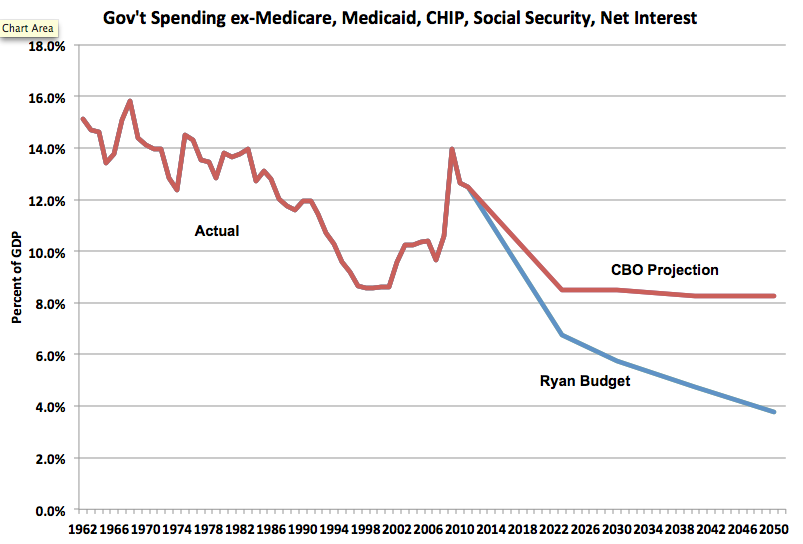 This picture shows all government spending except for Medicare, Medicaid, CHIP, Social Security, and net interest. (The data are from Tables 1.1, 1.2, 3.1, and 8.5 of the OMB's 2012 budget, historical tables.) It's a close approximation for discretionary spending, and it's what the CBO uses in its long-term projections. The Ryan Budget would reduce spending on everything except Social Security and health care to the lowest levels since before the Great Depression. 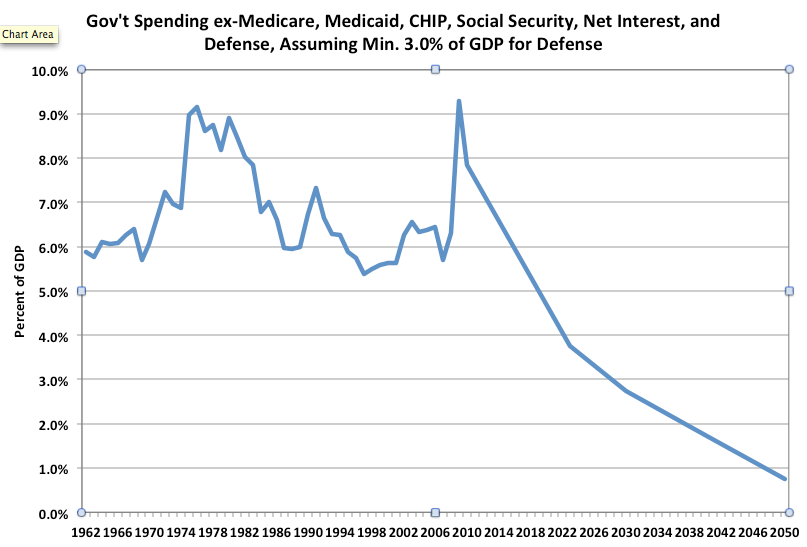 This is a blatant assault on the entire federal government except for health care, Social Security, and defense. This is not a courageous, centrist starting point for a real deficit solution.

James Kwak is the co-author of White House Burning: The Founding Fathers, Our National Debt, and Why It Matters To You, available from April 3rd. This post is cross-posted from The Baseline Scenario. Read more from the Fiscal Affairs series here.