Who: Tourettes Without Regrets founder Jamie DeWolf, the great-grandson of L. Ron Hubbard.

Years in the Bay Area: Life.

Current Gig: DeWolf is the host and founder of one of the best underground performance art shows in America, Tourettes Without Regrets. Part poetry slam, part circus and part rap battle, the event incorporates audience participation and an open mic, billing itself as "the fight club of underground art." (Battle rappers and contortionists share cigarettes outside.) And it's all run by the curious ringmaster: the red-headed stepchild of Scientology, DeWolf.

An outspoken critic against Scientology and his great-grandfather, DeWolf openly shares the tragic story of his grandfather, who fled the church and changed his name to protect his family. Now DeWolf channels his experience into his art, his movies and his show, which runs the first Thursday of each month and is now celebrating its 13th year.

DeWolf took a minute to sit down with The Huffington Post to talk about the future of Tourettes, the evolution of his art and why Scientology sucks.

So how did Tourettes get started? It started out of revenge because I kept getting kicked out of every open mic night in my hometown for reading disturbing material. The first time I went to a poetry slam, it was the only place that people wouldn't kick me out; they would just give me low scores. I remember my first one, I read this really long, confessional piece and the judges just crucified me. One judge gave me a four and clarified that it was a "what for?"

Ouch. And this didn't make you want to give up? I felt like there was no place for the mutants of art, and I wanted a clubhouse with all of them under one roof. The first incarnation was this really chaotic thing and I quickly learned that actual chaos isn't very entertaining. When we decided to scrap it, we billed our final show as "the worst show ever." Our goal was to get kicked out of the venue, the Stork Club in Oakland. We lit things on fire, cleared the place out with a fire extinguisher and at the end I had everyone come outside and urinate on me.

Did you get kicked out? No, they asked us back! The bartenders said they were sorry they didn't have to piss otherwise they would have joined us outside. Those guys are impermeable.

So what was the goal for the new show, the current one? More like rough sex instead of just a punch in the face. We wanted something that still felt wild and raw but incorporated rituals to bring everyone together and keep things orderly. The fact that we host legitimate rap battles for cash that get intense in downtown Oakland and we've never had a fight tells me that's what we're doing.

How do you think your location has influenced the show? Oakland has this sexy veneer of violence and menace intermixed with this Burning Man kind of art scene. And people perform just to perform. If we were in LA you'd have all of these rappers looking to get signed. Here, we just want a playground.

So from Scientology to an artist… There it is. [Laughs.] You know I was just on Inside Edition talking about Scientology. They asked me three times about "the one thing I would say to Katie Holmes."

And your answer was? I said I'd apologize for what my great grandfather did and commend her for escaping while she still could.

Were you raised in Scientology? I was not. My grandfather spent his entire life trying to get away from Scientology. I'm the only one in the family who will go on record and speak out against it.

Why is that? My mother watched Scientology destroy both her grandfather's life and her father's. When I first started talking about it publicly they said I needed to be careful. I went on Snap Judgment to perform a story about it and it went viral. Immediately I had the church coming after me. They came to my house even though I didn't have a listed address, they posed as performers at shows and they hired private investigators. It was scary, scary stuff. It seems like a fun piece of trivia--"Oh you're L. Ron Hubbard's great grandson, how crazy!" But it's not for people who lost 20 years of their lives to the lies of my great-grandfather and his brutally engineered confidence scam. It's devastating. But I made a promise to myself that I wouldn't let that quest consume me or my art.

So what's next for Tourettes? I want to get it on a national stage somehow. Maybe get it filmed in a professional way and host it on a network. I've thought about a tour but I'm not sure if that would work logistically, especially with no budget. If I had a budget, we would make shows that would destroy.

Tell me your dream Tourettes lineup. The ghost of Andy Kaufman and everyone I'm working with now, but with a lot more money.

Check out Tourettes Without Regrets at the Mitchell Brothers O'Farrell Theatre this Thursday, or at Oakland Metro the first Thursday of every month. Until then, check out photos from the show in our slideshow. Then watch DeWolf's legendary Scientology storytelling video from Snap Judgment below: 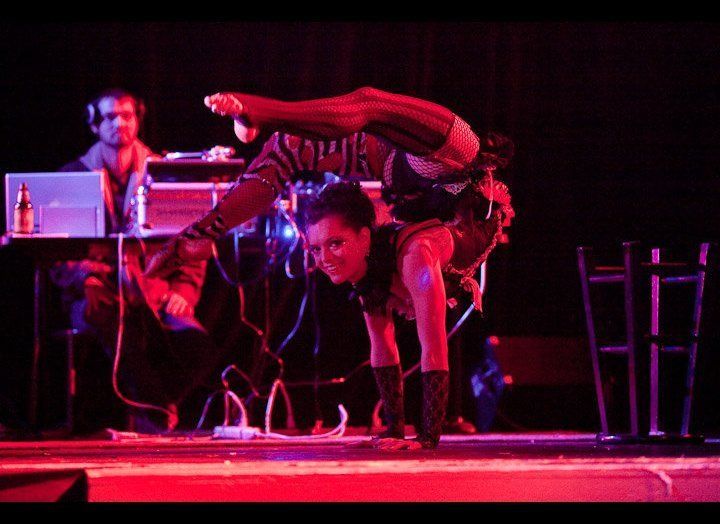