Arizona Gov. Jan Brewer (R) got in the April Fools' Day spirit on Monday, taking the opportunity to jab President Barack Obama over her longstanding insistence that he come tour her state's border with Mexico.

In a post on her Facebook page, she wrote, "In stunning news this morning, I learned that President Obama has finally agreed to tour Arizona's Southern border! APRIL FOOLS! Click LIKE if you agree.....the President should visit Arizona's border and to see for himself the dangers our citizens are facing each and every day with an unsecured border." She included the picture below in the post: 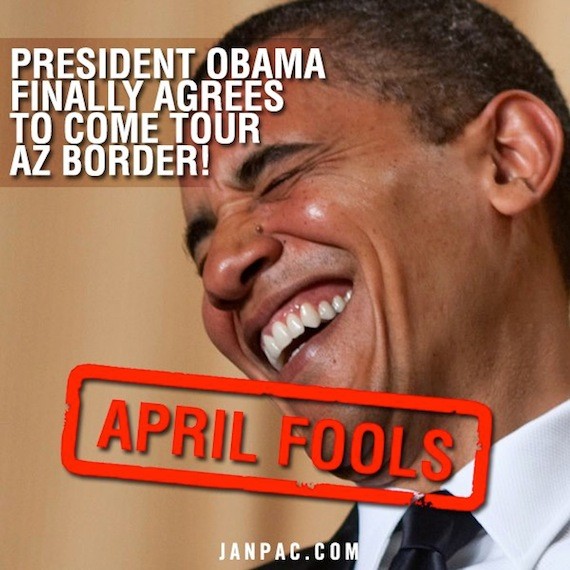 The most popular comment on the post suggests that Obama "won't go because he is afraid Sheriff Joe [Arpaio] would arrest him for being an illegal alien himself."

Brewer has repeatedly called for Obama to visit the border, suggesting that it is far less safe than his administration has claimed.

In February, Brewer called Arizona's border a "gateway for the drug cartels," telling Obama to speak with residents himself.

“Mr. President, you need to come down and talk to the ranchers, to some of the people that are working on the ground. They will tell you differently. But our border is not secure,” Brewer said at a news conference.

Rep. Paul Ryan (R-Wis.) also got in on the April Fools' Day jokes on Monday, sending out the following tweet.