One day after a brutal video of Janay Rice being knocked out by her husband and former Baltimore Ravens running back Ray Rice was released by TMZ, the woman at the center of the national uproar is speaking out.

In an Instagram post published Tuesday morning, Rice lambasted the media for resurfacing a painful private memory and airing it to the world.

"I woke up this morning feeling like I had a horrible nightmare, feeling like I'm mourning the death of my closest friend. But to have to accept the fact that it's reality is a nightmare in itself," she wrote. "No one knows the pain that the media & unwanted options from the public has caused my family."

While her Instagram is set to private, Rice told the Baltimore Sun her post was intended to be publicly released.

She wrote that she was hurt and embarrassed, and expressed outrage that her husband lost his career over the assault. "To take something away from the man I love that he was worked his ass off for all his life just to gain ratings is a horrific," she wrote. "THIS IS OUR LIFE!"

Shortly after the TMZ released the video, captured in an elevator in an Atlantic City casino, the Baltimore Ravens terminated Rice's contract and the NFL suspended the star indefinitely.

The 27-year-old pleaded not guilty to assault charges back in May and was allowed to enter a pre-trial intervention program to avoid prosecution. 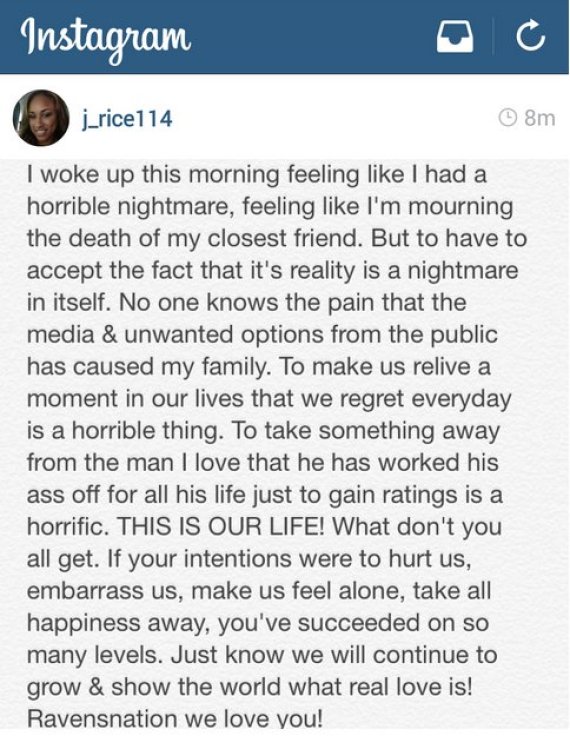