John and Jane represent two of the estimated 11,000 babies born in the United States each day to parents who want their children to reach their potential and thrive. Like generations before them, these families share a belief that by working hard, John and Jane will get a fair shot at upward mobility and economic security.

But an increasingly powerful body of data and research indicates that John and Jane's prospects in life will be determined to a troubling degree by factors outside of their control - particularly the conditions present in the communities where they grow up.

John was born in Oakland County, Michigan, a region of 1.2 million that includes white and blue-collar suburbs of Detroit. His family earns close to the county average of $64,424 a year, and they pay less than 30 percent of household income for their housing. Like more than half of his peers, John will attend pre-kindergarten, an advantage that improves academic, economic and social outcomes for children.

Jane was born in similarly-sized Hillsborough County, Florida, in a community outside of Tampa. Her parents' income is close to the county average of $48,660. Like nearly half of her neighbors, her family pays significantly more than 30 percent of their income on shelter, meaning they must scrimp on other resources. Like the majority of children in her county, Jane will miss out on early childhood programs, and will start kindergarten already lagging behind many of her peers.

About 78 percent of John's classmates will graduate from high school, and 50 percent will go on to earn at least an associate's degree. This postsecondary training will give John an edge in an increasingly competitive skilled job market.

But the situation is bleaker where Jane lives. Not even 70 percent of students receive a diploma within four years, and just 38 percent go on to earn at least an associate's degree. Jane's chances of graduating and gaining valuable skills are therefore diminished.

John and Jane's stories highlight a toxic combination of rising income inequality and stagnating economic mobility that damages our global competitiveness and our communities. It's also holding back our young people, at least 5.8 million of whom are "disconnected" meaning they are currently not in school and not working. This is a tragic loss to them personally and to our country as a whole.

The costs of disconnection are steep. Young adults who are not in school or working cost taxpayers $93 billion annually and $1.6 trillion over their lifetimes in lost revenues and increased social services.

The opportunity gap is widening in America, making it harder for young people to get ahead.

A September 2013 report by economist Emmanuel Saez of the University of California Berkeley found that between 2009 and 2012, the incomes of the top one percent of earners grew by 31.4 percent, while the incomes of the remaining 99 percent increased by just 0.4 percent.

New census data shows that median U.S. income has barely budged in nearly 25 years and that the average American worker makes less today than he did in 1968.

Meanwhile, the latest data from the Opportunity Index, a composite measure of economic, educational and civic factors in a region that contribute to upward mobility, shows that "Opportunity Scores" between 2011-2013 have only modestly increased across the country - 2.6 percent overall. 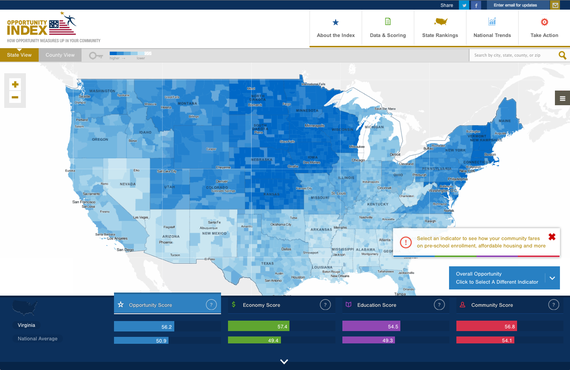 The Opportunity Index does capture several bright spots, which should be celebrated:
However, these improvements are tempered by sobering statistics.
This information, combined with new studies and research, paints an increasingly nuanced and powerful picture of the challenges our society and economy are facing. The data also provide a useful jumping off point for targeted advocacy and action that can reverse these negative trends and expand economic and social mobility for more Americans, including children such as Jane in Florida.

The truth is, we all are hurt by barriers to upward mobility. It will take all of us working together -- Democrat and Republican, rich and poor, public, private and nonprofit sectors, leaders and everyday citizens, to restore our nation's promise as a land of opportunity.

The good news is, there are solutions and dynamic organizations dedicated to ensuring millions of children like John and Jane get their fair shot.

The November/December issue of Washington Monthly magazine explores opportunity-related themes and the Opportunity Index. This comprehensive package elevates the issue of disconnected youth and approaches to help get them back on track so they can achieve their version of the American Dream.

We hope you will join in this urgent effort. We cannot condemn the next generation to an inescapable economic fate just because of their zip code.

Mark Edwards is the Executive Director of Opportunity Nation, a national, bipartisan campaign working to expand economic mobility and close the opportunity gap across America. Mr. Edwards also serves on the board of Horizons for Homeless Children, an experience that led him to build a national effort to increase economic opportunity for Americans. Opportunity Nation focuses on increasing awareness around opportunity-related issues, encouraging collaboration among public and private sectors, and advocating bipartisan federal policy changes targeted to improve the quality of life for Americans.