Editing a novel demands tact and delicacy at the best of times, but the process of creating my annotated and illustrated edition of Jane Austen's Emma was both a daunting and a thrilling one. Daunting because, as Henry James once tartly noted, Austen often inspires her champions to defend her as if she were a personal acquaintance, thereby making any shortcomings from an editor seem like personal insults to the dead as well as scholarly slips. Daunting, too, because a novel that had worked its way so deeply into the popular consciousness without any help from me might well seem not to need any interference from editorial middlemen. Could editing and annotating a novel as popular and well-known as Emma ever be proofed against the charge of teaching one's grandmother to suck eggs? (Extremely soft-boiled eggs, if Emma Woodhouse's father had anything to do with it.)

Then again, part of the thrill lay in my discovering new facets of Emma on every rereading, things that I hadn't been aware that the novel was saying, glancing at, or knowingly avoiding. If Austen's writing might seem light on overt references to the grand historical narratives of her time, it doesn't mean that she was either ignorant or dismissive of them; rather, Emma sketches an alternative model of what it means to live in history, by offering a wealth of little details that connote much larger complexes of social, economic, and emotional exchange. The choice of one cheese, card-game, or piano over another often carries great weight in the novel, but Austen could have some confidence that her original readers would 'get' those glancing references without her having to spell them out, whereas we might now need exactly the kind of clarification that footnotes can provide - not an aggressive, interpretative corralling, but a laying open of possible contexts, with which a reader can do as much or as little as she or he desires.

Choosing images for the novel also served to sharpen my awareness of the larger social world that Emma's glances and feints conjure up. The following images show some of the aspects of Emma Woodhouse's world that I most wanted others to share:

Bharat Tandon is the editor of Emma: An Annotated Edition [Harvard University Press, $35.00]. 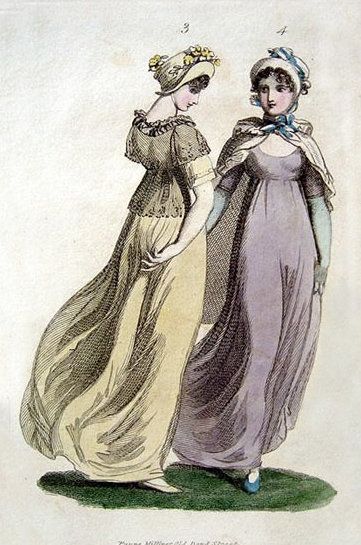 1 / 6
Regency dresses
Austen’s novels may now have become staples of ‘costume drama’, but in the world of <em>Emma,</em> costume prompts rather different dramas. The important role played in Highbury by Ford’s, ‘the principal woolen-draper, linen-draper, and haberdasher’s shop united,’ offers many hints about the social economy in which it figures. If, at one level, it is a female meeting-place where information (and gossip) can be shared, its centrality to the community also points to another fact about Surrey – that it exists at a geographical and economic remove from the central heart of London, which means that the majority of the local women will need to wear bespoke, locally-produced copies of expensive London dresses, rather than the originals themselves.