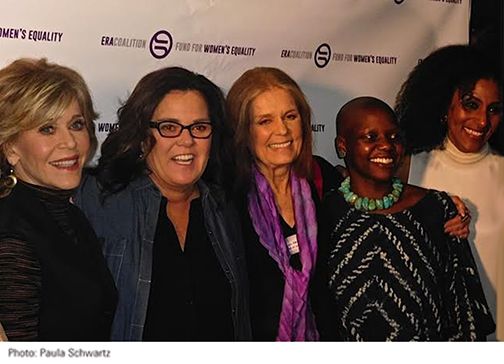 Sunday night's Superbowl may have been the focus for a majority of Americans, but a rival event took place at Caroline's Comedy Club, with Jane Fonda as M. C., introduced by Gloria Steinem. Calling herself a quintessential late bloomer to feminism, Jane Fonda recalled that she really did not understand what it was till she was 64, when she saw Eve Enssler in The Vagina Monologues. "I cried and laughed. How can you be a feminist, leaving the essential part of yourself behind as I did with my father, husbands, and lovers? My feminism dropped from my head into my body." And so began a night of comedy featuring Rosie O'Donnell, Gina Brillon, Michelle Buteau, Judah Friedlander, Wyatt Cenac, Sarah Jones, and Sasheer Zamata, who riffed with Fonda in several personae, including a character named Bella, named for Abzug.

"It is my dream to introduce Jane Fonda," Steinem began, stating among the actress' accolades that she was punished endlessly for being right about Vietnam. Steinem also gave a shout out to Michael Moore for his segment in Where to Invade Next. "80% of Americans do not know that we do not have an Equal Rights Amendment. Other countries do, and it benefits everyone. We are building a new coalition to put equal rights into the constitution." As to the night ahead, "It is hard for any of us to surpass Donald Trump trying to be funny."

Funny? We expected the jokes about Trump to come from Rosie O'Donnell, but she declined to talk about him, choosing less volatile but important topics: her kids, and heart attack, reminding women of her mantra for detecting a problem: HEPPP, hot, exhausted, pain, pale, puke. The packed house included Liz Holzman, Abigail Disney, Carolyn Mahoney, Carol Jenkins, Christine Lahti, Cynthia Nixon, and Jessica Neuwirth, author of Equal Means Equal, explaining why the time is NOW.

Gloria Steinem wrote the Foreword, and was an important part of making this night so successful for comedy and for fundraising. "Once Jane Fonda said yes, I knew we would have a great night," she told me after, even though it conflicted with the Superbowl, "Yes, and we had no brain injuries."