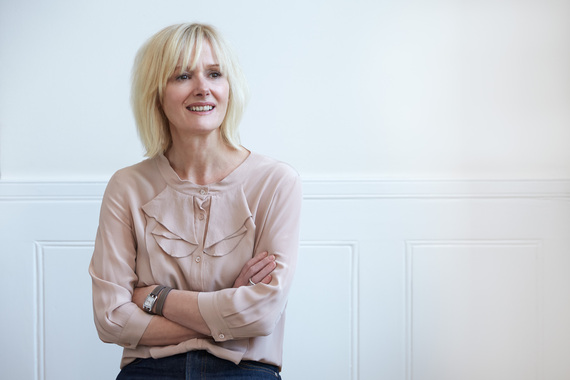 You've garnered this reputation of working your way up from the stockroom to Brand Director of Topshop. Tell me more about this journey.

I started at Topshop as a very enthusiastic twenty-something, excited to get into the fashion industry. I knew with the confidence of youth that if I could get in, I could work my way up.
I started on an extremely small salary and had to take a pub job in the evenings to pay my rent, but I absolutely loved it. I was in London in the 1980's and I felt like I had arrived. I ended up becoming a successful buyer and eventually kept moving up through the ranks.
Starting at the bottom and learning everything about the business was fundamental . The higher up I got the more I realized how useful it really was, as I was able to really understand how the business worked.
As a buyer, I was aware quite early on that if I gave my customers more than they anticipated that they would stay with me. I had a real pride in the clothes and realized that if I loved something, then the chances were that the customer would too. At Topshop, we focused on not only getting the clothes right but also trying to give the customers great experiences. For example we would give them access to great up and coming designers that they would have never been able to afford and VIP service they didn't expect from the High st in those days.

You then went to Whistles during the economic downturn in 2008, but despite the circumstances you were able to reinvent this brand. How did you go about doing this?

2008 was a terrifying time... 6 months after we took over, the two banks supporting us went under, and we had to refinance. We then lost most of our customers, as our vision for the brand was so different from what the brand was.
There didn't seem to be a way of re-invigorating the brand bit by bit, the change had to happen completely and in one season. We changed the clothes, the store design, and the branding and returned Whistles to the aspirational boutique brand it had been back in the 70's.
Fortunately the UK fashion press were phenomenally supportive of us. I think they liked the product but I think maybe they also liked the story, and kept backing us. We probably have them to thank for our survival today, because it was a really difficult time. But I think in a way, once we got through that it felt like, what's the worst that could happen? I think that freed us somehow.

Now who would you say your consumer is today?

She's about 25-45. She wants solutions to clothing crisis, she typically works in the creative industries and is independent and confident. She knows what her innate style is but isn't afraid to experiment with new silhouettes.
She has a lot of work and social occasions and wants to dress for them but in a contemporary way. She wants to feel like herself and look cool. We sell a lot of contemporary occasion wear for weddings and events, but done in a cool and modern way so that there's no danger of looking like the mother of the bride!

You talk openly about the need for more women in the boardroom. Can you speak on the disparity between male and female executives, especially in a female dominated brand? How do you think it can be lessened?

It's interesting because it definitely isn't changing fast. The gap still exists.
In fashion there are an awful lot of women - something like 80% working in the fashion sector are women. But as soon as you get to the boardroom, it drops to less than 10%. I think the gap exists for multitude of reasons. But in part I still think that being in the minority is difficult and until it becomes the norm, where you've got 50% on the board, the gap will remain.
It's the same if you look at politics, too. Until it's seen as normal - that there are 50:50 women and men - it's going to be hard. I also think that retail, as with a lot of other industries, is seen as a tough, competitive industry that attracts perhaps tough competitive people who work in a certain way.
Perhaps women aren't particularly attracted to that kind of culture. I know that sounds like a huge generalization but I think very often that is the case and it's a shame. I think maybe you have to force it; in politics, until women represent closer to 50%, maybe having quotas would be a good start.
Our head office is predominantly women at Whistles and that's sort of how it should be. I mean we're selling mostly women's clothes!

You also did interesting work at Oxfam and People Tree after Topshop. Tell me a little bit more about this.

I started working with Oxfam when I left Topshop. They approached me and said, "I expect you've got some time on your hands." Although a little cheeky it was true at the time.
So I helped them with their stores--they had something like 800 stores in the UK. To me, it was a great opportunity to be able to use the skills I had learned at Topshop to raise money for the charity. We spent a lot of time just trying to make the stores more attractive. I became more and more involved and visited some of their girls education programs in Niger, Burkina Faso and Zambia . Every pound that you spend on educating girls has a bigger return than almost anything else that a charity can do. I continue to work with them, but just as an advisor.
I became a non exec director of People Tree after Topshop, too, mainly because I knew that there was a lot I needed to learn in terms of fair trade fashion and I thought, where better to learn that than from one of the pioneers. It was hugely valuable.

What was your breakdown to breakthrough moment?

I left Topshop because I realized that I was becoming defined by what I did and I had allowed work to take over my life. I needed to find another way of working.
Leaving made me appreciate freedom so much. The feeling that it is not about having a huge amount of money--obviously, it's having enough to get by--but after that it's about being able to make your own choices.
I think that is so important - I wouldn't like to think that I would ever be trapped into doing something that I didn't want to do.

What kind of legacy do you wish to leave behind?

I'd like to be remembered, I suppose, as someone with integrity, who treated people well, and who was good fun. That's all I can ask for..