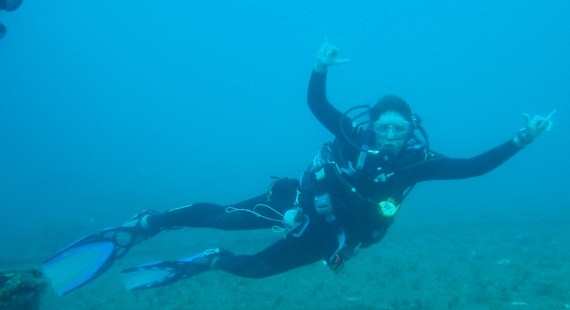 While Janelle did grow up in coastal Florida, curiously enough it was not until graduate school that she became interested in oceanography. It was quite by accident! While looking for something other than another math class to take, an introductory oceanography course caught her attention. She enrolled, and was soon hooked. Janelle realized just how much she enjoyed studying the sea. This paired with a strong desire not to work a desk job led to her pursuing a career as an oceanographer, where she felt she could make an impact. To Janelle, becoming an oceanographer was an occupation that had meaning and purpose.

Janelle graduated from Wesleyan College in Macon, Georgia in 1994, with an undergraduate degree in mathematics. She continued her education at Texas A&M University, where she earned a master's in computational mathematics and oceanography. In 2003, she was awarded a Ph.D. from the University of North Carolina at Chapel Hill in physical and biological oceanography.

In 2006, Janelle, along with her husband Jason, co-founded an oceanography consulting firm in Morehead City, North Carolina called Seahorse Coastal Consulting. (http://www.seahorsecoastal.com) Their company is known for its research, education (including scuba instruction), and outreach. They also are known for computer software development and technical support.

Dr. Janelle V. Reynolds Fleming enjoys the many components of her work. She spends her time manipulating large datasets to extract useful information; teaching SCUBA diving and science diving courses; conducting marine research; and providing community outreach and education. Read on for more about her exciting occupation, as described in her own words:

Humans have been studying the oceans since time began. Ancient civilizations monitored the tides and the moon as a way to determine the best fishing strategies for their village. During the age of exploration, many country-funded expeditions to discover new worlds included biologists and chemists aboard the vessel to record all the life that the vessels encountered. Interest in a systematic approach to studying the oceans began in the early 20th century, fueled by conflicts such as World War I and II. During this time, the United States government helped establish many research organizations at several universities by investing funds in the study of the oceans.

The study of the ocean is very encompassing, as there are many disciplines that go into the ocean. There is chemical oceanography, which investigates the chemical components of the water column, the organisms that live in the water column, and the chemicals they produce. There is geological oceanography or the geology of the ocean which seeks to understand questions such as what is the sand composed of, what are the rocks on the beach composed of, what is the crust under the ocean composed of? Why and how do these structures form, and what is the physical process behind it? There is biological oceanography, or the life within the ocean. This is a very broad term and covers many plant/fungi/animal/bacteria/protista interactions within the ocean. An additional aspect of oceanography is physical oceanography, which studies the mechanical drivers of the water within the ocean, records how the water and atmosphere interact, (including travel patterns), why they flow in any particular direction, and prediction of flow patterns based on mathematical equations and known constituents. One may also include marine technology (i.e. how to tie a bowline, what side of the boat is port or starboard) and marine legislation in this all-encompassing science field.

Always looking to inspire future oceanographers, earlier this year Janelle developed a new scientific diver course for middle and high school students. Her course introduces young people to the basics of conducting science underwater. It covers project design and implementation, data collection and analysis, and presenting results. Janelle seeks to educate the next generation of "citizen scientists who can take knowledge gained from the classroom back to their locale, and apply the knowledge there."

August 2016 Dive: Dr. Fleming with students off the coast of North Carolina.

In my next blog post, I'll blog about Alayna Westcom, an aspiring Forensic Pathologist and 2013 alumna from Bay Path University.

Follow Diane on Twitter @HerSTEMCareer where she celebrates and champions STEM women from around the world. To learn more about women's colleges, visit Diane's blog, Advantages of a Women's College, where a complete listing of all women's colleges in the United States is provided.