Janet Tavakoli is a born storyteller with an incredible tale to tell. In her captivating memoir, Decisions: Life and Death on Wall Street, she takes us on a brisk journey from the depravity of 1980s Wall Street to the ramifications of the systemic recklessness that crushed the global economy.

Her compelling narrative sweeps through her warnings about the dangers of certain bank products in her path-breaking books, speeches before the Federal Reserve, and in talks with Jaime Dimon. 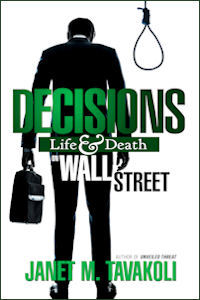 She probes the moral complexity behind the lives, suicides and murders of international bankers mired in greed and inner conflict. Some of the people that touched her Wall Street career reflect broken elements of humanity. The burden of choosing money and power over values and humility translates to a loss for us all.

To truly understand the stakes of the global financial game, you must know its building blocks; the characters, testosterone, and egos, as well as the esoteric products designed to squeeze investors, manipulate rules, and favor power-players. You had to be there, and you had to be paying attention. Janet was. That's what makes her memoir so scary. In Decisions, she breaks the hard stuff down with humor and requisite anger. As a side note, her international banking life eerily paralleled my own - from New York to London to New York to alerting the public about the risky nature of the political-financial complex.

Her six chapters flow along various decisions, as the title suggests. In Chapter 1 "Decisions, Decisions", Janet opens with an account of the laddish trading floor mentality of 1980s Wall Street. In 1988, she was Head of Mortgage Backed Securities Marketing for Merrill Lynch. Those types of securities would be at the epicenter of the financial crisis thirty years later.

Each morning she would broadcast a trade idea over the 'squawk box.' Then came the stripper booked for a "final-on-the-job-stag party." That incident, one repeated on many trading floors during those days, spurred Janet to squawk, not about mortgage spreads, but about decorum. Merrill ended trading floor nudity and her bosses ended her time in their department. Her bold stand would catapult her to "a front row seat during the biggest financial crisis in world history." Reading Decisions, you'll see why this latest financial crisis was decades in the making.

In Chapter 2 "Decision to Escalate", Janet chronicles her work with Edson Mitchell and Bill Broeksmit, who hired her to run Merrill's lucrative asset swap desk after the stripper incident. Bill and Janet shared Chicago roots and MBAs from the University of Chicago. Janet became wary of the serious credit problems lurking beneath asset swap deals, many of which involved fraud. The rating agencies were as oblivious then, as they were thirty years later. Transparency was important to Janet. She and Bill "agreed to clearly disclose the risks--including [her] reservations about "phony" ratings." Many Merrill customers with high-risk appetites didn't care. They got burned when the underlying bonds defaulted. Rinse. Repeat.

During that time, Janet penned a thriller, Archangels: Rise of the Jesuits, eventually published in late 2012. It probed the suspicious death of shady Italian banker Roberto Calvi. In June 1982, Calvi was found hanged from scaffolding under London's Blackfriars Bridge. Ruled a suicide, the case re-merged in 2002 when modern forensics determined Calvi was murdered. Neither Bill nor Janet bought the suicide story; though Bill joked he'd never hang himself.

Janet and I both moved to London in the 1990s, I left Lehman Brothers in New York for Bear Stearns in London in 1993 to run their financial analytics and structured transactions (F.A.S.T.) group. Those were heady days for young American bankers. We all wanted to be in London where the action was. Edson Mitchell and Bill Broeksmit wound up working for Deutsche Bank in London in the mid 1990s.

In 1997, Edson asked Janet to join him at Deutsche Bank given her expertise in structured trades and credit derivatives. The credit derivatives market was an embryonic $1 trillion. By its 2007 peak, it was $62 trillion. She declined. Edson died three years later in a plane crash.

In Chapter 3, "A Way of Life", Janet describes her personal epiphany and public alerts about credit derivatives and the major financial deregulation that would impact us all. In 1998, she wrote the first trade book warning of those risks, Credit Derivatives: Instruments and Applications. A year later, on November 12, 1999, the Clinton Administration passed the Gramm-Leach-Bliley Act that repealed the 1933 Glass-Steagall Act that had separated deposit taking from speculation at banks. In 2000, President Clinton signed the Commodity Futures Modernization Act that prevented over-the-counter derivatives (like credit derivatives) from being regulated as futures or securities. His Working Group included former Treasury Secretary and former co-chair of Goldman Sachs, Robert Rubin, Treasury Secretary Larry Summers, and Federal Reserve Chairman Alan Greenspan,

With Glass-Steagall gone, banks had the green light to gamble with their customers' FDIC-insured deposits and enter investment-banking territory through mergers. They "used their massive balance sheets to trade derivatives and take huge risks." Our money became their seed money to burn.

Once the inevitable fallout from this government subsidized casino unleashed the financial crisis of 2008, bank apologists, turned star financial journalists like Andrew Ross Sorkin would say the repeal of Glass Steagall had nothing to do with the crisis, since the banks that failed, Bear Stearns and Lehman Brothers were investment banks, not commercial banks that acquired investment banks. That argument missed the entire make-up of the post-Glass Steagall financial system. Investment banks like Lehman Brothers, Bear Stearns and Goldman Sachs had to over-leverage their smaller balance sheets to compete with the conglomerate banks like Citigroup and JPM Chase. These mega banks in turn funded their investment bank competitors who concocted and traded toxic assets. They supplied credit lines for Countrywide's subprime loan issuance. Everyone could bet on the same things in different ways.

While Janet's 2003 book, Collateralized Debt Obligations & Structured Finance explained the architecture and risks of CDOs and credit derivatives, her 1998 book became an opportunists' guide. One type of credit derivatives trade, a 'big short' that profited when CDOs plummeted in price, gained notoriety when Michael Lewis wrote a book by that name. Michael Burry, the man Lewis chronicled, ultimately testified before the Financial Crisis Inquiry Commission that, among other things, he read Janet's 1998 book before trading. Lewis wrote of the aftermath, Janet's analysis contributed to the main event. Taxpayers took the hit.

As the securitization and CDO markets exploded in the 2000s, credit derivatives linked to CDOs stuffed with subprime-loans became financial time bombs. Janet was one of a few voices with in-depth knowledge of the structured credit markets, sounding alarms. Her voice, and those of other skeptics (myself included) were increasingly "marginalized" by a media and political-financial system promoting the belief that defaulting loans stuffed into highly leveraged, non-transparent, widely-distributed assets wrapped in derivatives were no problem.

In early June 2010, Phil Angelides, Chairman of the Financial Crisis Inquiry Commission (FCIC) questioned former Citigroup CEO Chuck Prince and Robert Rubin (who became Vice-Chairman of Citigroup after leaving the Clinton administration. ) They denied knowing Citigroup had troubles until the fall of 2007. Incredulously, Janet listened as Angelides accepted their denial even though Citigroup was hurting in the first quarter of 2007 due to their $200 million credit line to Bear Stearns whose hedge funds had imploded.

So many lies linger. According to Janet, "One of the most unattractive lies of the 2008 financial crisis was that investment bank Goldman Sachs would not have failed and did not need a bailout." But then-Treasury Secretary and former Goldman-Sachs Chairman and CEO, Hank Paulson rejected an investment bid in AIG from China Investment Corporation while AIG owed Goldman Sachs and its partners billions of dollars on credit derivatives wrapping defaulting CDOs. That enabled him to arrange an AIG bailout to help Goldman Sachs recoup its money at US taxpayers' expense.

Goldman Sachs claimed it was merely an intermediary in those deals. Janet exposed a different story - presenting a list of CDOs against which AIG wrote credit derivatives protection. Underwriters of such deals are legally obligated to perform appropriate due diligence and disclose risks. Goldman Sachs had been underwriter or co-underwriter on the largest chunk of them, an active, not intermediary role. Some deals were inked while Paulson was CEO.

Janet reveals the dramatic outcome of those investigations in Chapter 5, "Systemic Breakdown." On January 26, 2014, Bill Broeksmit, 58, hung himself in his home in London's Evelyn Gardens (the block where I first lived when I moved to London for Bear Stearns.) She was shocked by the method. Bill had made clear his "aversion to death by hanging." Those decades in finance had crushed him.

Six months later, a Senate Subcommittee cited Deutsche Bank and Barclays Bank in a report about structured financial products abuse. Broeksmit's email on synthetic nonrecourse prime broker facilities was Exhibit 26. Banks had placed a large chunk of their balance sheets at risk, flouting regulations, and enabling a tax scheme. From 2000 to 2013, the subcommittee reported hedge funds may have avoided $6 billion in taxes through structured trades with banks.

Finally, in Chapter 6, "Washington's Decision: "A Bargain,"" Janet reminds us that September 2015 marks the seventh anniversary of the financial crisis. She calls Paulson and Rubin financial wrecking balls for their role in the crisis and cover-up.

She ends Decisions on the ominous note that "the government tried to hide the real beneficiaries of the bailout policies - Wall Street elites - behind a mythical idea of a "crisis of confidence" if we prosecuted, arrested, and imprisoned crooks. "

The real crisis of confidence though, is due to the clique of inculpable political and financial leaders. Alternatively, she writes, "If we indicted fraudsters, raised interest rates, and broke up too-big-to-fail banks, people would have more confidence in our government and in the financial system.."

Instead, we get Ben Bernanke espousing the "moral courage" it took to use taxpayers' money and issue debt against our future to subsidize Wall Street over the real economy, allegedly for our benefit. Big banks are bigger. Wealth inequality is greater. Economic stability has declined. The bad guys got away with it. Read Janet's illuminating book to see how and to grasp the enormity of what we are up against.

This review was first published at NomiPrins.com.