CAP FREHEL, France — RadioShack rider Janez Brajkovic quit the Tour de France after falling in one of several crashes in Wednesday's fifth stage, including one that brought down three-time winner Alberto Contador.

Contador was entangled in a crash at about the 44-mile mark and took off his helmet briefly, then gave a thumbs-up that he was OK and returned to the flat, 102-mile stage from Carhaix to Cap Frehel.

Tour organizers said Brajkovic, a Slovenian who won the Dauphine Libere last year, was taken by ambulance to hospital for treatment for head injuries after his crash.

Teammate Levi Leipheimer of the United States also was involved in a crash but returned to the race.

Nicki Sorensen bumped into the motorcycle of a race photographer and skidded along a roadside before returning.

France's Christophe Kern dropped out of the race after a crash. Three riders have dropped out, shrinking the peloton to 195 riders.

Thor Hushovd of Norway was wearing the leader's yellow jersey for a third straight day in the ride across Brittany.

Overall, world champion Hushovd holds a one second lead over Stage 4 winner Cadel Evans, while Frank Schleck of Luxembourg is third, 3 seconds back. After a dismal start to the race, Contador is 1:42 behind in 41st place. 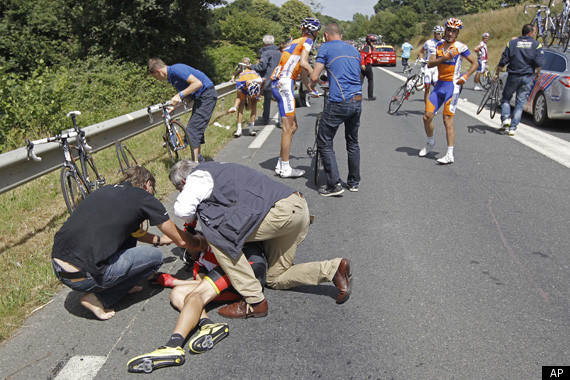 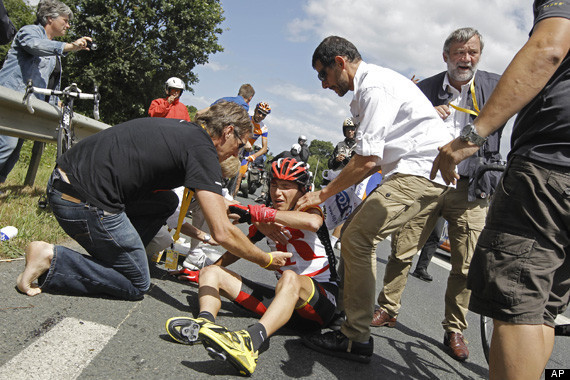