Janice Nowinski's "Seated Girl II" -- a blocky little nude with dun colored thighs and heavy umber fingers -- is a bit of a flirt. She is, in fact, the insouciant painted descendant of an anonymous coquette that the artist lifted from a 19th century "naughty postcard." As ragged as "Seated Girl II" may be -- her jauntily raised left eyebrow is a single swipe of mud colored impasto -- she triggers something: something vulnerable and human.

Nowinski, is a "painter's painter," one who likes to work against technical refinement, which can quickly degenerate into sentimentality. She is one the lookout for obscure, authentic feelings: sensations that she can render tangible with earnest brushwork. Nowinski's artistic process relies on instinct and she uses sincerity as a compass to provide aesthetic direction. "If one is authentically involved in the investigation," Nowinski comments, "the painting itself leads you into unexpected territory." 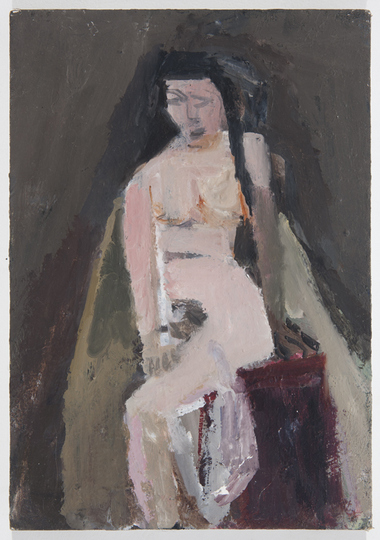 Gloriously out of synch with the current vogues of figurative painting, Nowinski mines the territory between Édouard Manet and David Park, avoiding the tricky cul-de-sacs of gender, sociology and feminist theory. "I consider myself a Humanist from beginning to end," she opines. Nowinski genuinely likes people, and paints them as a form of solidarity, and, in the case of the naughty girls, as a kind of painterly rescue and resurrection. "The images she is responding to now are anonymous," notes Nowinski's friend Kyle Staver. "Without her intervention and interpretation they would remain so." 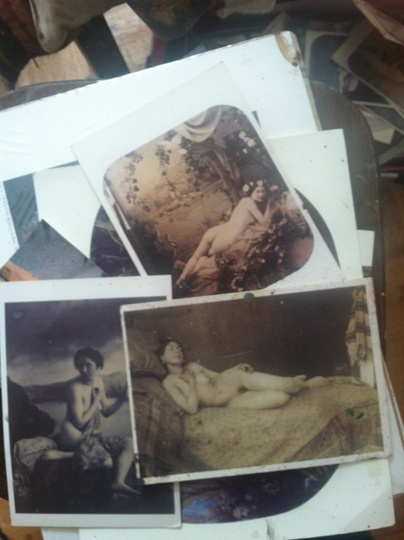 A harem of 19th century postcards in Janice Nowinski's album

When depicting the male figure, the artist has chosen a model who is less remote in time and culture. The shirtless dude who appears in Nowinski's "Shrouded Male" evolved from a snapshot of an old boyfriend -- one she had a complicated relationship with -- retrieved from the artist's personal photo album. "I'm risking a more personal and confessional series of paintings," Nowinski acknowledges. "Taking that image from the past and using it as a trigger for a painting today has enabled me to re-reason the event. By doing so I can take the emotional and nostalgic elements out of it: I can reconfigure the past."

In the case of the "Shrouded Male" the towel wrapped around the man's head held a suggestion of "guardedness," something that Nowinski now realizes was true to the actual man's character. It also has rich, metaphorical possibilities, worth exploring with paint. The river in the background, the loose belt and the semi-abstract background add to the poetic brew of memory, confession and ambiguity. 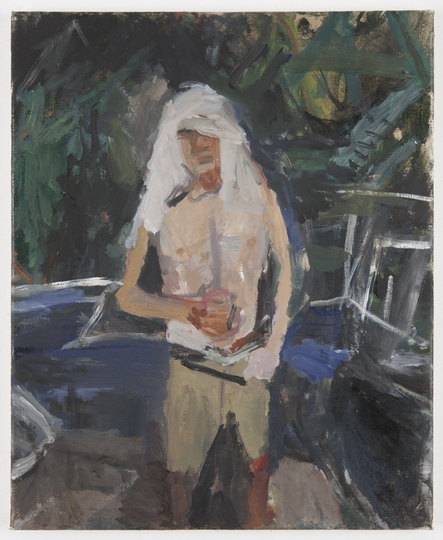 Seen as a group, Nowinski's recent paintings -- more postcard girls and shirtless guys -- are uncompromising, and more than a bit unexpected. "Two years ago," Nowinkski remarks, "I couldn't have guessed that my painting would have lead me here." Previously known as a painter of still lifes, Nowinski has taken her time to arrive, and has done so with the help of a tight group of friends and some stellar mentors.

A native of New York City, Janice Nowinski took her first art classes at the Brooklyn Museum as a child. Later, at an experimental high school she was part of a "decent" art program where she experimented with printmaking after not being allowed to paint. When Nowinski traveled to Italy after graduation to study violin making she fell in love with Michelangelo, Mantegna and Leonardo and reverted to art. Her higher education was "checkered" -- there were classes at the Art Student's League and then the New York Studio School -- until a mentor appeared: the landscape painter Gretna Campbell. 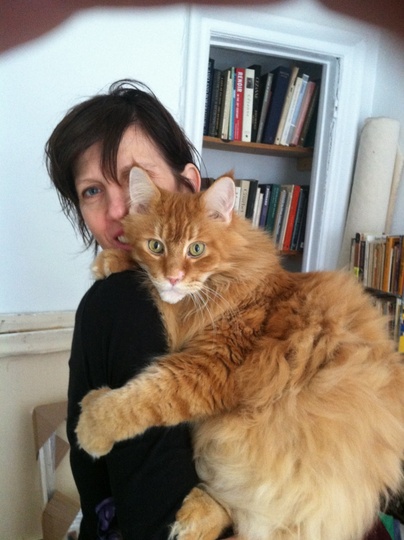 "She (Gretna) introduced me to Corot, Bonnard and Matisse; the painters who still inform my work. Gretna's insistence was that you find your own voice and look at other painters not to become them but to emulate their work ethic. The lesson that I took away from her was that I didn't have to obey the rectangle. She freed me up to work more organically and intuitively. I began working a la prima. If it didn't happen in the first pass there was no second chance."

By the mid 80s Nowinski had begun graduate work in painting at Yale, where she walked into a "rigorous, life-altering program." A new generation of figurative artists was germinating there: John Currin, Lisa Yuskavage and Richard Phillips were one class ahead, and Kyle Staver, who became a close friend, was a classmate. Then there was the faculty. Early on Nowinski took a class with stellar realist William Bailey who laid things out directly to his students. "It's really very simple," he warned them, "you either get it or you don't."

Professor Vija Celmins made it her task to introduce Nowinski to a wider range of contemporary painters. Celmins, who was a bit puzzled by the fact that Nowinski's two favorite painters, Edward Hopper and Paul Cezanne, seemed so different from each other. "She knew she had her work cut out for her," Nowinski recalls. Before long Celmins had taught Nowinski to become more generous and open-minded in her aesthetic views, asking her student "Why are you painting away from freedom?"

Mel Bochner, who saw another side to Nowinski also chided her about her taste in artists. "His first question to me, " Nowinski recalls, "was 'How long have you been married to Soutine?'" She remembers also being criticized for painting still lifes that displayed objects floating around in an undefined space. "My paintings looked and smelled like paintings but their intentions were not clear," Nowinski states. "I alluded to abstraction but didn't go all the way and vice versa with representation."

By the time she had finished Yale in 1987, her interactions with these powerful professors and other students had taught Nowinski to look at her own work "more dispassionately, in a larger context." A key lesson, Nowinski recalls, was that "... to have narrow reference was to make small minded paintings." 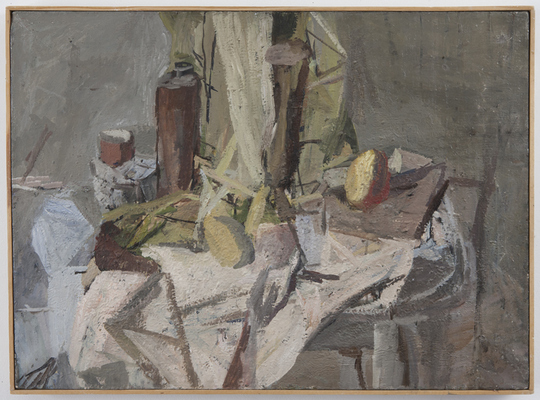 Tenacious to a fault, and in no particular hurry, it took Nowinski three years to complete "Still Life/Gray", which she decided was her "first mature still life after grad school." Over the next two decades she made more still lifes and also painted "conversations with masters" including transcriptions of works by Rubens, Poussin, Manet and Fragonard. Nowninski remembers doing "a lot of brooding, dark still lifes and even darker self portraits." A photo of her palette testifies to the determined mixing and scraping that happened over time. 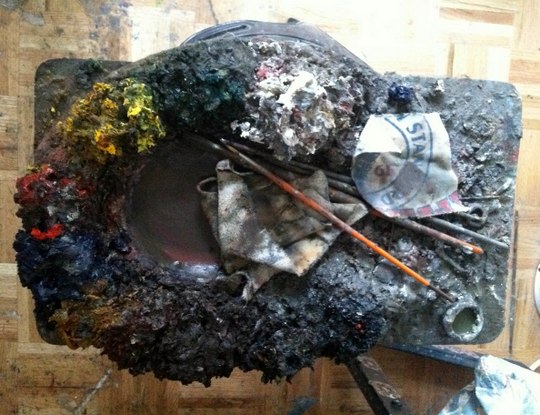 Part of what was happening was an aesthetic sorting-out process that was in fact a slow road to self-discovery. Nowinkski remembers it this way:

"I would spend a lot of time separating reproductions into piles for future paintings: the good pile and the bad pile. I tore up a book of "All the paintings at the Louvre" which I had bought for $20 at the Strand Bookstore. One day I was mindlessly making piles and I came across the odalisque by Boucher and tossed it into the "bad pile". All of a sudden I realized what was missing from my work: a sense of humor and also the possibility that sex could be a great painting subject for me. My persona of being a "dark, psychological painter" was coming to an end. So I mixed in a little Boucher/frivolity into the dark, broody cocktail and this allowed more of myself to come out in the studio." 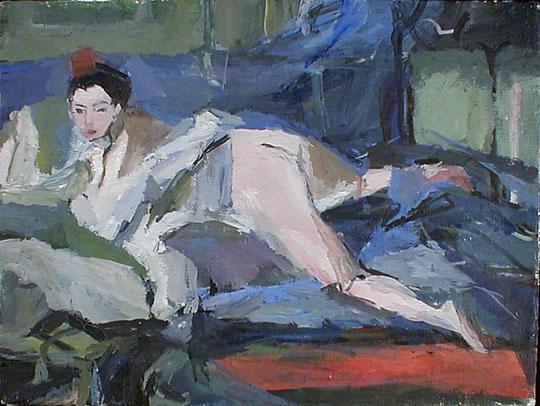 Over time, working through it all, looking for the right mix of moods and subjects Nowinski managed to build up an impressive knowledge of the history of painting. The "permission" that Boucher's image had given her to add a little something -- just the right amount of "wrong" -- would lead over time to her recent postcard and photo based works.

"In all good painting," says Kyle Staver, who has been watching Nowinski develop, "the painter steps off the curb and finds a way to cross to what is uniquely theirs." Nowinski, still a bit surprised to find that she is painting from "a shoebox filled with snapshots and 19th century naughty girl postcards that were sent to me by a friend," is nonetheless pleased and excited about the new zone of feeling where her work has taken her.

"It is exactly where I want to be."

Correction: An earlier version of this post used "still-lives" instead of still lifes. We regret the error.