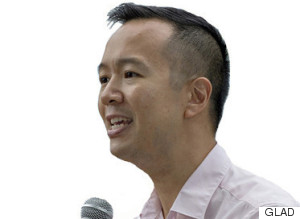 With marriage equality headed to United States Supreme Court next month, I talked with Janson Wu, Executive Director of Gay and Lesbian Advocates and Defenders (GLAD), the architects of marriage equality in this country and co-counsel on DeBoer v. Snyder, one of the upcoming gay marriage cases going before our highest court. Last November the 6th Circuit Court of Appeals ruled 2-1 against couples in cases coming from Michigan, Kentucky, Ohio and Tennessee thereby creating a "circuit split" warranting the U.S. Supreme Court to settle the issue.

The Supreme Court has agreed to hear all four of these cases. GLAD was instrumental with the Michigan case DeBoer v. Snyder. April DeBoer and Jayne Rowse are two amazing women. They are both nurses and the mothers of four children they fostered and adopted. They are devoted to each other, to their kids and they should be able to marry. Mary Bonauto GLAD's Civil Rights Project Director is re-joining the DeBoer legal team after helping gather experts for their historic March 2014 trial. GLAD and Bonauto won the ground-breaking Goodridge case in 2003 making Massachusetts the first state in the U.S. where gay and lesbian couples could legally marry. GLAD also pioneered the legal strategy that brought down the Defense of Marriage Act.

I talked to Wu about this historic journey towards national marriage equality and his spin on our LGBT issues. When asked what his personal commitment is to LGBT civil rights Wu stated:

Personally as an openly gay man these issues effect me greatly. I actually just celebrated my five-year wedding anniversary last October and we married in Massachusetts thanks to GLAD the organization that I work for. I'm also committed as an ally because I understand that the entire LGBT community stakes an interest of those that aligned with mine and so I feel strongly about that responsibility of being an ally to the entire community. Then finally not just ending with LGBT rights, but think about the broader social justice movement and both GLAD's place and responsibility in promoting that and my own personal one as well too.

Janson Wu is a graduate of Harvard College and Harvard Law School. Wu has served as GLAD's Executive Director since December 2014 following eight years as a staff attorney and a seven-month tenure as deputy director. During his time at GLAD Janson has been deeply involved in the extent of GLAD's work, including the rights of LGBT elders, family law and parentage, employment benefits, transgender rights, DOMA and marriage equality. He served on the legal teams of many of GLAD's significant cases, including the DOMA challenges Gill v. OPM and Pedersen v. OPM and the successful asylum case of Ugandan activist John Abdallah Wambere. GLAD recently filed their U.S. Supreme Court brief arguing that barring gay and lesbian couples from marriage denies them a fundamental freedom and violates our nation's most cherished and essential guarantees. I share in their belief that no family in our country should be excluded from the dignity, security, stability and legal protections that marriage confers. This injustice against our LGBT families and those we love has gone on far too long and it's time to end it once and for all. This case is scheduled to go before the U.S. Supreme Court of the United States April 28, 2015.
For More Info and Support: glad.org