Technical issues having to do with fun stuff like revisions and seasonal adjustments are playing a role in the monthly numbers right now so it's good to average over a few months. Over the last three months, the average rate of job growth has been 200,000, compared to about half that if you go back a few months.

As I stress below, today's report contains a critical message for policy makers; we've got some real momentum here on the most important economic issue to the American people: JOBS... let's not screw it up.

As shown in the charts -- with apologies for the lame-looking arrows -- the trend is our friend both on the unemployment rate and net job growth. 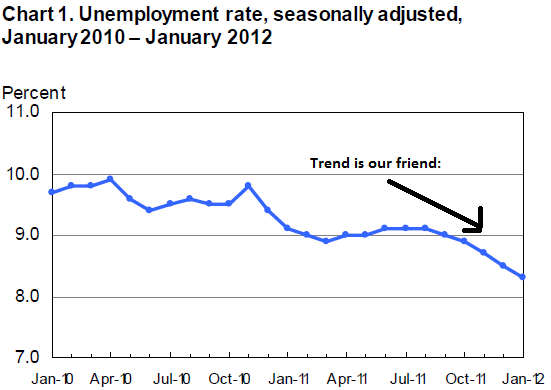 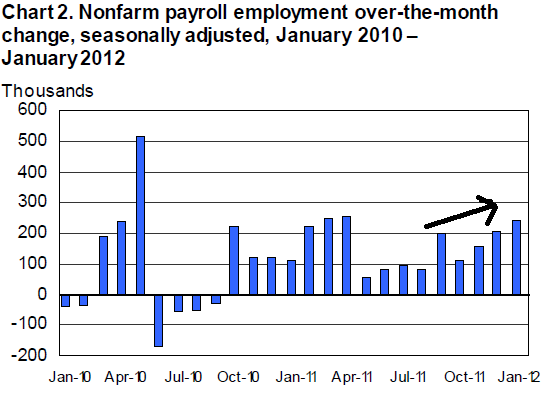 Source: BLS, with my arrows, obviously.

Now, for some caveats.

Re: that last point, as I wrote yesterday, this is your unemployment rate under fiscal drag. While policy makers are very unlikely to follow current law -- full sunset of Bush tax cuts -- in the near term, they're also unlikely to go the other way -- to add a fiscal boost to the recovering job market. Even extending the payroll tax cut and UI benefits is proving -- predictably -- to be a heavy lift.

This jobs report, which clearly shows positive momentum, should force Congress to absolutely seal that deal immediately. From the perspective of working families, the most important part of the economy is showing some improvement. We're not talking banks, GDP, industrial production, credit flows, deficits, interest rates -- we're talking jobs.

Let's not screw this up.