GQ has a lengthy profile of "Mad Men" star January Jones, conducted during a Chicago-LAX flight over six beers.

Jones, who started out as a model, talks about (but doesn't name) her first boyfriend when she moved to Los Angeles to try acting.

"The guy I was dating when I first got to L.A. was not supportive of my acting," she says. "He was like, I don't think you're going to be good at this. So--fuck you! He only has nice things to say now--if anything, I should thank him. Because the minute you tell me I can't do something, that's when I'm most motivated."

The interviewer later writes that the ex was Ashton Kutcher.

Another person she came across, when first working at 18 as a model in New York, was Laura Steinberg, ex-wife of 80's financier Saul Steinberg and the mother of her boyfriend Julian Steinberg.

Laura became something of a surrogate mother, taking January on far-flung vacations--a wedding in Italy, a month in Bali--even after January had split with her son.

"Laura taught me how to hold my knife and fork and to be a lady," says January. "To keep my forearms on the table--never my elbows--and place my napkin on my lap. She got me out of the models' apartment, and my Fargo accent was really strong then, so she taught me how to speak."

The whole interview is here and photos of a leather-and-lace clad Jones are here. 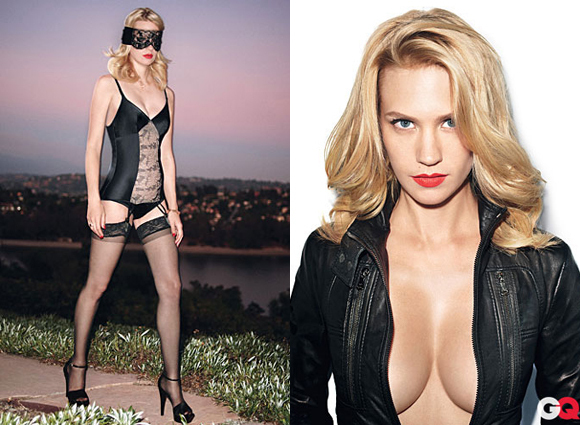