The first month of 2014 is over, leaving behind a nation blowing hot and cold.

While the polar vortex brought a big chill to the eastern half of the country, a resilient ridge of high pressure brought warm, dry weather to most states west of the Rockies including Alaska. In the wake of both, records have been broken and the pattern looks to continue into the first half of February. 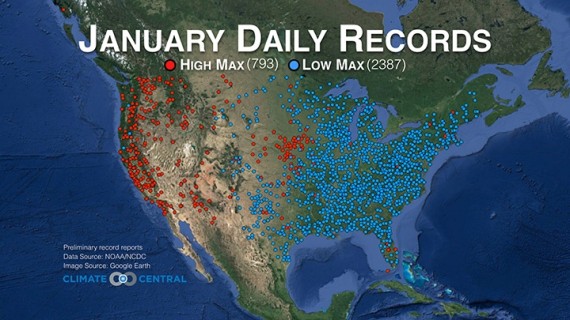 Notable record lows from the first Arctic blast include Mobile, Ala., which topped out at 35.1°F on January 7 and Orlando, Fla., which saw a high of 48°F that same day. Monthly record lows were also set on that same day at a number of locations from Arkansas to Wisconsin. The coldest record set was a bone chilling minus 18°F in Laona, Wis.

While teeth were chattering east of the Mississippi, sunglasses and t-shirts were the norm for a number of locales out West, especially California, Oregon, and Nevada. The mercury hit 73°F at San Francisco International Airport on the January 15, which tied an all-time high for the month of January at that station. That record was tied again the next day. Further inland, Sacramento hit 79°F on January 24. That’s 2°F shy of the all-time January record high.

An hour northeast of Las Vegas, Valley of Fire State park set daily records on 3 consecutive days from January 15-17 with temperatures in the upper 60s and low 70s.

Another area under the influence of the monster West Coast ridge was Alaska, where record high temperatures were also set. In Port Alsworth, the temperature reached 62°F on January 27. That ties the official January record high for any location in the state.

This pattern comes on the heels of a year when record lows outpace record highs in the U.S. for the first time since 1993. But before assuming the same pattern will continue this year, it's worth looking back at where we were last year. On January 30 last year, few would've predicted record lows would outpace highs. By that date, 2,132 record daily highs had been set or tied while only 1,232 record for lowest daytime highs were set or tied. 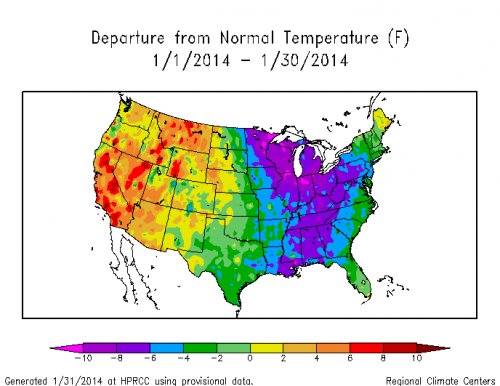 And while the eastern half of the U.S. has dealt with more than it's fair share of cold weather dating back to December, other parts of the globe have been baking. For example, large portions of Australia have suffered through a record-breaking heat wave earlier this month.

That's a small comfort to those in the Midwest and Northeast, though. Looking ahead to the next 8-14 days shows the pattern is likely to continue with the exception of Alaska. While this past weekend was warmer, colder-than-normal temperatures could creep back into the Midwest as early as Monday and expand eastward throughout next week. Continued warm temperatures are likely for much of California and the Southwest, but cold air is likely to return to Alaska sending confused plants back into hibernation.