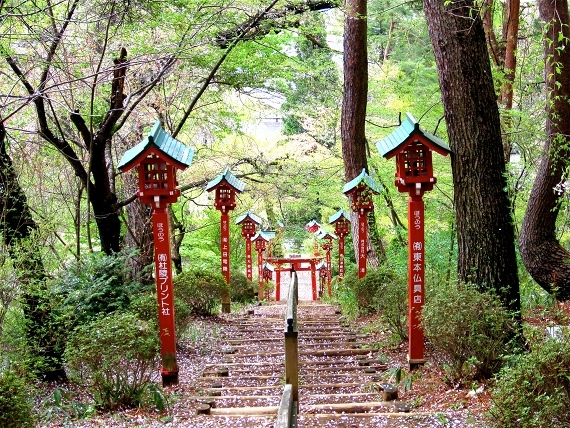 Every town or village has a shrine with cherry blossoms to brag about. This is in Morioka, Iwate.

The Cherry Blossom Front will break in Tokyo around the end of March until the first week of April. If you're coming to the capitol, I've written a guide to all the best viewing places in town here on The Huffington Post. 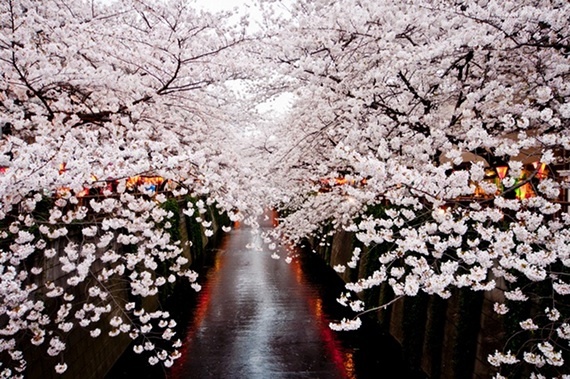 Cherry blossoms transform the country into party central with flower-viewing parties day and night. Traditionally, strings of lanterns are hung from tree to tree so the fun can go on after dark. Blossom viewing at night is a glorious experience.

Don't miss Ueno Park and the Meguro or Sumida river walks if you're in town. At the Sumida river walk, you can carry on to towering Sky Tree. Take the elevator 350 meters up to the viewing platform. There, stroll around the deck and look for the pink glow that mean blooming stands of trees all over the city.

The grounds around Asakusa Sensoji temple and Asakusa Jinja shrine don't have large stands of trees but the setting of classical Japanese architecture and the delicate pink blooms is luminous. Just so you know, Meiji Shrine in Harajuku is a favorite destination for visitors, and though it has cherries in its extensive grounds, there are none within the shrine courtyard.

Of course there's far more to cherry blossoms -- and the country -- than just Tokyo. Travel during cherry blossom season is especially fun because visitors can see how deeply Japanese are obsessed with cherry trees. Flashes of pink brighten up the most rural landscape and even the smallest village has their own stand of cherry trees to brag about.

If you are planning a trip during April, know the farther north you go, the later the blooming season. Blossoms in Iwate and Aomori prefectures hit critical mass the last part of April and first few days of May. Niigata and Nagano towards the Japan Sea also bloom later than the Tokyo area. 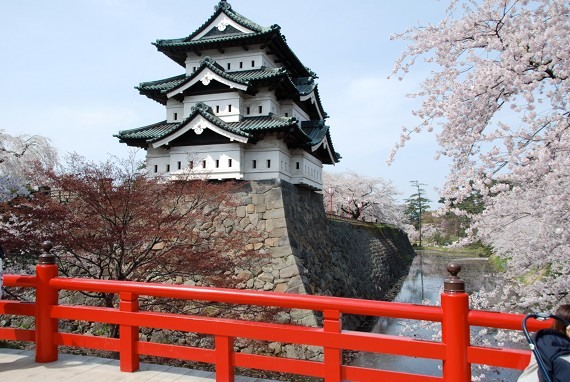 Everyone has their favorite destinations for hanami outside of Tokyo. Mine is Hirosaki Castle Park in Aomori prefecture. It's under three hours from Tokyo by the Shinkansen express trains and I stay overnight in Aomori City, a port famous for its seafood.

Getting around Japan is expensive for locals, but there are a couple of good options for visitors who plan their itineraries in advance.

The Japan Rail Pass is an amazing deal and includes the Shinkansen super express. Japan is not really that big, which means travel by rail is a great way to get around and see the country. This pass is, of course, available all year round, not just for the cherries.

A week long Rail Pass as of April 1, 2014, is 29,110 yen ($300) -- that's less than the cost of one round-trip ticket to Kyoto. This gives travelers access to the massive JR network. There are some restrictions. For example, the pass doesn't let you ride the fastest of the Bullet Trains -- but the difference between them is only around fifteen minutes so that is very manageable. Go to their English website and have a look at all the details. Redeeming the pass in Japan is pretty simple and Tokyo Station even has a special travel counter for pass holders. 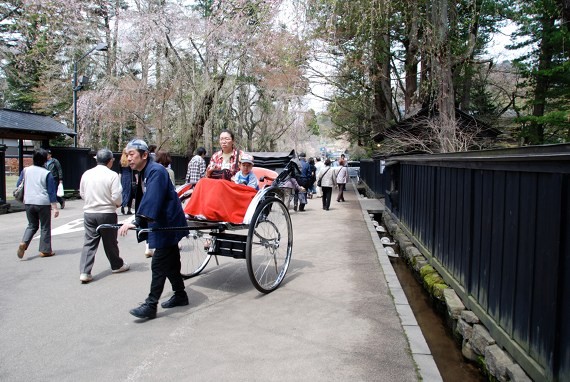 Cherry blossoms bloom in May in the north, like here in the old samurai town of Kakunodate.

The JR rail pass or variations of them, used to be one of the few low-cost transportation options for travelers. That is changing this spring -- finally -- as Japan's top airline carriers, All Nippon Airways and Japan Air Lines, introduce excursion fares that can treally boost your travel buck. The deals for both airlines are quite similar.

From April 1st, All Nippon Airways "Experience Japan Fare" gives inbound travelers a one-way fare to any ANA destination in Japan for 10,800 Yen ($108). This is the website with the details.

They call each one-way trip a "segment" and you can book up to five segments during one visit to Japan. There are restrictions. For example, to purchase these tickets you must already have your international flight as they need the ticket code from that for input. This website lists most of restrictions, look it over carefully.

The new fare is part of the ANA's 'Is Japan Cool' campaign, which is a fun site to learn more about the country before you visit.

Japan Air Lines' "One World Yokoso/Visit Japan Fare" is set at the same price and also lets visitors book up to five segments as long as they have a valid international ticket. But, and this is important, to qualify you need to travel to Japan on a partner in the Oneworld Airline Alliance. Go to the JAL webpage for details and blackout dates. And here is a list of the Oneworld carriers.

The JAL Visit Japan fare is good through the end of March, 2015. There can be some extra fees when departing or arriving at Haneda, Chubu or Kitakyushu Airports.

Despite the restrictions, these airline deals are incredibly cheap compared to normal excursion fares and long overdue. Japanese Prime Minister Abe's government is determined to boost inbound travel numbers to Japan -- especially since Tokyo secured the 2020 Olympics -- and making transportation more affordable is on the agenda. 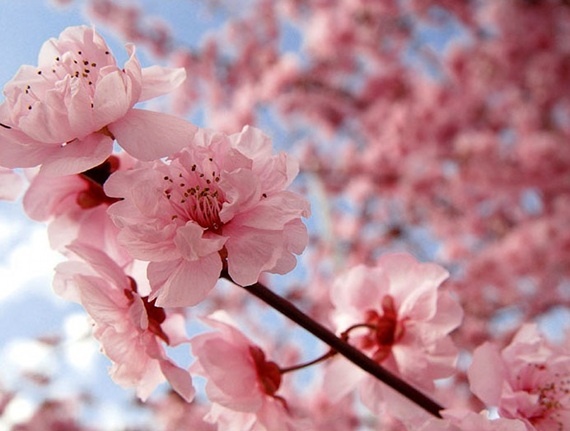 Japan is covered in fluffy pink petals during April and May. Photo courtesy All Nippon Airways.

Cherry blossom season is truly breathtaking and worth planning your trip to Japan around. For a schedule of the best viewing times and guide to locations for cherry blossoms around the country, this is a great website.