By Minami Funakoshi and Kiyoshi Takenaka

TOKYO (Reuters) - Japanese authorities have ordered nearly a quarter of a million people from their homes after a deadly earthquake struck a southern island and the search for survivors went on into the early hours of Sunday amid worsening weather conditions.

A 7.3 magnitude tremor struck early on Saturday morning, killing at least 32 people, injuring about a thousand more and causing widespread damage to houses, roads and bridges.

It was the second major quake to hit Kumamoto province on the island of Kyushu in just over 24 hours. The first, late on Thursday, killed nine people.

Heavy rain and wind were forecast overnight, with temperatures expected to drop to 13 degrees Celsius (55 degrees Fahrenheit). Firefighters handed out tarpaulins to residents so they could cover damaged roofs.

"The wind is expected to pick up and rain will likely get heavier," Prime Minister Shinzo Abe told a government meeting. "Rescue operations at night will be extremely difficult ... It's a race against time."

Television footage throughout Saturday showed fires, power outages, collapsed bridges, a severed road hanging over a ravine and gaping holes in the earth. Residents near a dam were told to leave because of fears it might crumble, said broadcaster NHK.

"I felt strong shaking at first, then I was thrown about like I was in a washing machine," said a Tokai University student who remains isolated in the village of Minamiaso.

About 422,000 households were without water and 100,000 without electricity, the government said.

NHK said around 240,000 people had received evacuation orders across the affected region amid fears of landslides. Some shelters were too crowded to admit any more people, it said.

Troops set up tents for evacuees and water trucks were being sent to the area. Around 25,000 extra soldiers were due to arrive, as well as more police, firefighters and medics.

The National Police Agency said 32 people had been confirmed dead. The government said about 190 of those injured were in a serious condition.

Chief Cabinet Secretary Yoshihide Suga said nearly 80 people were believed trapped or buried in rubble. Rescuers pulled 10 students out of a collapsed university apartment in the town of Minami on Saturday.

Japan is on the seismically active "ring of fire" around the Pacific Ocean and has building codes aimed at helping structures withstand earthquakes.

A magnitude 9 quake in March 2011 north of Tokyo touched off a massive tsunami and nuclear meltdowns at Fukushima, contaminating water, food and air for miles around. Nearly 20,000 people were killed in the tsunami.

The epicenter of Saturday's quake was near the city of Kumamoto and measured at a shallow depth of 10 km (six miles), the United States Geological Survey (USGS) said. The shallower a quake, the more likely it is to cause damage.

However, no irregularities were reported at three nuclear power plants in the area, a senior government official said.

The city's 400-year-old Kumamoto Castle was badly damaged, with its walls breached after having withstood bombardment and fire in its four centuries of existence.

Bank of Japan Governor Haruhiko Kuroda, speaking at a G20 event in Washington, said it was too early to assess the economic impact but bank operations in Kumamoto were normal.

The USGS, which is a government scientific body, estimated that there was a 72 percent likelihood of economic damage exceeding $10 billion, adding that it was too early to be specific. Major insurers are yet to release estimates.

Electronics giant Sony Corp said a plant producing image sensors for smartphone makers would remain closed while it assessed the damage from the quakes. One of its major customers is Apple which uses the sensors in iPhones.

There have been 347 aftershocks of at least level 1 on the Japanese scale since Thursday's shock, NHK reported. 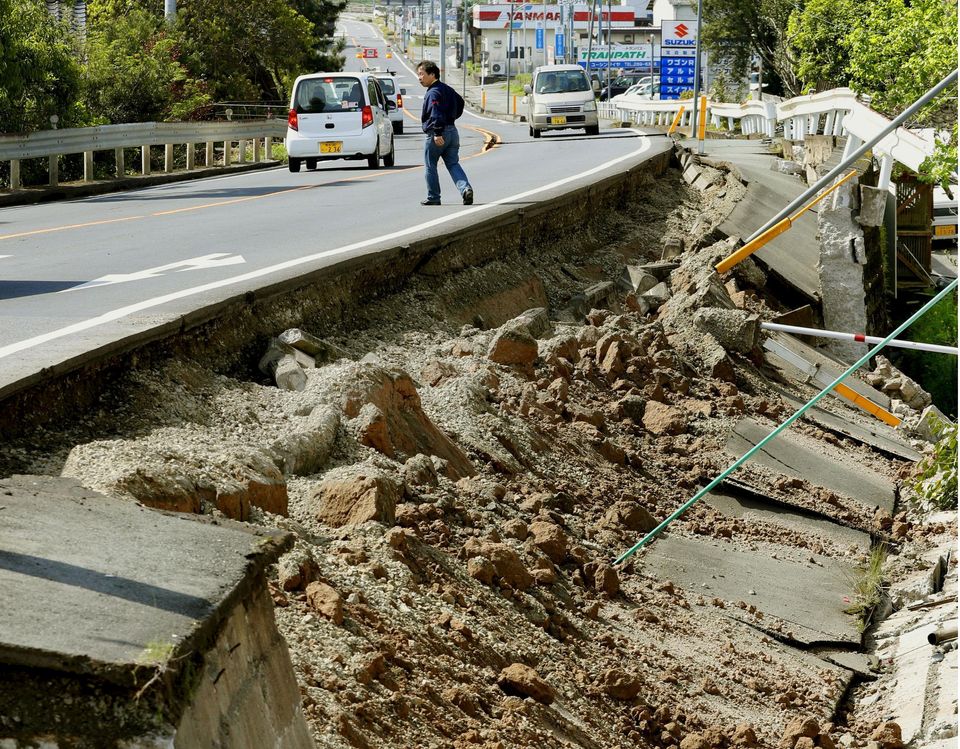