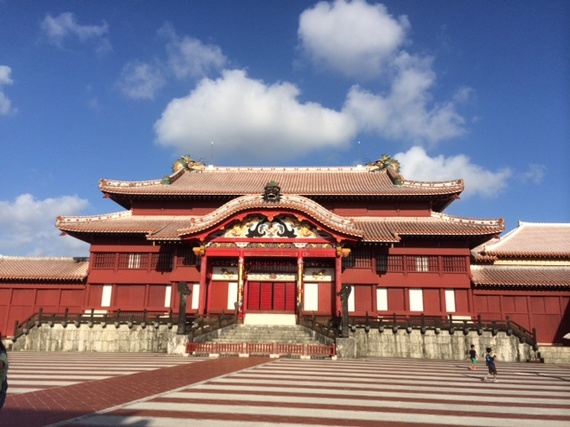 NAHA, Japan -- Japan has officially been taken off of life support. Prime Minister Shinzo Abe's hyper-active international schedule and renewed emphasis on global affairs has led to renewed relations with new partners such as Australia and India, while defense laws have been transformed to allow greater cooperation with traditional allies in America and Europe. Even in Asia where Chinese and Korean antagonism attempts to contain Japan, efforts both governmental and otherwise are being launched to grow closer to reconciling the ancient disputes that set them at odds politically and socially. With all these moves, many in Japan are also reconsidering their county's cornerstone relationship with the United States, including the 48 U.S. military facilities that are scattered throughout the country. In a recent trip organized by the Tokyo Foundation as part of the Trilateral Forum Tokyo which is a joint initiative with the German Marshall Fund of the United States I was able to experience for the first time the important role the Islands of Okinawa will play if the U.S.-Japanese alliance will survive Japan's growth from regional actor to global player.

As an American raised in Hokkaido, Japan's most northern island, I've traveled to almost every one of the 47 prefectures that make up this nation, with the exception of Okinawa. Japan's southernmost prefecture and archipelago that includes the hotly disputed Senkaku islands, this region is culinarily, culturally, geographically, and politically as far away from my home-island as one can get in Japan. Located closer to Taiwan and mainland China than it is to Tokyo, Okinawa has always been unique among the Japanese. Its history as the independent Ryuku Kingdom that tried to balance its trade relations between its larger Chinese and Japanese rivals was remarkably successful as it managed to borrow from both to create its own rich hybrid culture. The UNESCO World Heritage Shurijo Castle that hosted the G8 Summit in 2000 at first glance (pictured above) looks like a miniature version of Beijing's Forbidden City but retains several traditional Japanese elements including gardens and ingenuity in its design.

Having been forcibly brought into Japan's "sphere of influence" in 1609 and fully incorporated as the nation's last prefecture in 1879, it shares many qualities with America's last state of Hawaii. Similar to Pearl Harbor's position in relation to U.S. history, Okinawa is the only part of its domestic "mainland" that saw intense fighting during World War Two. The 200,000 lives, including civilians, lost during the Battle of Okinawa represented over 1/3 of the existing population, dwarfing almost any other battlefield from World War Two. The intensity of the fighting left scars on Okinawans both from the Japanese soldiers who encouraged mass suicides rather than capture and Americans who subsequently occupied the islands until 1972. For a naturally pacifist people who invented karate (translated as empty hands) as a means to protect themselves without weapons, the shadows of this history loom large.

The weight of history is palpable across the islands, but the ongoing tensions as a result of American military bases that are a legacy of this history have fostered a sense of both Okinawan exceptionalism and victimhood. The prefecture represents just 0.4% of Japan's landmass, while housing close to three-fourths of America's bases in Japan. As a result, Okinawans grumble consistently about the unfair burden-sharing they endure on behalf of Japanese national security and the U.S.-Japan alliance. On our trip, we visited Kadena Airbase, America's largest base in Asia which, according to its commander, could easily house a combined version of the Misawa, Yokosuka, Osan, and Pusan -- bases which do not exist in one territory but are themselves spread across Japan and South Korea. From deterrence against North Korea or an overly aggressive China to disaster relief efforts like those used in the wake of the Philippine typhoon to operations conducted immediately after the Great Tohoku earthquake of 3/11/2011, Okinawa provides a crucial jumping off point to America's critical and necessary role in the U.S.-Japan Alliance.

As China becomes increasingly more aggressive to U.S. allies in the region, America's significant presence in Okinawa has never been more necessary. But the devil remains in the details of how 33 military bases across the island can be most efficiently dispersed and leveraged. Unlike mainland Japan, Okinawa continues to grow demographically and is geographically poised to experience an economic boom of increased tourism from other parts of Asia, particularly Taiwan. This November Okinawans will vote on a new governor, establishing the future tenor of their prefectural government. Both Tokyo and Washington will follow the results closely. In discussing the U.S. bases, every official we met re-affirmed their support for the U.S.-Japan alliance, one American official even going so far as claiming silent majorities that favor America's presence despite the public vocal opposition to the bases. Polls showing that Okinawans tend to be more pro-American and anti-Chinese than mainland Japanese muddle the situation against a background of sensationalized press coverage. But after visiting I have a new appreciation for the beautiful paradox that is Okinawa.

A region thick with its own sense of exceptionalism but firmly planted in Japanese history, the Okinawan paradox is just the cultural bridge Japan is looking for. Quoting a famous Okinawan politician, during my time there I was assured that "to be Okinawan is to desire to be Japanese, but never be fully able to lose our Ryuku-ness." In another instance, a professor of Ryuku culture and history affirmed this dual nature, explaining that while he is proud of being Japanese he is first and foremost an Okinawan. However, although he introduces himself as a Ryuku while visiting China or Taiwan, given the more positive reception, the professor strongly believes that Okinawa has a natural bridging role to play amidst rising tensions between China and Japan.

Okinawa as a frontier nation is nothing new to its people. Chinese attempts to assert revisionist claims on the Senkakus and broader Okinawa don't seem to concern people on the island as much as it does Tokyo, and the recent Scottish referendum that captivated other small, nationalistic sub-states across the world was met in Okinawa with remarkable indifference. Amidst this geography, history, and myriad of paradox, Okinawa may just be the future of Japan's involvement in Asia. Rather than allow its exceptionality to remain a thorn in the side of the U.S.-Japan Alliance, Okinawa should transform itself into a model for creative and dynamic cooperation in a rapidly changing regional landscape.

The resurgence of Japan under Prime Minister Abe that has revitalized its foreign policy has encouraged Tokyo into joining negotiations for the Trans Pacific Partnership and to reinterpreting its traditional definitions of collective self-defense. All of Japan and by extension the U.S.-Japan Alliance will be benefitted by embracing the lessons of Okinawa's history, both positive and negative, from the independent trading state of the Ryuku Kingdom to the battlefields of World War Two. Continuing to engage locally and creating an inclusive framework to allow Okinawans to not only retain their uniqueness but shine as a result of it will be critical in the years ahead for both Americans and Japanese.