TOKYO (Reuters) - After Penguin Number 337 made a daring bid for freedom from a Tokyo aquarium and vanished into the waters of Tokyo Bay two months ago, many feared the worst for the adventurous feathered fugitive.

But the one-year-old Humboldt penguin has now popped up on video footage in a different part of the bay, frolicking in the water and apparently healthy.

The penguin, still too young to determine whether it is male or female and thus known only by a number, scaled a rock wall four meters (13 ft) high and squeezed through a barbed wire fence to escape its harborside aquarium in March.

"You can see it's got the same ring around its flipper and identical facial patterns," said Kazuhiro Sakamoto, deputy director of the Tokyo Sea Life Park, when shown footage of the tubby escapee taken by Japan's Coast Guard.

"It didn't look like it has gotten thinner over the past two months, or been without food. It doesn't seem to be any weaker. So it looks as if it's been living quite happily in the middle of Tokyo Bay."

Penguin 337 was filmed earlier this month near Tokyo's Rainbow Bridge.

In the days following the penguin's escape, the aquarium launched a city-wide appeal for tips on its whereabouts and sent keepers on daily penguin-hunts throughout the bay area.

They received hundreds of sighting reports, some from as far away as western Japan, but Sakamoto said most had probably mistaken cormorants for the flightless penguin. Only about 30 of the reports were thought genuine.

Tokyo Bay is a crowded and busy body of water bordering the densely-populated city, and the area around the aquarium consists of high-rise apartment buildings and concrete.

Many people had worried that the water was too dirty for the bird to stay healthy. More recently, reports of rising radiation levels in the bay have prompted concern.

"They say there's radiation in there, so I've got my fingers crossed that it can live in Tokyo Bay safely," said local resident Tateki Futagami.

The bird is probably gorging on small fish in the bay during daylight hours and returning to the shore at night to rest somewhere along the bay, keepers said.

The penguin, hatched in 2011, had shared life in a rocky outdoor enclosure at the aquarium with 135 other Humboldts and a number of other penguins prior to its escape. Sakamoto attributed its flight to a sense of adventure. 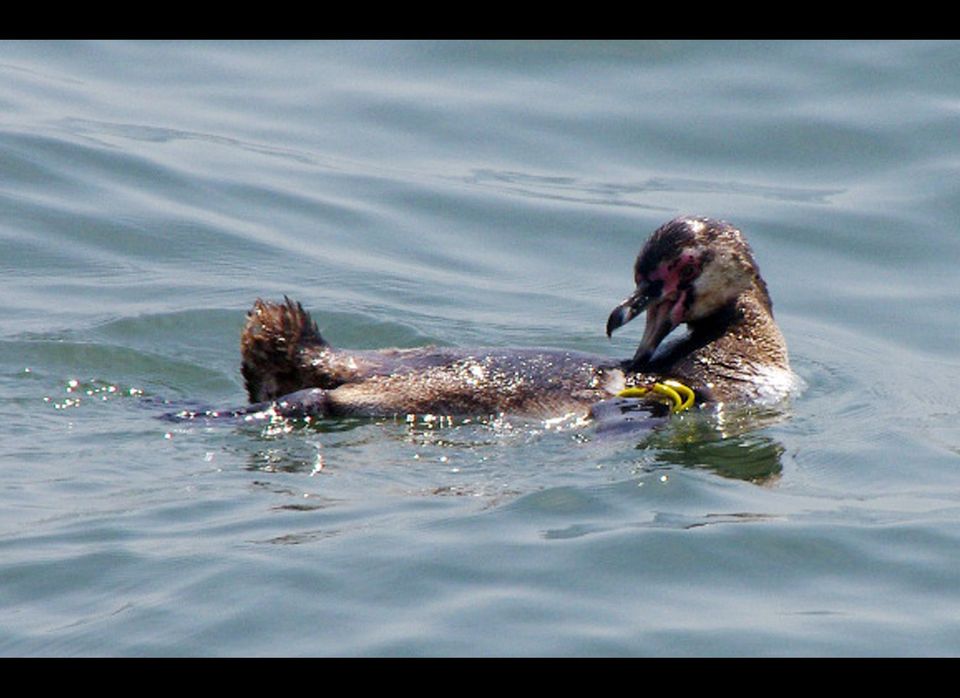