From its earliest interactions with Dutch and Portuguese traders, Japan has kept foreigners at a distance, struggling to maintain its unique cultural identity in our increasingly globalized world. Normative family values are so pervasive that gender equality has progressed with the speed of a striking snail, and public discussion of LGBT issues has been muted. And yet its rituals of hospitality are unrivaled in their intricacy and graciousness. 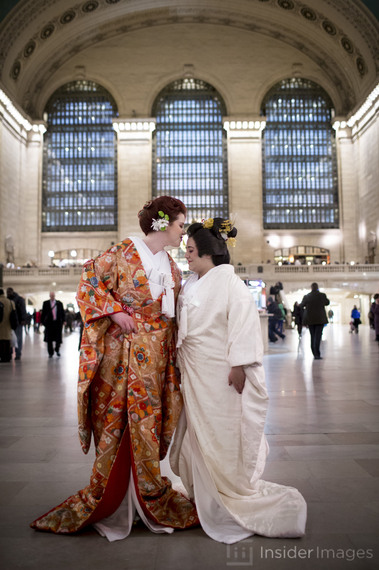 So travel insiders would not have expected a government-led outreach to lesbian and gay visitors. But in the wake of Tokyo's Shibuya district's plans to issue Domestic Partnership certificates to same sex couples, the Japan National Tourism Organization is rolling out an official welcome to LGBT visitors. And it started in a remarkably public way: with a traditional wedding dress demonstration with a lesbian couple in Grand Central Terminal.

Private businesses, like the Hotel Granvia Kyoto and Tokyo's OutAsiaTravel have been reaching out to LGBT tourists for years. But for a Japanese government agency to do so in such a public and integrated way is unprecedented. Very progressive marketing organizations in Greater Fort Lauderdale and St. Petersburg/Clearwater were the first destinations to integrate their tourism promotions, with gay and lesbian couples appearing alongside straight couples in morning television and outdoor advertising. It's a very recent trend, and Japan is on top of it, choosing a lesbian couple along with two straight couples to demonstrate the traditional wedding dress ceremony during JapanWeek, as if they'd been reaching out to LGBT visitors forever. In their beautiful kimonos, Brittany Boccio and Theresa Hittel addressed the audience, speaking of their love for Japanese music and each other. One of the three couples will win a trip to Japan, and you can vote for Brittany and Theresa here through March 3rd.

Executives from the Japan National Tourism Organization will be attending April's IGLTA Global Convention to plan their next steps for welcoming more LGBT tourists to Japan. If you'd like to learn more about visiting Japan, ManAboutWorld Magazine published an extensive digital guide in March, 2013. You can download it from the App Store or Google Play to read on any iPad or Android tablet.