Every day, 10,000 more Americans turn 65. The baby boomers are behind an unprecedented agequake that will shake up not only this country, but the rest of the developed world. How will this vast new market impact the economic and social landscape? What are the opportunities for business to interface and innovate with these new, mature, sophisticated audiences. "Infinia on Aging" will explore how the experience of aging is being reshaped -- and how it is reshaping consumer demand and behavior domestically and globally.

In this third installment in the series, we examine how a nation's fascination with robots might help ease the burdens of a fast-growing elderly population.

The scenario seems the stuff of pulp science fiction: An isolated civilization rapidly ages, with too few youngsters to support a growing population of old adults. Leaders instead look to build the next generation out of robots.

It's reality in today's Japan, where growing longevity and a falling birthrate are rapidly aging the island nation.

Japan is just the extreme example of aging around the globe. In looking ahead a few decades, the United States also faces a daunting task in adjusting to a population that will be significantly older than it is today. But America is in much better shape than its allies.

A number of countries already have populations significantly grayer than the United States. The oldest countries in the world include Finland, Italy, and Germany -- where the median age in 2010 was almost 20% older than the 37 years for U.S. residents. Germany is just the world's second-oldest country, with Japan leading the pack at 45 years. While the residents of these countries are living longer, they're also having fewer babies. And compared to the United States, they also welcome fewer immigrants, which is an extra source of young families.

The shift in Japan is unique among major countries. By 2050, Japan's population will have aged nearly 20 percent more to a median of 53 years old. The trend is so rapid that the island nation has become a trailblazer for aging-related policies. "Japan is like a laboratory -- a canary in the coal mine," Koichi Akaishi, an analyst at a government-related think tank in Japan, told the Wall Street Journal.

Also peculiar to Japan is a rush to retiree technology, particularly a fascination with robots. Leading industrialists argue the mechanized assistants can not only help fill the nation's manpower gaps, but also care for its elderly. The Japanese government has joined with vast subsidies to encourage the development of "service robots" that could help feed, dress and otherwise care for Japan's older citizens.

Robots are also a focus of elder-care research elsewhere, including the United States, where applications include aides for health care and rehabilitation. U.S. hospitals will deploy thousands of "service robots" in the next few years to help with the menial labor that accompanies a growing American elderly population, the Wall Street Journal recently reported. The robotic couriers might carry medications or a load of laundry down hospital corridors.

With its faster-growing elderly population, Japan has been quicker to embrace robots. In 2005, Japanese factories were using more than 370,000 robots, according to the Associated Press, which is three times as many as were active in the U.S. A 2007 plan from Japan's Trade Ministry projected that one million industrial robots could be installed by 2025, and with an industrial robot typically as productive as 10 workers, they could replace about 15% of Japan's workforce.

Some of Japan's robots have that humanoid look of science fiction, reflecting a Japanese fascination in movies and literature with mechanized friends who look like us. Well known is the Asimo from manufacturing giant Honda, whose two-legged movements appear remarkably human even if its face is a blank mask. Competitor Toyota has an android that can play a trumpet by actually blowing air with its lips against the horn.

Both companies say their robots are prototypes for future, more sophisticated versions that could, among other uses, serve as mechanized aides for the nation's elderly.

More practical for the near term are robots that don't look like a human. Panasonic, for one, has demonstrated a bed that can convert into a wheelchair on voice command, as well as a robot designed to help wash the hair of the elderly who are losing use of their arms. "Our concept is to provide a total solution for the silver society, not only for Japan but also the world," a Panasonic executive told Agence France-Presse. 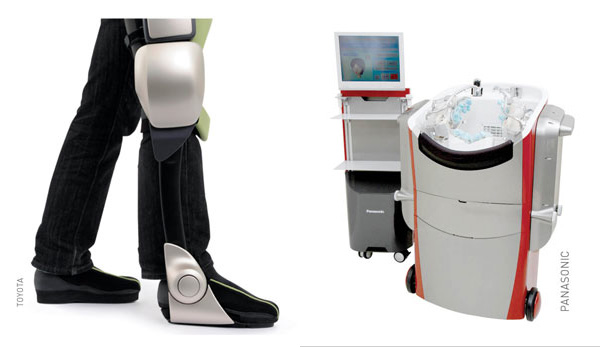 Toyota last fall unveiled four examples of "partner robots" to help patients. While none look human, three would help with rehabilitation, and one would help aides move patients in and out of beds. An example is the Walk Training Assist robot that would mount onto a paralyzed leg and guide a patient's steps when sensors detect movement of the hips that the machine interprets as an intention to walk. The robot would help swing the knee and leg forward.

Skeptics equate the robot cure with high-tech quackery, arguing the country should instead face difficult social issues that include Japan's aversion to immigration. "The government would do much better spending its money to recruit, educate and nurture immigrants," Hidenori Sakanaka, director of the Japan Immigration Policy Institute, a Tokyo research group, told the Post. "Robots can be useful, but they cannot come close to overcoming the problem of population decline."

Proponents acknowledge that the dependence on robots might create some discomfort.
"People are still asking whether people really want robots running around their homes, and folding their clothes,'' Damian Thong, an analyst at Macquarie Bank in Tokyo, told the Associated Press.

"But then again, Japan's the only country in the world where everyone has an electric toilet," he said. "We could be looking at a robotics revolution."

Next: A generation's attraction to fads and cultural identity spurs a market for specialized retirement housing.

Founder and CEO of Infinia