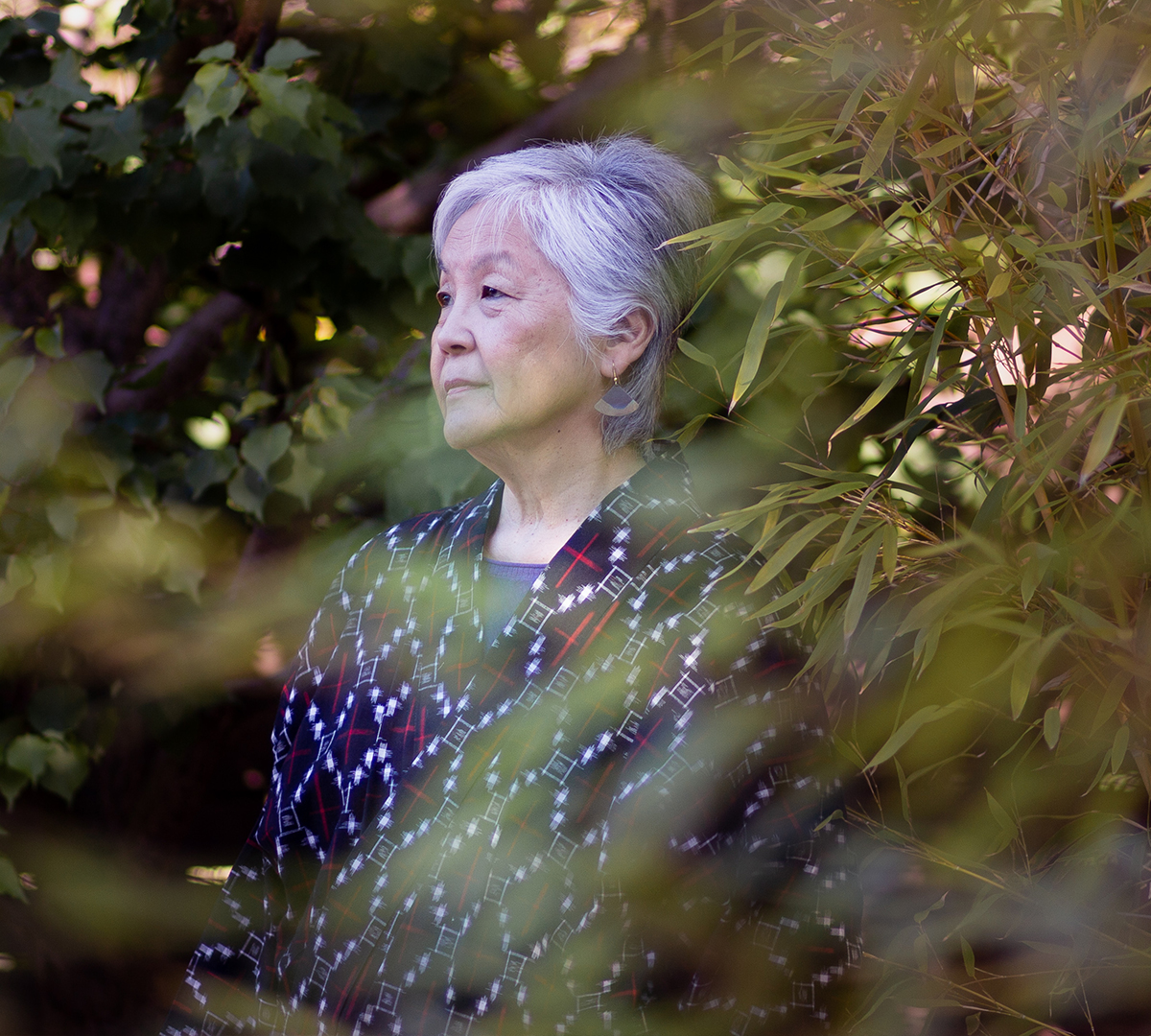 Americans of Japanese ancestry got a check and formal apology for their unjust incarceration. These activists say Black Americans deserve the same.

Masuo, my great-grandfather, died before he could get a reparation check.

Two armed FBI agents arrived on his doorstep on Dec. 12, 1941, and detained him without charges. He was shuttled from one Department of Justice detention center to another for the entirety of World War II and wasn’t released until January 1946. Those few years of trauma guaranteed he would never really be OK again, and I believe it was the heavy weight of shame — of losing everything he’d spent his whole life working for — that killed him.

That is partly why many of my family members — including Masuo’s last living child, my 96-year-old grandfather — have protested with Tsuru for Solidarity, an activist group led by Japanese Americans. Tsuru believes that Japanese Americans can heal the past by working in solidarity with other oppressed communities in the present. Its goal has always been for Japanese American survivors of incarceration (and their descendants) to be the allies they never had themselves.

Satsuki Ina, a co-founder and co-chair of Tsuru for Solidarity, was born in 1944 in the Tule Lake segregation center, a maximum-security prison camp in California for Japanese Americans during World War II. In 2019, she was part of a group of protesters — many of them survivors of the wartime incarceration — who hung thousands of tsuru, or origami cranes, outside a immigrant detention center in Dilley, Texas, “to let the children inside know there were people who cared about what was happening to them.” 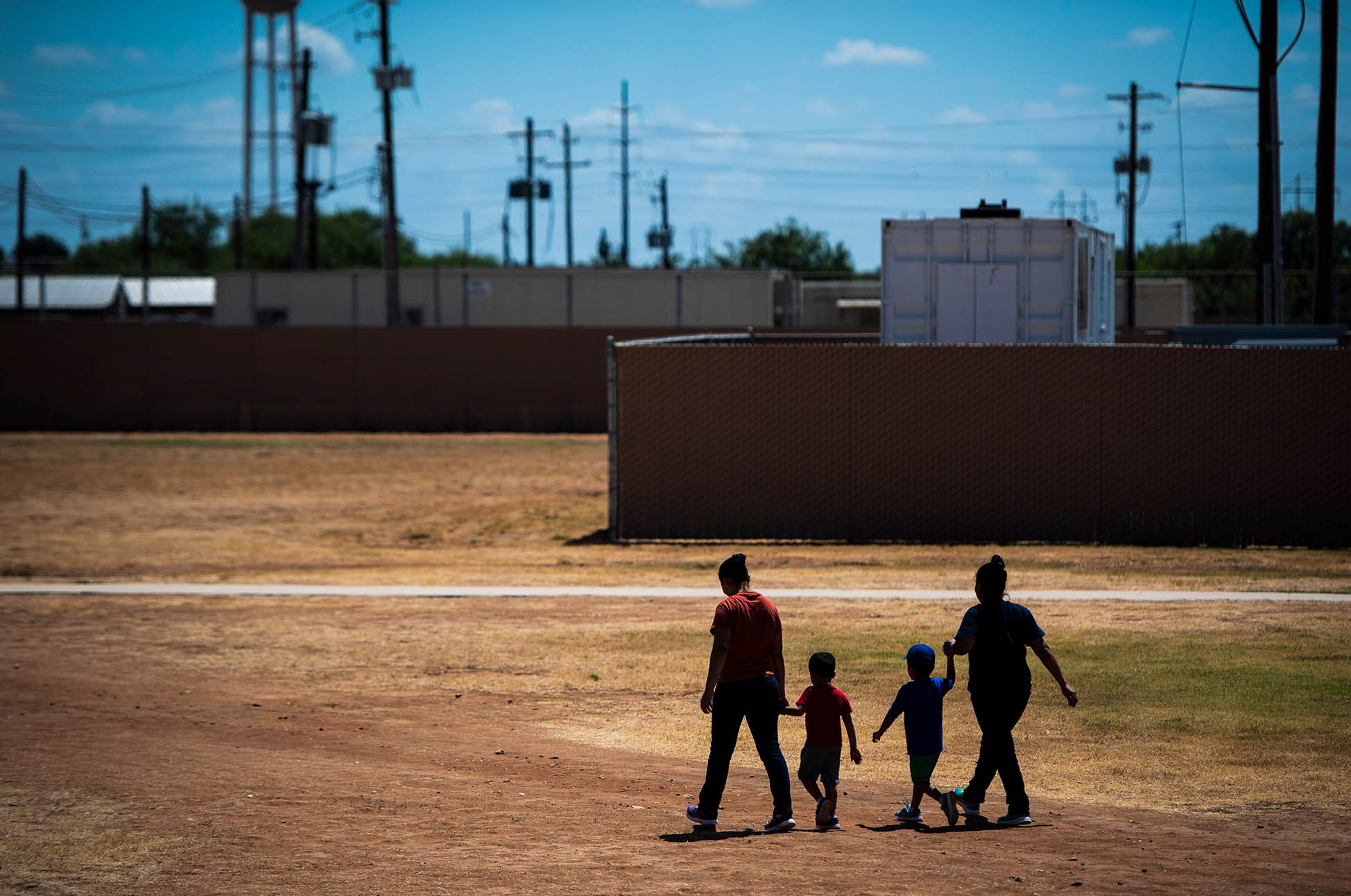 Since then, the group has been protesting with local immigrant rights activists and religious leaders at immigrant detention centers around the United States. “When we work across communities, this is where we grow our power to be able to change policy and practices designed to oppress people,” Ina says.

Yet last year, after the police killing of George Floyd, a 46-year-old Black man in Minneapolis, and the racial justice protests that followed, Tsuru for Solidarity realized it needed to further expand its solidarity efforts. In what Ina called a “natural evolution” of the group’s work, Tsuru began supporting the effort to pass H.R. 40 — a bill in the U.S. House to establish a commission to study the institution and legacy of slavery in the United States and recommend how to compensate the descendants of African Americans who weren’t even allowed to have what my great-grandfather lost.

Japanese American support for H.R. 40 makes sense for many reasons, among them a firsthand understanding of why reparations matter. I can only imagine how redress and a presidential apology might have helped make my great-grandfather whole again, restored his sense of dignity and self. After a hard-fought, multigenerational effort that finally gave former camp survivors permission to speak about their losses and grief, President Ronald Reagan signed the Civil Liberties Act in 1988 — and my grandparents, who were imprisoned as teenagers, received the formal apology and cash payments that had eluded their parents. 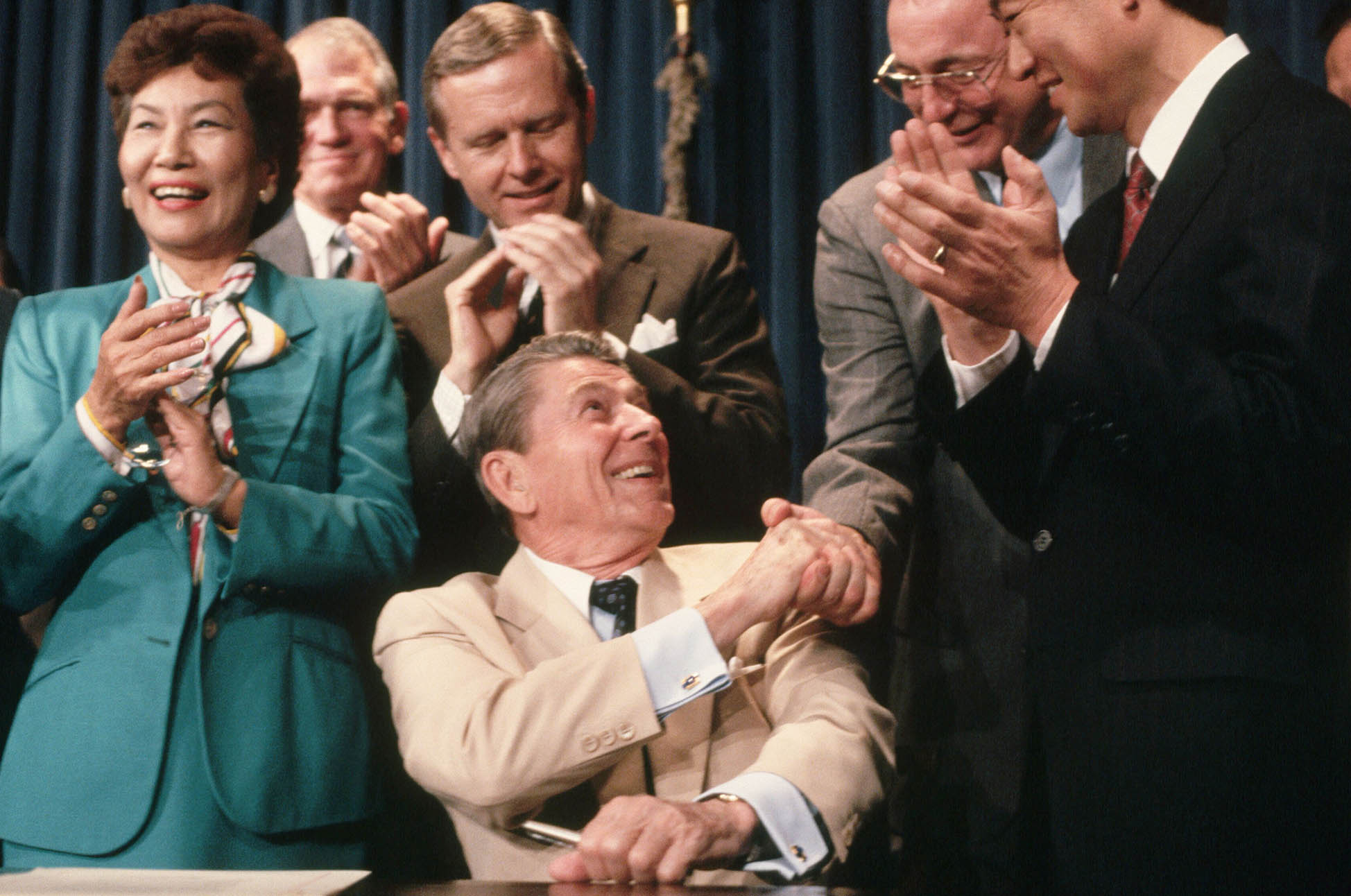 President Ronald Reagan celebrates with community leaders and politicians after signing the Civil Liberties Act of 1988.

Still, historical precedent alone hasn’t been enough to convince other Americans to accept the idea of Black reparations. Ever since Rep. John Conyers (D-Mich.) first introduced H.R. 40 in 1989, the bill has been languishing. Conyers died in 2019, and Rep. Sheila Jackson Lee (D-Texas) is now the lead sponsor of the legislation, joined by more than 170 co-sponsors. In a historic step forward, the House Judiciary Committee voted on April 15 to advance H.R. 40, but it still faces an uphill battle.

Tsuru for Solidarity has taken various approaches to drumming up public support for H.R. 40 — first of all, by mobilizing Japanese Americans. Those efforts have already led to some important moments, including Japanese American activist Kathy Masaoka’s powerful testimony in support of H.R. 40 at a House Judiciary subcommittee hearing in February, Tsuru’s letter to the Judiciary Committee the same month, and an ACLU forum on H.R. 40 in which Japanese American and African American speakers united in calling for reparations.

Lisa Doi, a Tsuru co-chair based in Chicago, told me that after Tsuru called for letters to Congress, she received more than 300 testimonies from Japanese American camp survivors and their descendants urging lawmakers to pass the bill.

“It’s an era where you put petitions online and people fill out the form — but this is people who sat down with a blank piece of paper and said why they support this legislation,” Doi said. “I was the person who received them by email, and I was able to look at them, and they were these really meaningful personal statements.”

Doi pointed to the coronavirus pandemic and the police shootings of Black Americans last year as reasons for the show of support. Without commenting on H.R. 40’s chances for passage, she noted, “Radical change might feel more realistic at a time when people have experienced tremendous upheaval in their lives.”

“In the last 18 months, between the pandemic and quote-unquote uprisings in response to the murder of George Floyd, I think it has expanded the imagination of what might be politically possible,” she said. “Maybe it’s a moment when America is ready and able to grapple with the racist and structurally violent parts of our history.” 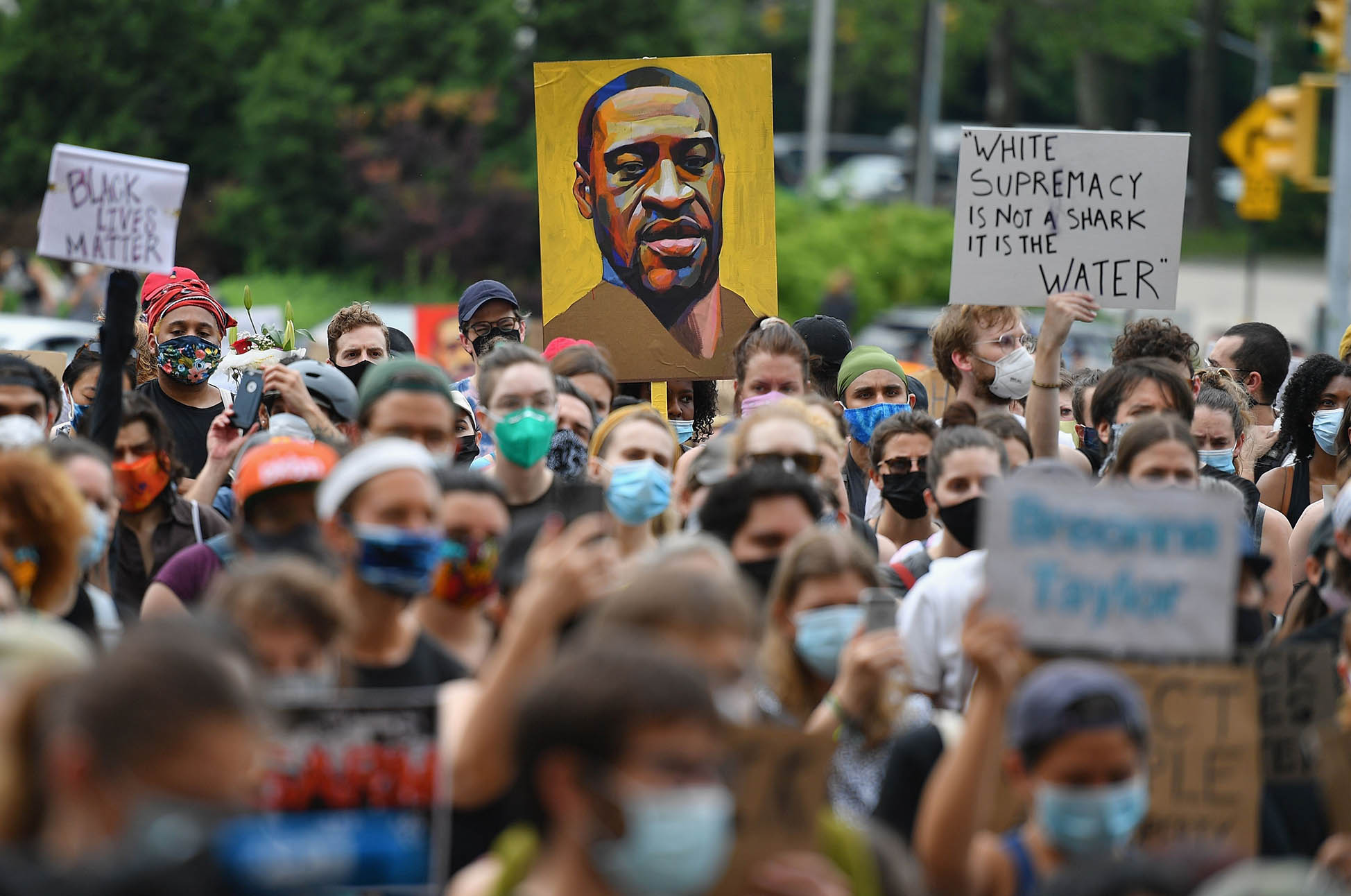 A protester holds up a portrait of George Floyd during a Black Lives Matter demonstration in front of the Brooklyn Library and Grand Army Plaza on June 5, 2020, in New York City.

It is something members of Tsuru for Solidarity have been trying to grapple with themselves. For H.R. 40 to really have a chance — and for Japanese American support for the bill to be more than a feel-good exercise — it must be accepted and unquestioned that Black lives matter, including in our own community.

“During the Black Lives Matter actions that were taking place, we definitely realized that Japanese American communities needed to look at their own anti-Blackness,” Ina said.

“I went to school in San Francisco with mostly Black kids after the war, but our communities remained pretty divided,” she remembered. “I don’t think people talk about it, but there was this community ethic that the more we identified with — what you millennials call our proximity to whiteness — the more we would be safe from losing our freedom again and being victims of hatred.”

Ina told me that, along with mobilizing support for H.R. 40, Tsuru has organized a series of intergenerational workshops on anti-Blackness specifically for Japanese Americans. And just recently, she said, she personally began holding healing circles in Oakland’s Chinatown to help Asian American organizations in the Bay Area share how they are processing recent acts of anti-Asian hate, a discussion she ultimately hopes to open up to Black community members as well.

“We’re trying to have an influence on the way we look at each other,” she said. “The source of this is the racism that we’ve all shared, that we’ve experienced as victims — and how do we connect with each other. So I feel these healing circles can be very profound in our relationship with each other and building power together.” 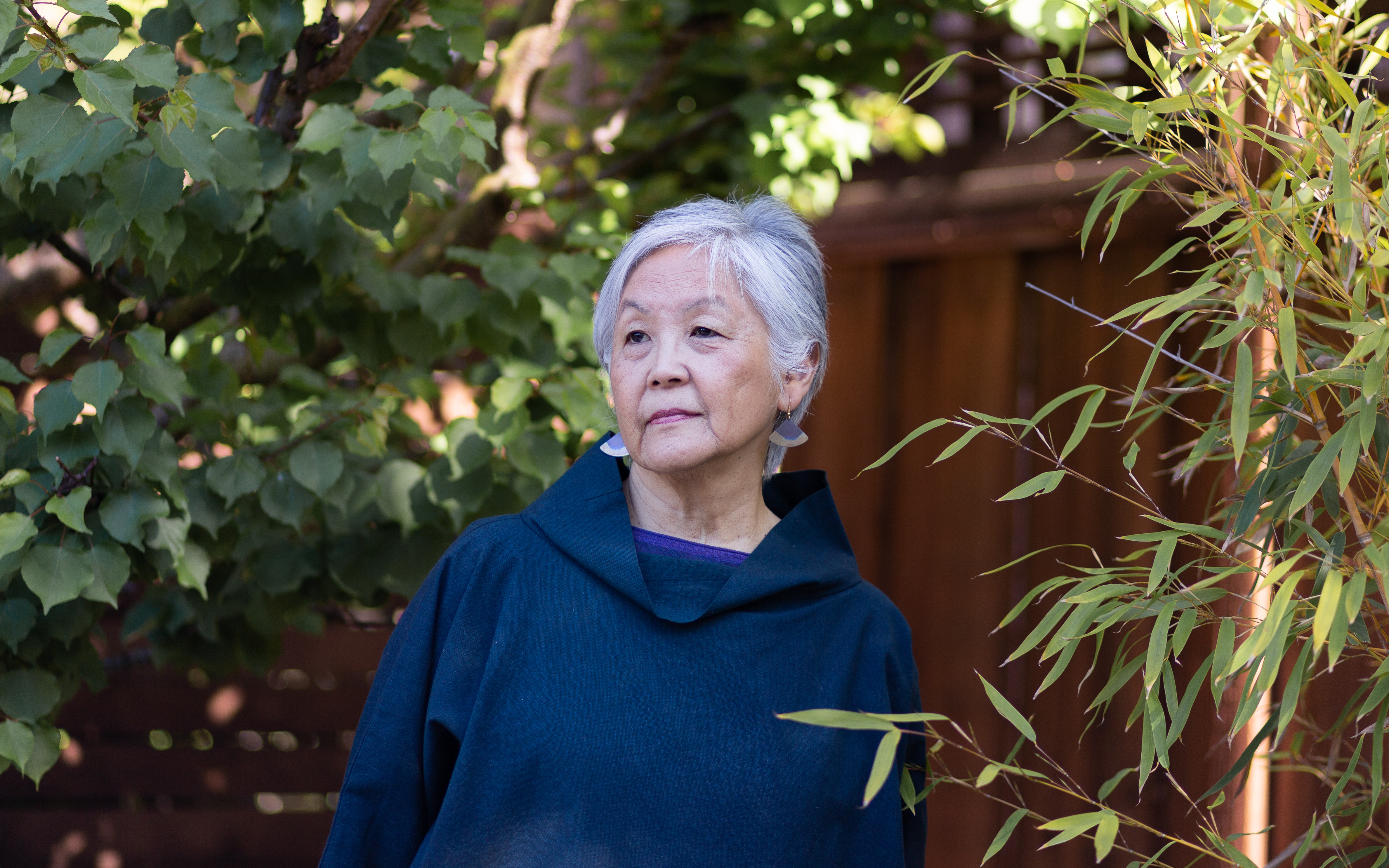 Satsuki Ina, co-founder and co-chair of Tsuru for Solidarity.

Meanwhile, Duncan Ryuken Williams, another Tsuru co-chair who is also a Buddhist priest and director of the Shinso Ito Center for Japanese Religions and Culture at the University of Southern California, is running a reparations-themed virtual event series and book club. From January through July, participants will read and discuss texts including Isabel Wilkerson’s “Caste” and Ta-Nehisi Coates’ “The Case for Reparations” alongside books and articles about Japanese American redress.

“Until we solve long-standing fractures and unaddressed racial animus, we can’t become whole,” he said of the importance of fighting for reparations in solidarity with Black Americans.

To illustrate this, Williams described a Japanese pottery technique called “kintsugi” — the artistic practice of putting broken ceramics back together with a golden lacquer that adorns their former fracture lines. The point, he said, is not only to repair and make an object whole again, but to honor its history rather than minimize it.

“Because I’m a Buddhist priest, this metaphor is what made the most sense to me,” Williams explained. Not only in terms of “financial recompense and gold,” he added, “but also, at the deepest level, how can we do that at the psychic or spiritual level so those hurts can be healed and alleviated?”

“The answer, if I have one, is in that word: solidarity,” he told me later.

“There’s a mountain of suffering out there, and we can’t address and solve it as one person. We can only repair it collectively and in solidarity and together.”